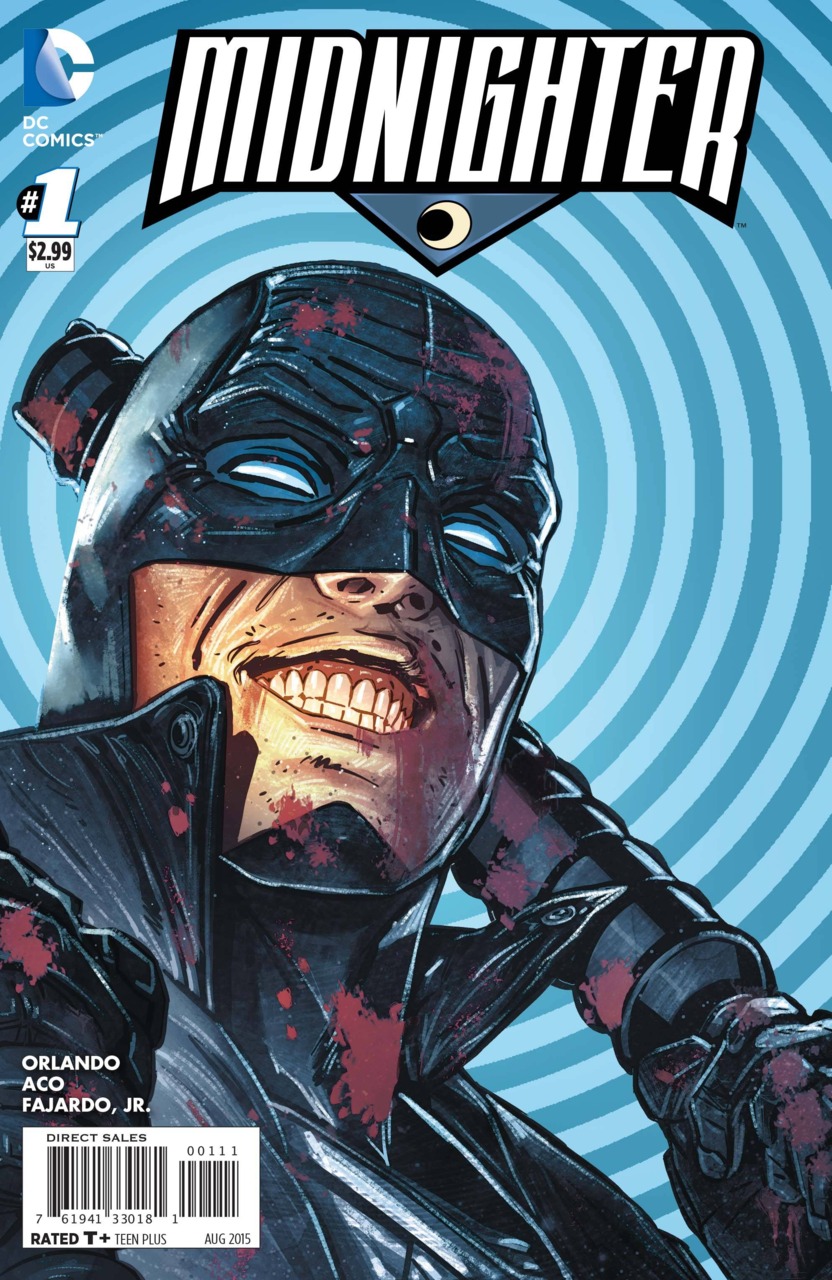 The premier edition of Midnighter opens at the God Garden where the Gardener is being pursued by an unknown assailant. The intruder defeats her drone, bio-grenade and bacterial sentries in an effort to rob the God Garden for what he calls the Dragon’s Gold.

Meanwhile in Oakland, Midnighter is having a first date with Jason in a fancy restaurant. Jason reviews his Grindr profile with the growing understanding of exactly what a badass his crime fighting dinner companion is.

Suddenly Midnighter’s precognition kicks in and he tells Jason to get down on the floor. A team of aliens appear looking for Mordan traitors that happen to be in the restaurant. There is a shootout amidst the diners and a flash grenade goes off blinding Midnighter. Since our hero has super healing powers this just serves to make him mad, and when he gets mad the fun begins. By using his precognition he determines the most efficient way to defeat the attackers. The poor saps never had a chance.

After the excitement (and the date) is over Midnighter heads to one of his hangouts, a Pool Hall in Boston. Pro tip: don’t bet against Precogs playing pool.

Midnighter’s and Jason’s second date is in Moscow. Jason learns about the door that Midnighter can summon to take him from his apartment to anywhere he wants. Midnighter decides to take Jason home and after hours of sex he injects a Smartmark into him. This allows Jason to contact Midnighter any time he is in trouble.

Suddenly Midnighter gets summoned by the Gardener. He teleports to the God Garden where he learns of the intruder that robbed the space station. Midnighter complains that this is her problem not his. The Gardener tells him that she had an origin file on him. The Gardener created Midnighter out of a regular human but had previously told him that she had destroyed all the information on who he was. Now she says that this was a lie and the intruder made off with that file. This is enough to put him on the job. To be continued…

There are a couple of things that a first comic in a series has to accomplish. Since Midnighter isn’t popular as Batman or Superman readers need to be educated on who he is and why we should be interested in this guy. In that way this comic succeeds in spades. We get the powers: precognition, healing, summoning and super fighting. We get the personality: aggressive, wisecracking and brutally honest. And his attitude to his work: he uses his powers to help good people, but doesn’t consider himself good because of his enjoyment of violence and mayhem.

So in that sense this story did what it needed to. His powers and personality were shown through some fights and personal interactions. Also, his ‘mission’ to catch the thief and learn his true identity was established. Plotwise this is outstanding.

One interesting thing about Midnighter vs. other Superheros is that there isn’t a division between his crime-fighting life and his personal life. There is no alter ego, just Midnighter. He knows who he is: a violent, gay, superpowered badass and isn’t afraid of letting people know. He doesn’t have to shout it – he just is. It would never occur to him to engage in the dual personality that is central to most super crime fighters. It is a refreshing approach to both a Super Hero and gay man. He isn’t only out of the closet in both cases, there is no closet, there never was a closet, there could never be a closet.

I like most of the art in this comic. It is consistently drawn and some of it is extremely beautiful. The action scenes can get a little confusing however. It took me a couple of read-throughs to thoroughly understand what happened in the fights. Unlike most comics I have this problem with, here the extra work is rewarded by very interesting visual storytelling. It was worth the effort and then some.

There is an interesting visual motif of rapid, small panel closeups of various details of the action. There is a problem that some of these are too small and hard to decipher. Another interesting detail is that sometimes violent action is shown through x-rays in the panel, I appreciate not having to see some of the more gory details of the fight.

All in all this is an excellent start to the series. I am going to ding the rating a bit for the confusing fight sequences but I expect that this is just the beginning of a very interesting comic. I look forward to more adventures with Midnighter.