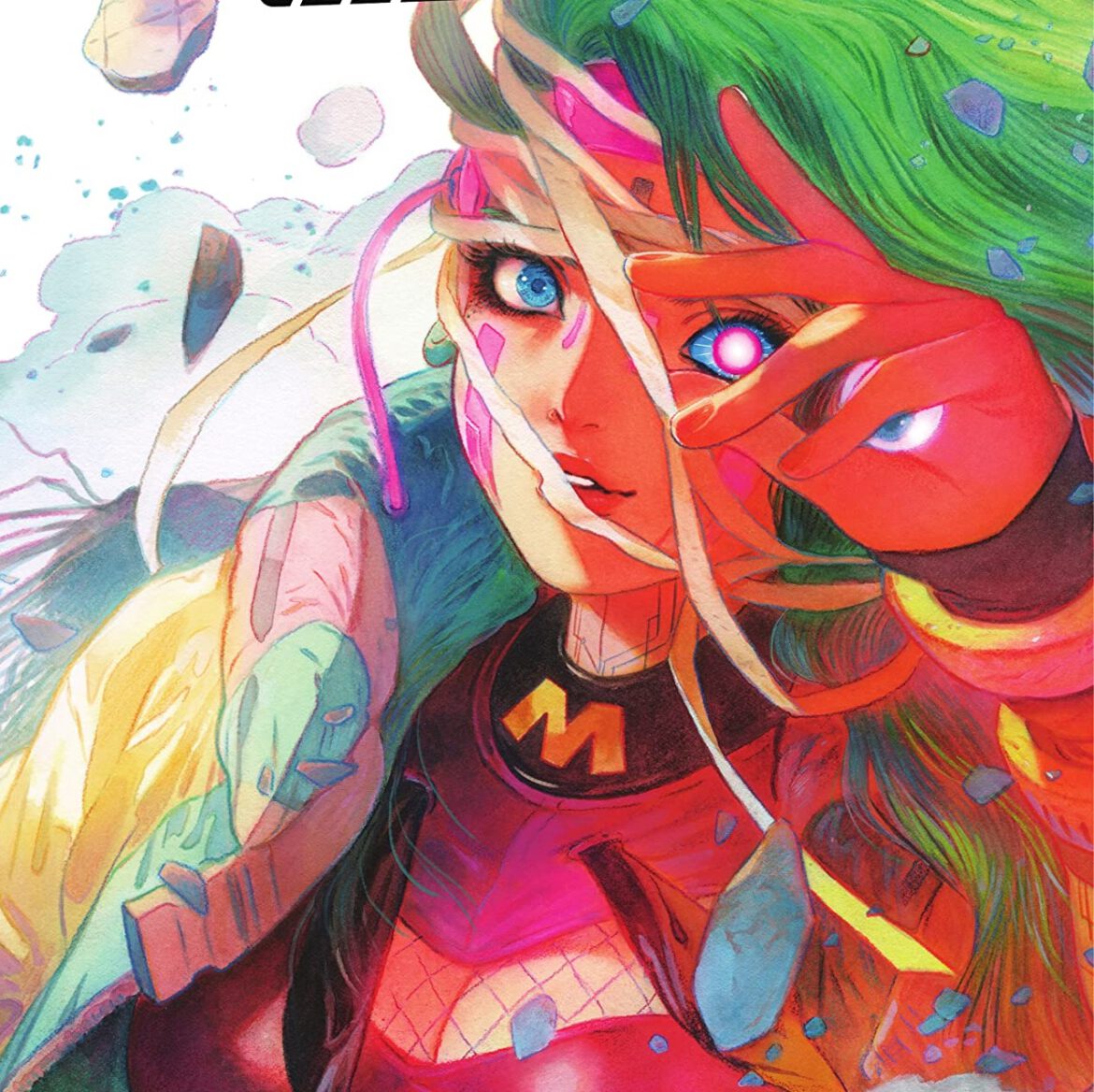 Overview: In Batman Secret Files: Miracle Molly #1, we learn the origin story of Miracle Molly and how she came to join the Unsanity Collective.

Molly identifies the target. It’s a fiberglass box worth $15 million, which will be used to fund Unsanity Collective endeavors. While she prepares the box for transport, a young man at the table recognizes her, calling her by the name of Mary.

Flashback to before becoming Miracle Molly, and Mary Kowalski is depressed and late to work. Her husband wakes her up and helps her get dressed. She rides the train to Helios Robotics, where she works on small-time pieces of electronics. She dreams of creating more, but her boss turns down her ideas, asking her to just do her job. Mary sits at her desk, alone, with a reflection of Miracle Molly sadly looking back at her from the computer monitor.

At home, Mary is as dispassionate in her relationship and home life as she is at her job. The only pleasure she receives is when she goes into her computer room. Her screen name is Miracle Molly, and online she communicates with Master Wyze, who reaffirms her feelings of being an outcast in the world.

Her life is very much “rinse and repeat” in this way. She goes to work, comes home, makes love without passion to her husband, and signs onto the computer, where Master Wyze tells her about his mind machine, one that will strip her of her old life, so she can actualize her true self without limitation. Her everyday life is a world in which men tell her what to do, but a specter of Miracle Molly watches her from afar, a reflection in the machines she surrounds herself with.

At dinner with her in-laws, her father-in-law floats the idea of her bearing a child. Mary’s husband, Matsuda, tells her that they could turn her computer room into a nursery. Reflected in the wine glass, the apparition of Miracle Molly screams.

As the days go by, Mary distances herself more and more from the world around her, and the world, in retaliation, bears down its will upon her. Her mother tells her to accept her lot in life and start a family. Her husband, Matsuda, tells her to pitch her ideas, and if they don’t work, settle and bear him a child.

The next day, Mary storms into her boss’ office and pitches her ideas to her boss and his managers. She is promptly fired, and as she is walking out of Helios Robotics, she mentions that she will take her ideas to a smaller firm. Her boss stops her, grabs her notebook, and tells Mary that her ideas belong to the company. She cannot just take them to another firm.

Later that night, Mary breaks into Helios Robotics and tries to steal back her ideas. Her boss catches her, and just as he’s about to call security, she whacks him in the head with a phone, which sends him crashing into a computer monitor. The boss dies, and Mary flees.

Mary tracks down the Unsanity Collective and takes up Master Wyze’s offer to use his mind, thus transforming herself into Miracle Molly.

In the present, Matsuda pleads with Miracle Molly, telling her that she’s his wife and has been missing for a year. She fights Matsuda off, telling him that Mary is gone. The Unsanity Collective steals what they came for, and Miracle Molly leaves her old life behind… for good.

Analysis: Batman Secret Files: Miracle Molly #1 is the origin story that we didn’t know we needed, and it’s absolutely beautiful. The art, penciled by Dani Strip and colored by Lee Loughridge, carries a neo-noir, sci-fi edge to it. It’s not too unlike a bleak, futuristic outlook seen in the likes of Blade Runner or in the pages of Judge Dredd. Gotham feels dirty, alien, and cold. The cityscape feels massive and resonates with the theme of Miracle Molly having to lose herself as Mary Kowalski before she can be fully reborn.

This story is heartfelt, haunting, and poetic. It really captures the feeling of hopelessness and being eaten alive by everyone and everything around us. At every turn, Mary is being told what she likes, what she doesn’t like, what’s good for her, and what her next move can be. No one, neither even her husband nor her mother, is there for her. The death of Mary Kowalski is truly the death by a thousand cuts as the creative team takes us through day after day of this demeaning and belittling routine.

The lack of passion on Mary’s face throughout is arguably the most haunting feature of all, especially during her most intimate moments when she’s lying in bed as Matsuda makes love to her limp body. Life seeps away with every dawn, which is what ultimately sells the idea of how a person can become someone like Miracle Molly and join an organization like the Unsanity Collective. When the Unsanity Collective was first introduced in Batman #106, the concept seemed far-fetched and lacking in context. In this Batman Secret Files issue, writer James Tynion and Dani Strip do a fantastic job, finally, selling readers on the importance of the Unsanity Collective and why it exists.

The endpoint is, there’s real pain and sorrow in Miracle Molly’s story, and it’s one many of us can probably identify with. It’s in the silence. It’s in the incredible, unique paneling from Dani Strips. It’s in the muted, dreary colors from Lee Loughridge. And it resonates. Truly.

As a side note, the design of Mary Kowalski when she’s at work seems oddly reminiscent of Michelle Pfeiffer’s turn as Selina Kyle in Batman Returns. That might be me projecting, as Mary’s final moments with her boss are similarly reminiscent of Selina’s final moments in the film before her transformation into Catwoman, or it could be intentional. Either way, both of these stories echo but also stand on their own as haunting reflections of the way women are sometimes treated in society.