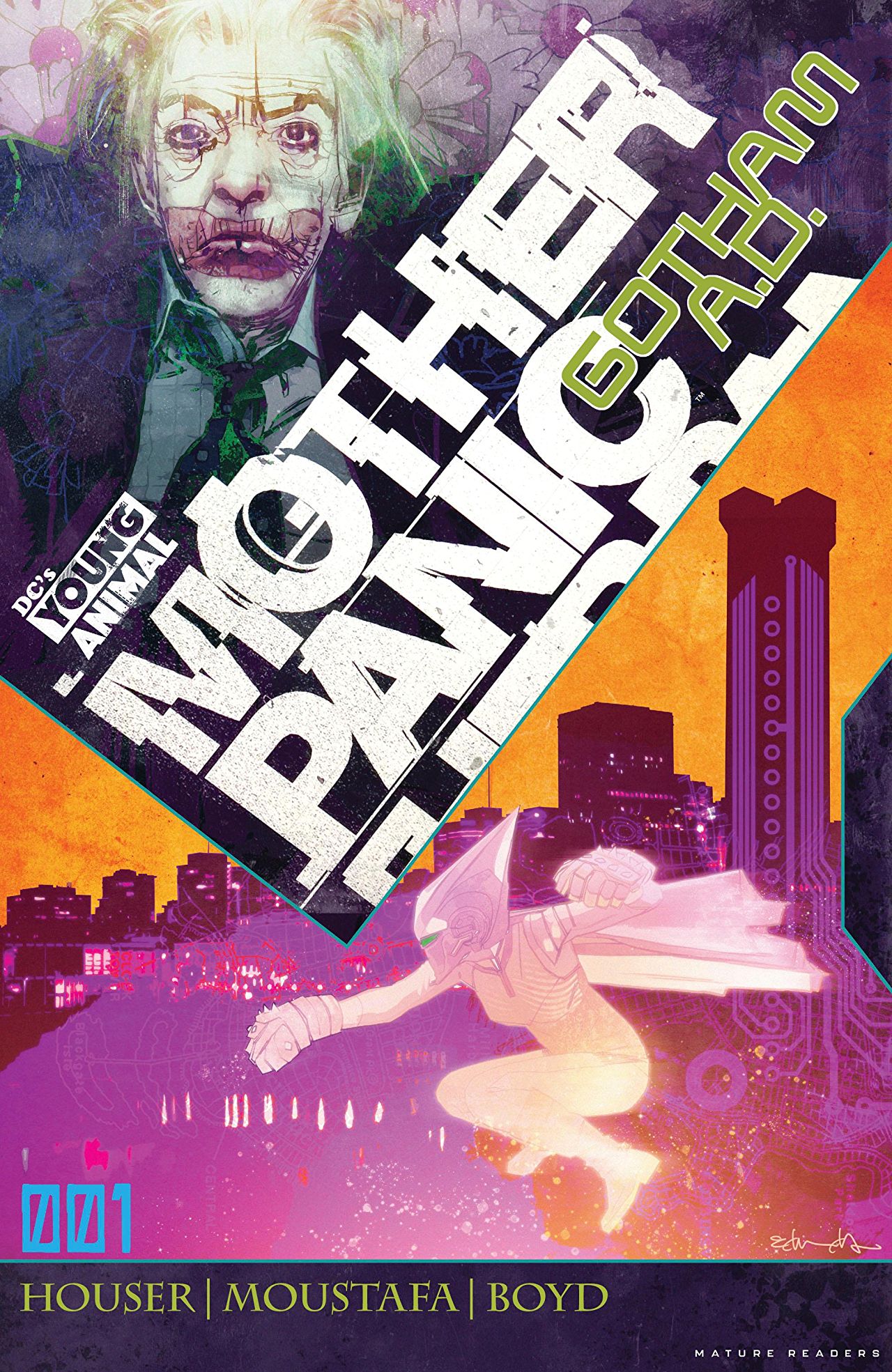 Overview: Violet Page has to deal with the changing face of post-Milk Wars Gotham city. Friends and enemies have been altered by the event. How does Mother Panic fit into the new world

Synopsis (spoilers ahead): Violet Page has survived the Milk Wars only to find herself in a Gotham she barely recognizes. The ruins of her old hotel/home still stand. Otis, also known as Ratcatcher, still lives there though he seems sourer than he used to be. Also, Rosie, one of the children Gala kidnapped (and whose parent’s were killed right in front of her) is around. But Violet’s mother and friends are nowhere to be found.

Rosie is out looking to get some groceries, dressed in a cape, mask and long ears. She comes upon a smartly dressed man, Pretty, demanding protection money from the shop in the name of The Collective. There is a back and forth between Pretty and Rosie and she stabs Pretty in the leg and chases him away. She is thanked by the shop-keeper but demands food in exchange for her ongoing protection.

Gala is at a superhero costume fashion show displaying some of her designs. Victor Paige, Violet’s brother, asks Gala to visit the Oracle.

Back at Violet’s Rosie tells Violet and Otis about meeting Pretty and running him off. Violet says she knew Pretty from their old world where he had his face eaten by Otis’ rats. Not so in this new reality. A message comes in and Otis says that he might know someone that can help her find her mother.

Violet gets in her Mother Panic gear and heads over to what looks like the Coney Island boardwalk to meet Otis’ contact. It is Joker.

Joker seems to be a broken man. He says that Batman never came back after the crisis that destroyed reality no matter what terrible things he did to lure him out. He also says that he has heard of Violet’s mother from a stint in Arkham and that she should go to Robinson Park.

Gala brings Victor Paige to a basement cell in Arkham Asylum to meet the Oracle. Oracle is his and Violet’s mother. Until Next Time…

Analysis: Writer Jody Houser has created a new Gotham that has been forever changed by the Milk Wars event. Violet, who never handled the normal world very well, struggles to find her place in this new Gotham. Seeing Joker a beaten man, sitting on a park bench talking near-nonsense was pretty powerful. Houser explored what Joker might be like without Batman, his opposite. It is an interesting study and one that will hopefully be explored further in this AD story.

It was also good to see Rosie, hardened by her experiences, coming into her own as an independent player in this new world. She is tough and not afraid to intimidate anyone that shows weakness. Though I did read Milk Wars (and liked it) I am not totally sure what the ground rules of this new world are. Characters have been dramatically changed by the shenanigans of Retconn and some of the events of past Mother Panic stories have been erased (like Pretty’s face being eaten by rats).

Having Violet’s mother now known as some kind of seer makes sense and was telegraphed in the original Mother Panic book. Why her name is now Oracle, Barbara Gordon’s famous handle, is unclear. I expect we will find out more about these items in future issues.

Interior art is by Ibrahim Moustafa, interior colors are by Jordan Boyd and Marissa Louise, and lettering is done by John Workman. Mother Panic has always had a gritty, in some ways ugly, look about it and that hasn’t changed here. The figure of Joker sitting on a boardwalk bench is haunting with just glimpses of his face visible underneath his threadbare hoodie. He is portrayed as a tragic figure and his look perfectly fits the dialog.

Rosie is also drawn particularly well. She looks like a little girl playing dress-up until she opens her mouth and her face shows her to be a defiant young girl that is tough as nails. Again, the art and the script are perfectly in sync.

I was a big fan of the original Mother Panic and it looks like this story will follow suit. The cast of characters surrounding Violet has a lot of potential and I hope we get some answers about the nature of the changes in reality post-Milk Wars.

Final Thoughts: In a grimy future Gotham, Violet Page struggles to put her life back together with danger lurking all around her and her accidental family.