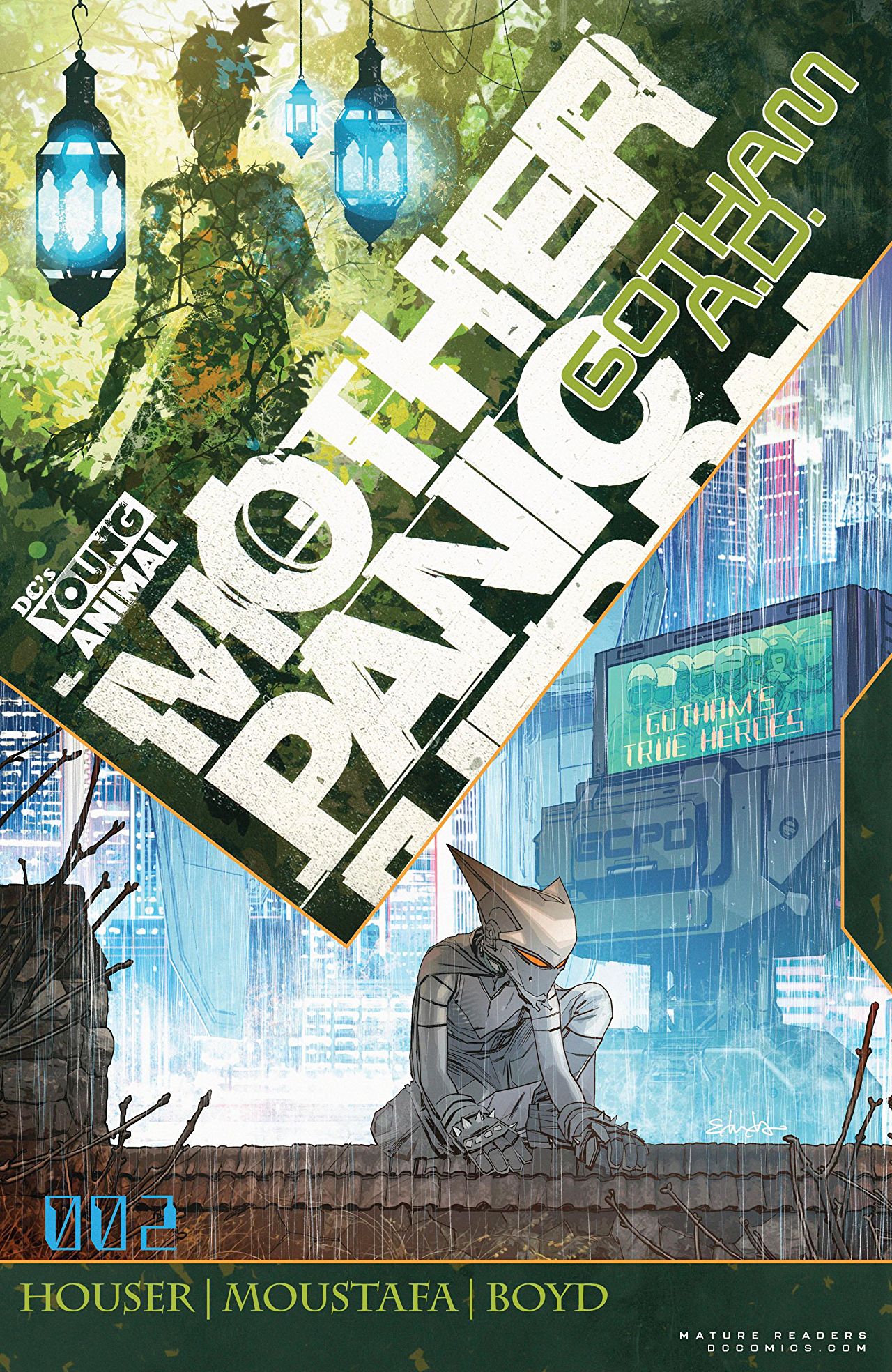 Overview: Violet goes out into the wilds of New Gotham to find her Mother. She follows Joker’s lead to Arkham but she must suit up in her Mother Panic gear to get inside.

Synopsis (spoilers ahead): Robinson Park is a beautiful addition to New Gotham with foliage that beautifies the adjoining parts of the city. Don’t go into it though, there are dangerous survivors of old Gotham lurking in the shadows. In New Gotham, the evil Madame Gala lets what is left of old Gotham have the park.

Violet is in her Mother Panic garb and heads into the park because Joker said her mother is in Arkham and there is a way inside the Asylum through the park. Vines attack her as she progresses through the trees and over the human skulls. She escapes the branches but runs into two large tigers who escort her to a house on a hill. Inside the house is a dark-haired slim woman who says that costumed heroes aren’t welcome. Violet tells her she wants to get into Arkham to rescue her mother. The woman asks the trees what she should do, and then tells Violet that Ivy must like her. She says Violet should go to a particular drainage pipe the next night at midnight. The dark haired woman opens a drawer and removes a cat cowl and goggles. A nearby potted plant extends a vine out to her. Poison Ivy is at hand.

In Arkham, the doctors ask Madame Gala about color schemes for part of the asylum and ask if ‘The Oracle’ has any insight. Gala blows their petty questions off.

The GCPD shoots and kills what looks to be a superpowered baldie. Gala had apparently organized this villain attack as a PR stunt for the entertainment of the people. This also makes citizens feel safe with the GCPD.

The tamed Joker is kidnapped and thrown into the back of a panel van.

The next night, Violet gets ready to leave her home to go to Arkham. Violet has taken in the kid that she saved back in the original title. The girl now calls herself Fennec Fox and wants to tag along. Violet won’t let her come. She asks Otis, who used to be known as Ratcatcher, to keep an eye on her. Though he agrees to look after the girl, he doesn’t attempt to stop her from leaving as the costumed kid heads out into the night. The girl runs into a GCPD officer and says she has lost her parents and needs a ride.

Mother Panic goes to the drainage pipe and waits until a young woman in a Catwoman helmet and goggles (squee) takes her into the pipe. The woman helps her through some locked doors in the underground maze and gives her directions to her mother’s room, number seventeen. Seventeen was ‘coincidentally’ the same  number given to Violet at Gather House.

Doctor Harleen Quinzel sits at her desk in Arkham petting a potted plant. Gala confronts her and tells her that they need to talk. Until next month…

Analysis: Writer Jody Houser continues to build the world of a New Gotham that has surrendered to its old dark nature. Violet, the troubled wealthy socialite, seems to be the only person left in Gotham City that is even marginally on the side of good. All throughout her life she had been protective of her mother at great cost to herself. Here she continues this behavior, it feels real that she would use her powers to try to save her mother.

The connection between who I assume to be Selina Kyle in Robinson Park and Harley Quinn at Arkham is the green goddess Poison Ivy who is a spirit that flows through all greenery. Are the three up to something or just biding their time? Will they help Violet or hinder her?

Interiors are drawn by Ibrahim Moustafa, colored by Jordan Boyd, and John Workman did the letters. One of the strengths of the Mother Panic title has been how the very different styles of the various art teams all still give the same eerie effect. A world that is cursed by the sins and unhappy necessities of its past. Here, Robinson Park has a rich but dangerous look with greens and browns. Mother Panic is often starkly set against the dark background in her white costume. The palette changes from scene to scene all work together to keep the look interesting.

I really like the almost post-Gotham world Jody Houser is building. Gotham feels totally broken. Even the Joker has been driven incompetently crazy by what has happened to the city. It is feeling real and rich to me. I also love the character of Violet. I also really like having what looks to be the Sirens in this story. So, I am going to rate this pretty highly.

Final Thoughts: Mother Panic maneuvers through a very dark Gotham City to try to rescue her mother in Arkham Asylum. She meets potential friends and enemies in a story that feels like it has high stakes. But someone is going to have to do something about that Fennec Fox.