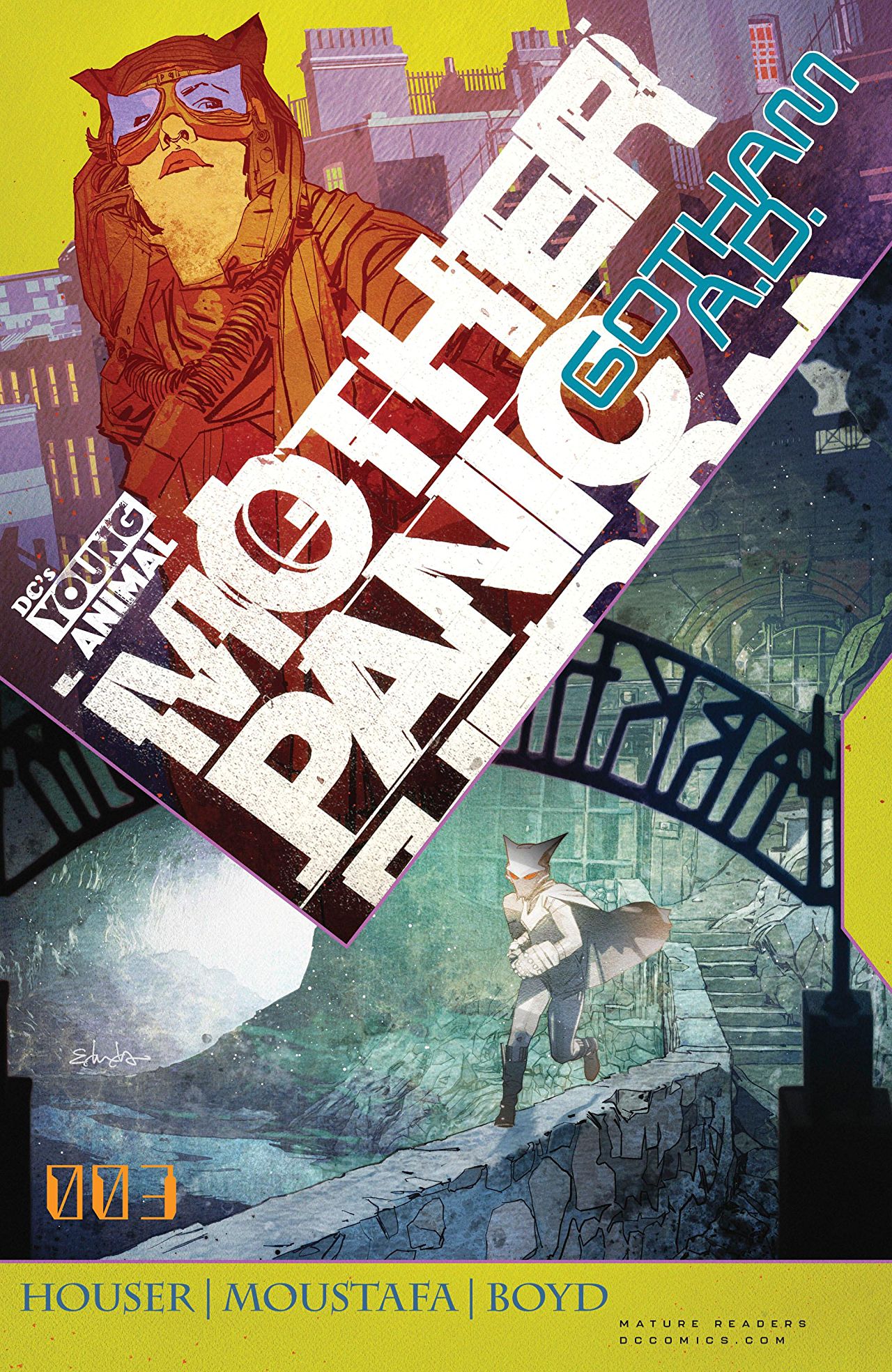 Overview: As Violet Paige continues to navigate a Gotham City shifted through both space and time in the larger sense, she navigates an updated Arkham Institute and its many secrets in the micro, hoping to find and rescue her mother.

Synopsis (spoilers ahead): In the past, Arkham Asylum had become a symbol of all that was wrong with Gotham. Housing its failures and failing to house them, repeated breakouts and continuous reports of malpractice within its walls, the old model had to go. The Collective’s new vision would provide state of the art innovations, holistic treatment approaches, and of course a behind-the-scenes corporate agenda. The Collective’s leader Gala would oversee a rehabilitation program focused on creating dramatic new revenue streams. In other words, where Gather House had left off, the new Arkham Institute could continue with a captive audience ripe for human experimentation on minds that no one would miss as they were warped and molded into a new generation of tools- and weapons- for Gotham’s elite.

Violet, meanwhile, is doing her best to keep her head down, still getting her footing in this version of Gotham City. As the book’s title suggests, everything is ten years later than she remembers and the city is not looking better with age. Using the intel she received from Catwoman’s contact, she’s found access to the updated (improved is probably misleading) Arkham Institute. She’s certain that her mother is being held there. Like everything in this time (and quite possibly different timeline), there is a chance that her mother won’t be the same person she remembers. But there are only so many connections Violet can scramble to keep hold of here and she’s determined to keep her mother’s safety a priority.

Breaking into Arkham through the sewers, Violet first encounters a damaged Dr. Quinzel. She’s been placed into custody by Gala, one of Violet’s old Gather House foes. She’s now in charge of the Collective and Harley’s former boss. But catching her working at cross-purposes with the Collective, Harley is now just another prisoner awaiting modification or experimentation. Gala calls the residents of the Arkham Institute “works of art” but it’s a sadistic form of creativity. Where the old Arkham at least paid lip service to treatment, here the residents can only hope to become foot soldiers in the Collective’s march to power. Violet frees Dr. Quinzel but not before she offers up some intel on where her mother is being held.

Rebecca Paige has been a bit off-center throughout the story of Mother Panic, but here she’s as crazed as every other aspect of this Gotham, merrily greeting Violet with sing-song borderline nonsense that only Violet can decipher. But she does at least recognize her daughter. And also recognize that she doesn’t belong to this reality. Nevertheless, she’s more than ready to leave her captive playpen. As Violet wonders whether her mother’s powers extend to this reality, they are set upon by Gala and her re-branded “works of art” including at least one recognizably bald soldier wearing a running tally of scars. Gala exclaims that “The Oracle” won’t be leaving their facility tonight, confirming Rebecca Paige’s metahuman abilities and giving Violet more than enough reason to engage with extreme prejudice. Violet is in her element here, kicking names and taking asses, as it were, against overwhelming odds. In fact just as it appears there may be more here than Violet can handle on her own, from the skylights crashes Fennec Fox, the other stowaway from Violet’s Gotham, the young girl she rescued during the Milk War incident who, despite constant rebukes from Violet, continues to play her version of a hero. Bloodthirsty and completely willing to break skulls, as long as they’re bad guy skulls, she’s got that going for her.

Fennec Fox arrives on a commandeered GCPD glider that’s a very close match for Mother Panic’s glider in the original timeline. Violet, having already admitted to missing her ride, is all too happy to accept Fox’s help at this moment and the daring rescue looks to be a success (although Fennec Fox would just assume stay behind, noting that “a whole bunch are still alive”) and the strange little team is reunited and heads back to the Pike, their dirty little hideout where Rat Catcher still makes his home.

Meanwhile, we revisit one of Violet’s earlier sources of intel, a down and out Joker. He’s been picked up by members of a crew and awaits an audience with the leader of the group that’s holding him. In a confrontation that is secretly captured on video, several figures approach him and make a show of declaring him old news. Then a young man with a painted face appears to beat him to death. He wears yellow and is joined by a man wearing the jacket and emblem of Red Hood. Could this be Duke Thomas?

Back at Arkham, a young man is shouting at Gala, demanding to know what has become of his mother. It’s Violet’s brother Victor and it’s clear that he is the one who put his mother into captivity with the Collective. Gala assures him that they will retrieve Rebecca Paige and reunite his entire family, and in a stunning final panel we see the Violet Paige of this reality is still part of the Collective’s “Gallery.”

Analysis: If the Gotham City we know and love is a dark place, its been made increasingly clear that this Gotham is far more brutal and twisted. While Violet is still trying to navigate her own confusion as to how she got here and what, if anything, can be done about her displacement in time, it’s also increasingly clear that she’s displaced in reality. Her abrasive nature which has served her well as a defensive stance most of her life may not be enough to get her through daily life in this place. To make it, she may need to revisit the very real darkness in her nature and let the more bloodthirsty aspects of her personality take over. Clearly, that’s serving her charge, Fennec Fox, nicely. The pint-sized terror/hero all but completely saves the day when Violet and her mother are about to be overrun inside Arkham.

If there was any question about how cold and violent this place is we are witness to a completely bloodthirsty murder of the Joker in a macabre revisiting of the circumstances involving the death of Jason Todd. The unidentified figure who may or may not be Duke Thomas beats him to death, on camera no less, with a crowbar. As the scene draws to a close, Jason Todd himself appears declaring that those who wish to build on Gotham’s ashes will themselves burn.

The continued visiting of familiar Gotham residents with their personalities pushed to the limit makes this story chilling and exciting at the same time. If Violet had gotten used to living on a dark edge of reality in the original Gotham, here she’s finding that her darkness is pretty mundane. To survive in this place, she’ll need to find a new edge.

Houser’s trippy take on Gotham is still intriguing, but there’s so much weight to the environment that the actual narrative is sometimes slowed by it. Ibrahim Moustafa’s art though continues to deliver and each time we meet we are introduced to Gothamite we’ve known in the other reality it continues to be an unnerving surprise.

Final Thoughts: Like the name of the story implies, this very different look at Gotham is captivating in its own right. The added drama surrounding Violet Paige’s family promises an epic as long as these creators haven’t bitten off more than they can chew.