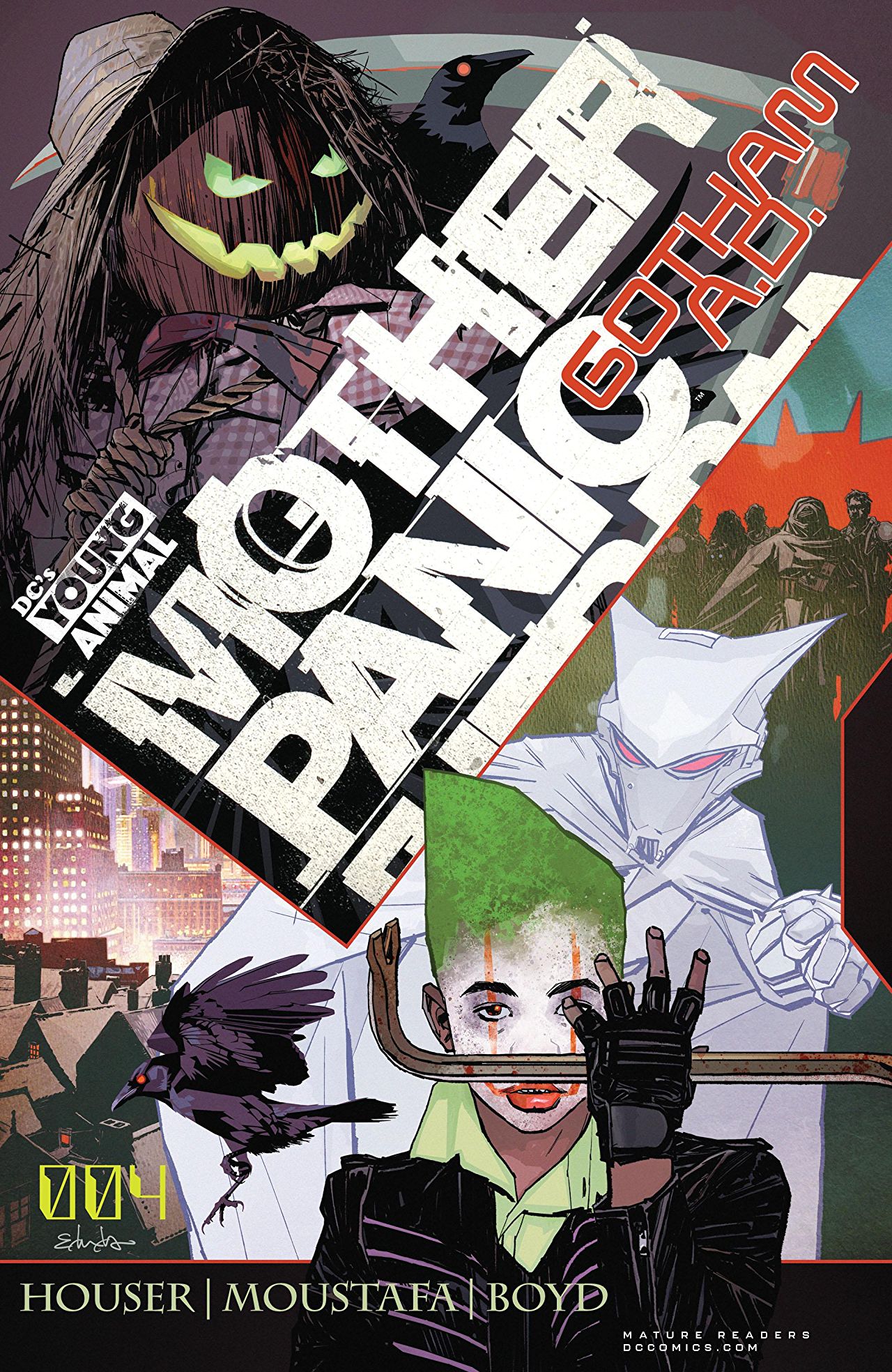 Overview: Violet, a bit full from a generous helping of cake, begins to fathom the meaning behind that old phrase about having it and eating it. The depths of Gotham AD’s depravity continue to be boundless as proven by its inhabitants. Fennec Fox wonders why, if she’s gonna be doing all the saving, she keeps getting referred to as “Sidekick?”

Synopsis (spoilers ahead): Mother Panic, aka Violet Paige, decides to take the bull by the horns and steps out of the shadows in Gotham AD. The unease and general sense of instability and insecurity about the future seems to have become a thing of the past. It’s as if she woke up one of those mornings in a world ten years aged from the one she remembers, that appears for all the world to be her world even though she knows it isn’t and just decided that this is where she belongs. Strangely enough, in this world, that decision gives her an eerily “Bruce-Waynian” quality or shadow, as coming out to the people and the press of Gotham means stepping into the publishing fortune left behind by the Paige family. More or less she is hailed as a returned crown princess, though she is required to pass a battery of tests in order to prove to the public she is who she claims to be. This provides her ample opportunity to play Girl-About-Town and provides a suitable pretext for ducking away from the gossip column-related flashbulbs and limelight. It’s also an excuse to avoid the many questions bouncing around her own head that she still can’t answer about how she got here and what to do next.

Gala and her Collective, perturbed by this development, find it all to be a bit too coincidental; the arrival of “The White Witch” and the subsequent loss of their “Oracle” (Violet’s mother) seem too definitively “bad news” not to be berries from the same rotten vine. Not to mention the fact that, unbeknownst to Gotham’s general public, Violet Paige has been there all along, held in cryosleep captivity as a prisoner of The Collective! Interrogating Victor Paige, Violet’s maligned brother with delusions of grandeur, provides Gala with little concrete advancement. Beyond being sure that without the benefit of being the primary heir to his family’s fortune, his pedigree is about as valuable as everything else he has to offer, the experience is more or less of the same value as his intellect.

Meanwhile, Jason Todd likens the appearance of the White Witch as to the arrival of a false prophet. His disciples at first believing that she might represent the returned Savior long promised to Gotham are soon corrected. We are treated to the next element of Todd’s plan to prove why Gotham must have a Bat as Jason brings Doctor Crane into his shadowy fold. Making it clear that Crane will only last as long as his usefulness, Scarecrow and this new and terrifying Joker avatar are put into play.

Rosie- Fennec Fox- has remained in hiding with Violet’s Mother. But she has only as much experience with the chaotic strands of prophecy produced by Mrs. Paige as there was time for before the entire group was transported to this strangely more-aged Gotham. She hasn’t had time to learn how to process the information she gets from Violet’s mother. So when she tells Rosie she hears “screams to come,” that has yet to be uttered, Fennec Fox springs into action. Unfortunately, her “Sidekick,” Mother Panic, is about half in the bag at half-past eleven. In the AM. Fennec Fox thinks maybe she should drive. Violet disagrees.

Although we all know friends don’t let friends drink and glide, Mother Panic and Fennec Fox take to the skies. Violet may be intoxicated, but she knows the eerie strands of providence that pass for her mother’s daily musings. And “screams that are coming” is code for All Hands On Deck. Sure enough, a gas cloud in the park is already obscuring the handiwork of Doctor Crane and the New Joker.

Disturbingly ready to fight, Fennec Fox is off the glider, knives at the ready before Violet can back her off the New Joker figure. It’s clear there has already been bloodshed but Violet clings to the conceit that she needs to protect Rosie from as much violence as possible, regardless of how much she has been subject to already. She points Rosie in the direction of Scarecrow and directs her to put a stop to whatever malfeasance he is in the act of committing and focuses her own efforts on tending to this Joker. But what’s clear from the get-go is that, much like Rosie, he too, is a kid and he’s already seen far too much gore. She approaches the situation with the same gloves that would be suggested by his age. Unfortunately, she soon realizes that his bloodlust is fully matured. Her super-strength is a factor she planned to use sparingly but that allows the Neo-Joker to gain an advantage. Just as trouble seems guaranteed, Fennec Fox comes in with a save…. a particularly brutal one. She appears to slice both his Achilles’ tendons. While she essentially ends the fight with that maneuver, it sets off alarms even for Violet, no stranger to violence herself. Reminding Rosie that the point is never to hurt kids, no matter how far gone they might appear they restrain the Joker for the GCPD. Violet leaves an artistic calling card at the scene for GCPD and the “Dynamic Duo” disappears into the Gotham Twilight. Doctor Crane, overcome by Fennec Fox early on, affects his escape.

But his reprieve is short-lived. Returning to Lord Robin’s hideout, he relates the events of the afternoon to Jason. Nothing if not reliable, Jason is immediately reminded how much he disliked Crane from the start, and of the warning he leveled at him from same; that in another time and place (maybe the Gotham we all know and love?) he would take Crane out himself. Crane, proving no longer useful, makes that decision an easy one for Jason and he relieves Scarecrow of his brainy bits scattering them across the floor.

There is a short backup story as usual, and though they typically seem to reiterate moments already traversed in the issue, here we are reminded to take a closer look at something very particular. Through the use of a fairytale metaphor, we see Violet and her mother separated by a chain that comes to drag Violet away. Then, a thorny plant with Gala’s face enshrouds Mrs. Paige… who is quickly freed by a costumed Mother Panic. But still, a princess slumbers… As far as how it relates to the primary story, there is a so far little-discussed issue: Whatever happens next with Violet and Rosie, there is already a Violet Paige occupying this Gotham who still slumbers in the bowels of the Collective facility at Arkham. Before when Violet was still hiding this might have been less of an issue, but now Violet has inhabited her place in society. When the Violet of this world wakes up, there’s likely to be serious trouble!

Analysis: There’s a seismic shift in the dynamic this issue and its awesome fun. Thus far in the “Gotham AD” era of Mother Panic, Violet has been on the run, on the defensive, understandably confused and unequivocally desperate. Even breaking into Arkham to rescue her mother she can’t help but appear dazed and confused every moment of her journey, unsure what to expect much less how to handle it. All that changes as we open on the “Fabulous Life of Violet Paige” sequence, dealing with press, photographers, interviews and club nightlife. As far as we can see she’s really taking charge.

Underneath this façade is a different story. She’s still scared and confused, she’s just taking a new tack to deal with it. It’s an old story and it almost always ends the same way. When you try and smother pain with booze, boys, babes, and toys, the results are generally cataclysmic. Almost immediately we are treated to a vantage point from Jason Todd’s hideout and we can see that while Violet is cruising, these guys are plotting. While there may be a lull in the action, life is going to get significantly tougher real soon.

Likewise back at the Collective. Gala is none-too-pleased with the developments of a “second Violet” and she’s likely to make it her business to remove this new one, whether her apparent connection to the White Witch proves factual or not. Since we know it’s more than cursory connective tissue, we can be sure that this will become a serious problem soon.

On different terrain, Rosie is left to her own devices with Mrs. Paige. And while her immediate instincts have thus far been to bring intel to Violet, the future we can see for Fennec Fox is so clear it’s almost as if they’ve already drawn the panels: Violence begets more of the same. And if she isn’t handled with a very special kind of respect, the self-reliance and independence she already displays may blossom into something more sinister.

The picture that comes into focus by the end of the issue is not of a Violet free of her past conflictions and confusion released on the party scene of Gotham AD, it’s one of urgent need for redoubled efforts towards solving the immediate problems of both the group’s position (in both time and space) and the more mercurial issues surrounding the group’s disposition. For both Violets, for Rosie, and of course for Violet’s Mother, who continues prophesizing doom with no clear indications as to why or where for her insights originate. On the whole, the team is in a bad, bad way.

Nevertheless, the action picked up in a linear way this issue and it’s a welcome piece of storytelling. The fact that the true state of affairs requires the full picture provided only after finishing the book only makes it that much more enjoyable. What else needs to be said about Jody Houser and Ibrahim Moustafa’s storytelling chops? The scope and scale of this truly original yarn is a feat in and of itself. That they’ve built it on a set of people, places and things we already know so well while casting them in a unique new light is perhaps the greater achievement. Indeed, this issue only continues to introduce players of the Gotham we are already familiar with. As Jason Todd emerges as a real player in this story, perhaps the actual big bad behind the posturing of the Neo Joker, we also get to pay respects to Scarecrow in a perfectly creepy cameo. Victor Fries even gets a second nod as the doctor maintaining the cryosleep facility for the Violet Paige of Gotham AD.

Final Thoughts: If the last issue was a bit muddy and seemed to lose the main threads for a second, this issue of Mother Panic: Gotham AD has totally doubled down on the cyber-noir, neo-gothtopic nature of the entire premise. If you came here looking for Batman, back up two reviews and take a left at the Wedding Special. But before you go, take the time to enjoy a really fun ride through a Gotham neighborhood you never knew you’ve always wanted to visit!