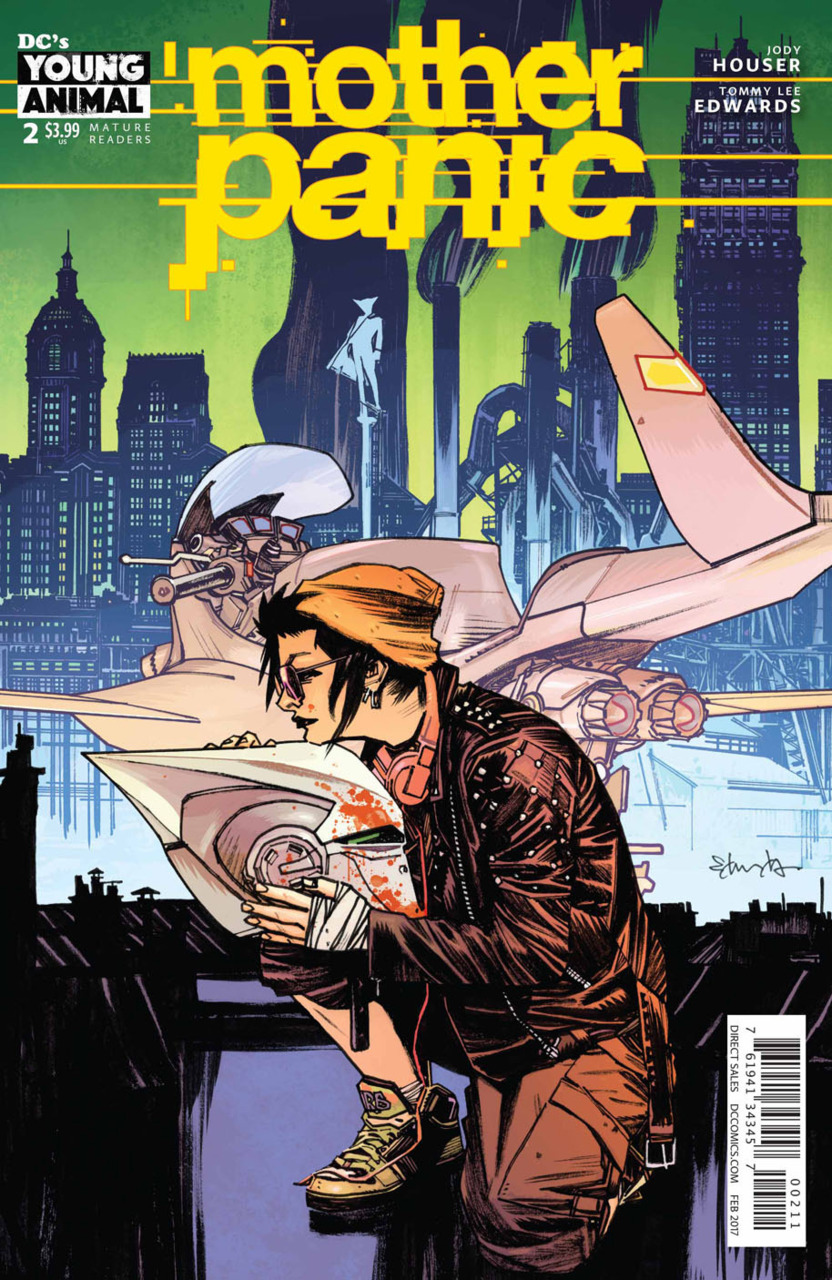 Violet continues her quest to make Hemsley pay for his sins. En route she tries to track down a child exploitation ring in Mother Panic #2.

Violet heads to what appears to be Gala’s art studio/torture room where she expects to find the children being exploited by Gala and her gang. It is empty.

She remembers back to her childhood overhearing her father make a deal with a man for one hour alone with ‘her’. When her father objects he presses him and says that no one would believe her anyway. Her father accepts the offer.

In the present day, Violet heads to a party for Gotham’s Victim’s Fund. She overhears Hemsley saying that a special car would be delivered to his garage the next morning. Violet now knows where he will be and when. She decides to distract herself in the mean time and meets a man at the party and they go to his home together.

Back at Violet’s house, Dominic has escaped from his cuffs and wanders around Violet’s maze like home. He follows a voice and finds Violet’s Mother in the overgrown garden. They have tea and sandwiches and talk.

Violet wakes up in the man from the party’s bed and scrawls sad faces on the wall with her blood to ensure he won’t try to contact her again. She gets in her Mother Panic suit and heads to Hemsley’s garage. She finds him in the garage in a fancy car. Violet throws a tire iron through the windshield and attacks Hemsley and asks him where the children are. He gives her the address and she intends to kill him. She is unable to kill however and the inability upsets her. As she leaves she destroys all of the expensive and exotic cars in his garage.

Violet again remembers back to her childhood. She confronted her father with a rifle over his deal with the man. Violet’s father says that he is doing this to build her future and that he could never hurt her. He wasn’t making a deal for Violet but for her mother. Violet shoots him anyway. Until Next Month…

This is not your typical comic book. Writer Jody Houser takes on themes of child abuse and complex parental relationships in a way that isn’t typical for DC Comics. It is adult and ambitious. It doesn’t succeed in every aspect however.

The best part of the book is the character of Violet. She is clearly damaged with an enormous chip on her shoulder that everyone can see. She engages in casual sex, casual repulsion, and casual violence to achieve her ends. She has a complex but obviously loving relationship with her mother and had a very tragic relationship with her apparently loathsome father.

The art by Tommy Lee Edwards is scratchy and inconsistent. It isn’t always easy to tell the characters apart and their look can change from panel to panel. Hemsley in particular is hard to identify consistently. However, when the art does work it glows. Some of the panels showing closeups of Violet look terrific. Also, the page of Violet as a girl shooting her father is very powerful.

This book holds a lot of promise. The character of Violet is vivid and somehow likable. However, the topic and tone of the book are a little dark for my taste. Another issue I have with the art is that the flashback scenes aren’t well defined. Sometimes I was well into a scene before I even thought to question when and where it was happening. There are clues, but they are subtle which can make for a confusing read. Last issue I gave the book a decent rating, but this time around I am going to be a little more critical about the problems. Don’t think that I am dismissing it however, while it is a challenging read it also has tremendous potential and I for one will be sticking with it.