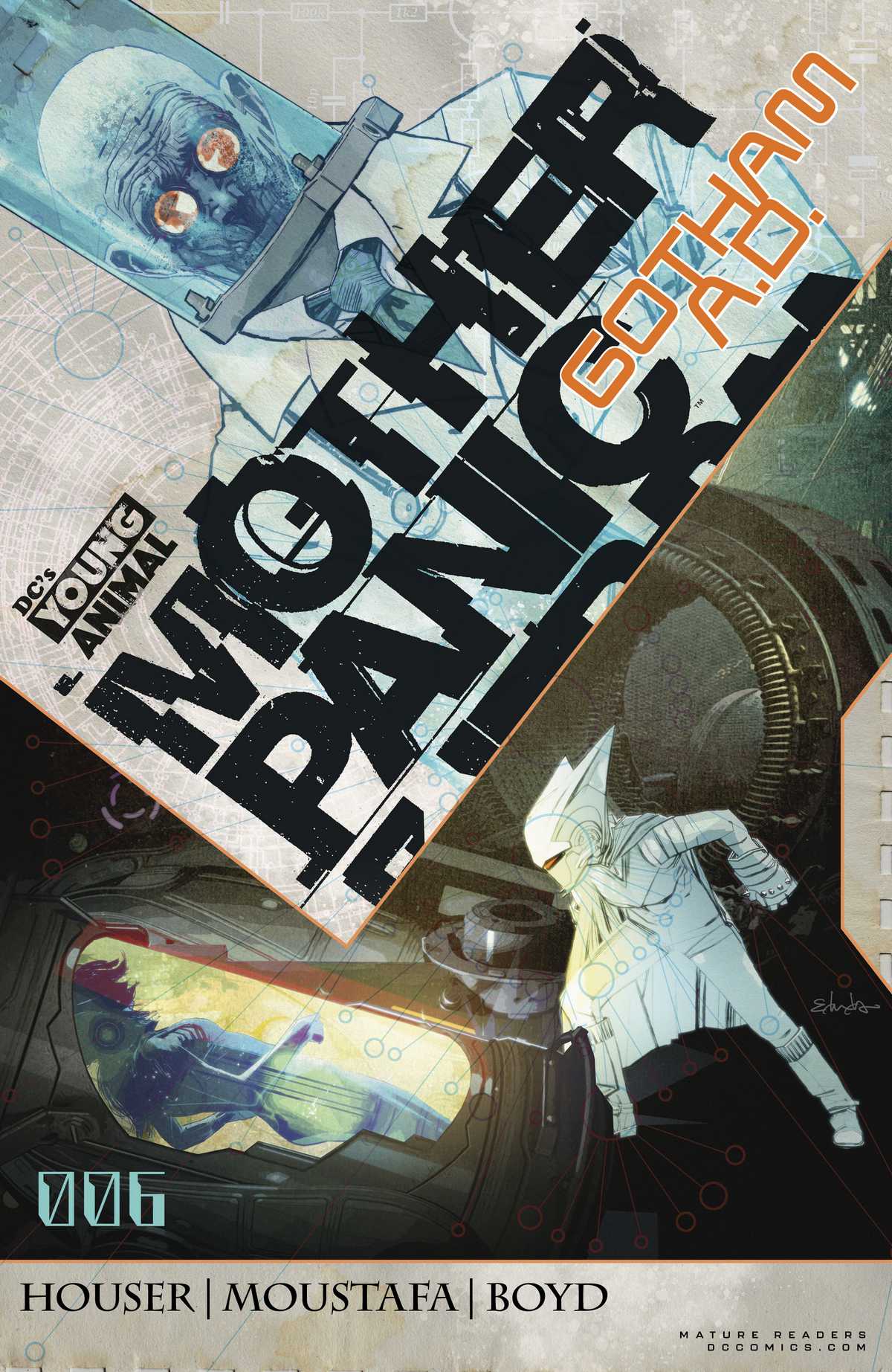 Synopsis (spoilers ahead): From the moment Violet arrived in this twisted future with Fennec Fox in tow, there have been dark forces pressing down on her. Sometimes metaphorically, but just as often actual organizations which should only exist in the shadows, made cock-sure in a future Gotham long since abandoned by Batman have done their best to suppress her efforts to carve out a home for herself. Now those dark forces have found their way to her doorstep in the form of Lord Robin, leader of a group of fanatics who believe their brand of justice is the one and true. It’s become clear that while the Collective may not have her best interests in mind, it is this Cult of the Bat, led by a Jason Todd who’s mind never recovered from the disappearance of Batman, has been with her every step of the way since Milk Wars.

But Gather House, the institution that stole her childhood and made her into a living weapon, they’ve been with her every step as well. This doesn’t bode so well for Jason at the moment, as old training takes over and she becomes the weapon that they made. In a battle that pits an obliterated mind once trained by The Bat against her own broken past with training equal or better to his, it’s the lucidity that will win out. And Violet is nothing if not lucid. Still screaming about how he was “trained by the Bat himself,” Violet counters simply, “SO? It doesn’t make you any less of an A**HOLE!”

Fennec Fox joins the fray, Violet’s young charge and a refugee from Milk Wars. Despite Violet’s continued demands that she not have anything to do with this battle, she jumps in and ever so delightfully shouts, “Eat all the KNIVES!” before plunging two blades into Lord Robin’s shoulder blade. She’s nothing if not scrappy, but this assault forces Lord Robin to give her his attention. Like the child she is, he tosses her like dirty laundry against an adjacent wall where she crashes. Loudly. Violet makes a beeline for her and while she appears to just be dazed, muttering something about vengeance, the kid stuff abruptly comes to an end. Violet sees her own fragility and mortality reflected in the kid’s eyes. She now turns to Lord Robin with a smoldering hatred that wasn’t there before. The two seethingly violent forms clash and batter each other, each one trying to break spirit and will of the other… as well as bones. Jason’s mask cracks in half revealing a snarling visage that only pauses when a figure whispers quietly, “Oh Jason, my dear, don’t say such awful things about yourself,” turning his hateful words back inwards. It’s Violet’s mother and her clairvoyance and generally heightened empathic abilities stop Jason almost in mid-swing. “Bruce wanted so much more for you,” she whispers, and with that, any fight that was left in him disappears. Jason embraces Mrs. Paige, falling to his knees. Whatever remainder of the Cult of the Bat might be infecting the city, Mrs. Paige’s influence has set Lord Robin back on a righteous path. Violet checks on her little Fox friend who is, of course, just fine. Then knowing she’ll need to learn to trust the mother that isn’t really hers, she leaves to try and tie up loose ends.

She takes the glider to the rooftop of Collective Industries and makes her way inside. She sees her brother working in a lab and calibrating equipment in order to keep a project up and running. That project, it turns out, is Violet Paige in stasis. She enters the room and comes face to face with her other self. The feeling is palpable. She want’s to cry out that this thing in front of her doesn’t belong here. But deep inside she knows that really she’s the one who doesn’t belong, who is intruding. As if on cue there is a voice behind her, “You don’t belong here.”

“No idea how f***ing right you are,” she responds, removing her helmet. We see that the other speaker is Victor Fries. And we discover that somehow in this place Violet was put into the same stasis program that likely kept Nora Fries preserved for many years. But Mr. Freeze freely admits that Violet’s brother Victor never intended for this experiment to be played out to fruition. Instead, there was simply too much excellent data to let the experiment go to waste. But now, Freeze sees that with Violet here, it is simply inhumane to keep this other version of her frozen in time. Violet asks why he doesn’t help her, and Freeze responds that it’s not his decision to make.

With that, Violet releases the cryo-sleep device, freeing her unconscious other self. She can’t be revived in this state, and Violet kisses her goodbye, knowing she deserved better.

Her brother is beside himself. “What have you done?” he screams, waving a firearm. He fires and hits one of the lab assistants. This is the man- no, the thing, that started her on this path. He was the one who gave her up to Gather House in the beginning so they could reform her into a killing machine. She grabs him in a classic Vader-throat-hold. This is what she’s been working for, waiting for. But moments are flashing before her now; some of them are bad, very bad as she remembers killing her own father. But there are good things now too as she thinks about her new sidekick, resting at home after the battle with Lord Robin. And even though it should be easy and it should fill her with a sense of victory, she knows that taking back her life and her reality means giving back some of the ferocity. She can’t dispatch him and knows that it won’t ever be easy again.

The lab assistants are worried about The Collective punishing them. Violet takes them with her. They both worked for her in the original timeline anyway.

Back at their base, Violet confronts her mother- but she already knows. Her Violet, the one from this timeline is now gone. But in truth she’d been gone for years, frozen in time and space. And now these two can get to the business of growing a life together. And not just two. With the lab workers, Fennec Fox and Rat Catcher in the basement, there is all the makings of a real team here. If nothing else, Violet stands ready to call this reality her home. She’s never thought of herself as a hero, but in this town, that word has never meant what it means to everyone else anyway.

Her last words, as she heads out to patrol the night skies of Gotham AD: “We’ll do this my way. Fast, loud and hard. And it’s gonna f***ing hurt.”

Analysis: This one is, as they say, for all the marbles. As the last issue of the series as both the title and the Young Animal imprint come to an end this month, there’s an urgency to this issue that I can’t help but wish I had felt a few issues earlier. The number of things that get handled in this issue would take four issues at another point in the series. And while there’s a sense of pacing required in a noir-esque book like Mother Panic, I can’t help but wonder if the story had moved just a bit faster, would we be saying farewell to Violet and company here?

But since these are the facts on the ground, it is a pretty satisfying conclusion to many of the threads that have been opened since Violet arrived in Gotham AD. In a micro sense. We got a showdown with Lord Robin, we saw her brother and her other self taken care of. The Collective was put in its place and Violet settles into her home in the future. In the macro sense- as in why the heck are they when they are- there wasn’t much to go on.

But we aren’t left with something that feels hopelessly incomplete or inconclusive. In fact, Houser does a good turn to leave Mother Panic in a place that another creator, if they so choose, could come in and jump off in a bold new direction (or a comfortable, similar one for that matter) without much baggage.

Does it feel like a wrap-up? Of course, it does. Mother Panic is a Gotham-based hero who doesn’t like or more importantly interact, with Batman. It was a tough row to hoe. But there were some really great moments along the way. While the specifics of Young Animal’s closure are certainly worth telling, the end of Mother Panic leaves an empty spot in my pull list that not many books could fill.

Final Thoughts: Mother Panic, along with the rest of the Young Animal imprint was planned with a beginning and an end in mind but saying goodbye is still bittersweet. To say the book and its characters were quirky would be an understatement, but Jody Houser and Ibrahim Moustafa worked really hard to get inside the minds of those characters and to show us a part of Gotham that we had never seen. As send-offs go, Violet Paige got one that was better than most. But I can’t help but hope (and maybe even believe) that there are big plans for Mother Panic coming down the pipe. Violet deserves another shot at the big leagues. One thing is for certain, there will always be room for a vigilante with an edge in Gotham.