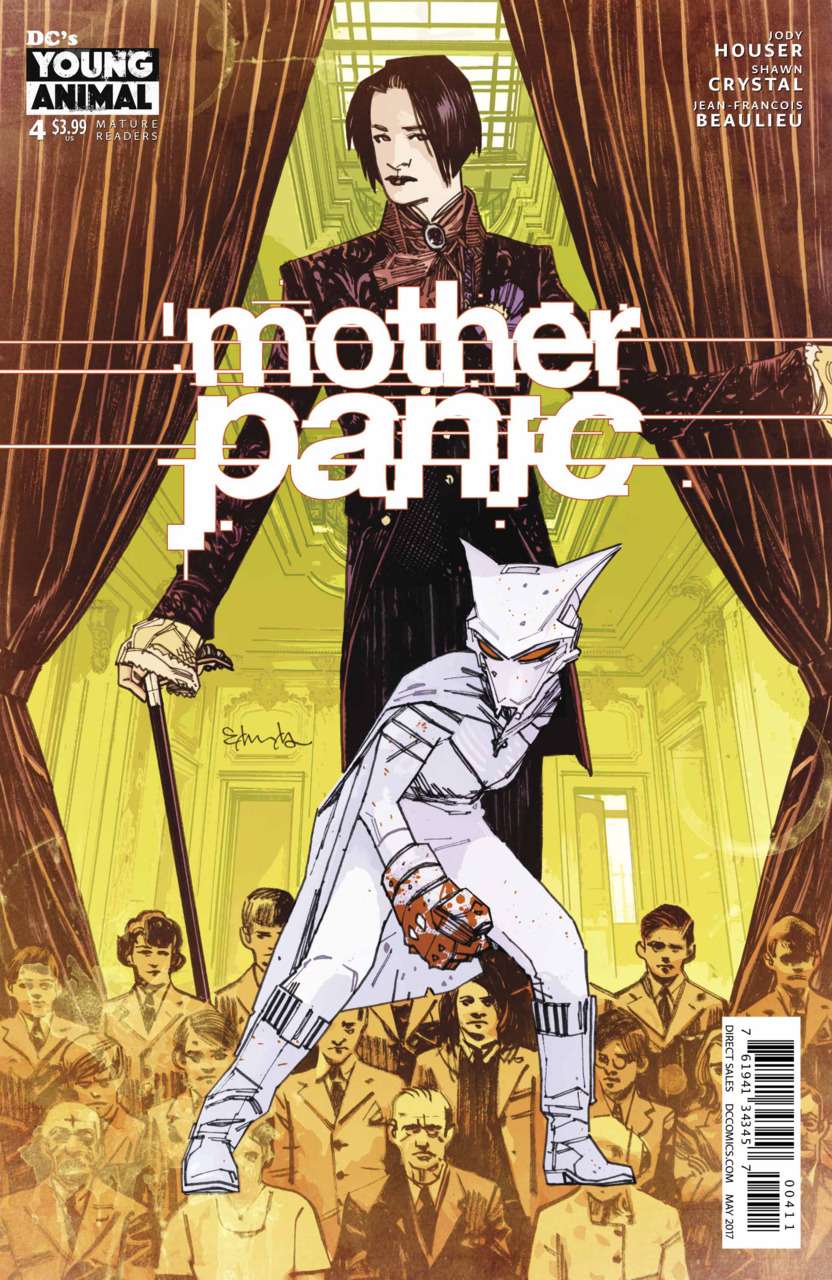 Violet continues her quest for vengeance against the demons of her past and encounters another on the same path in Mother Panic #4.

The Gotham Museum of Science and Technology is opening the Rosemary Layton Memorial Wing. While the ceremony is going on and a speech is in progress, a mysterious figure with a skull headed cane pulls the fire alarm and the building is evacuated. The figure moves to the roped off new wing when interrupted by an employee. The employee gets a look at the figure, is frightened and runs off. A bomb goes off and destroys the Museum and the figure quietly walks away from the chaos.

Violet Page is on a Gotham late night talk show. She is rude to her interviewer and says outrageous things calling Batman a bully for beating up the mentally ill villains he arrests. She leaves the show to a mix of applause and boos. Afterwards, she reflects that she is cultivating her reputation as a jerk. As she goes to leave the studio she hears the voice of the next guest, Ashley Layton, the man who gave the speech at the Museum opening. She recognizes the man as the one who convinced her brother to send her to the boarding school Gather House after the death of her Father.

Gather House was a place of pain and agony for Violet. She decides to do something about Mr. Layton. Later that night Violet is on her aero-Vespa flying around Gotham in her Mother Panic outfit. She breaks into LayTech Software, hears some noises and investigates. She recalls the nightmare that she experienced at Gather House. It was a place of terror and sinister medical procedures. It was also where she learned to fight. She finds the source of the noise, it is the mysterious figure from the Museum destroying computer equipment. Violet recognizes the figure and calls out their name -“Petty”. The figure corrects her with “Pretty”.

The figure has a face that looks more like a mask. Mother Panic battles the figure and take their gun away. Pretty is someone that also boarded at Gather House and is taking revenge on Layton. Violet realizes that they share the same pain and the two hug in recognition. As the two fly off the LayTech building explodes behind them.

Meanwhile an overweight and disheveled man, Flannegan is being evicted from an apartment building. He is told to take his ‘vermin’ with him. Flannegan is followed by a parade of large rats that are capable of frightening passersby. Flannegan leads his long tailed buddies to the basement of a nearby building where they will hide out. Until next month…

Writer Jody Houser entitles this issue “Broken Things Part 1”. This is a bit confusing because it wasn’t entirely clear that the previous three issue story arc had fully wrapped up. Gala is still on the loose, though Violet did save the group of children. So, moving on…

This issue’s story continues Violet’s attempts to quell the demons of her troubled past. There are some fine touches as Violet plays the controversial socialite on the interview show. She truly doesn’t care what people think of her, she has her own mission and is every bit the actor as Bruce Wayne. Houser is creating a character in Violet that has many parallels to Bruce. Both are wealthy, have powerful childhood trauma that drive them, and resist killing their enemies. Violet’s character is only four issues old but is very specific and clearly written.

The art in this issue is by Shawn Crystal with colors by Jean-Francious Beaulieu. The team’s work is very different from last issues wonderful art by Tommy Lee Edwards. However, this issue’s art is also appealing. There is an old fashioned comic book quality to it. The characters are simply drawn though still recognizable from panel to panel. Sound effects and emotions also are on visual display. Alarms ‘wuuuh’, explosions ‘Boom’, and anger shimmers. There is an abstract quality that works very well. The one drawback to the series as a whole is that Violet’s face hasn’t been consistently portrayed issue to issue. This is a problem with comic book characters in general. Four issues in, it would be easier to connect with Violet if she had a consistent visage.

I am enjoying Mother Panic much more than my rating might suggest. I am utterly fascinated by the character of Violet Page and already am looking forward to the next issue. The reason that I am still not rating this book higher has more to do with the clumsy change in story and art from the previous issues. I didn’t realize the last story had concluded and expected the hunt for Gala to continue. Because of this I felt like I was starting over this issue and was pretty confused during my first read through. I am glad that I stuck with it and reread the story a few times to figure out what was happening. I was also a little confused by the character of Pretty. It looks as though Violet knew ‘Petty’ from Gather House, but Pretty self-renamed. The character’s face looks female and has a feminine sounding name, but people call Pretty ‘sir’. I’m not sure if this is a trans character or if this is purely a plastic surgery mishap or something else entirely. In any event, I am not sure what is going on but I really am interested in finding out. Even with these couple of problems I heartily recommend Mother Panic.