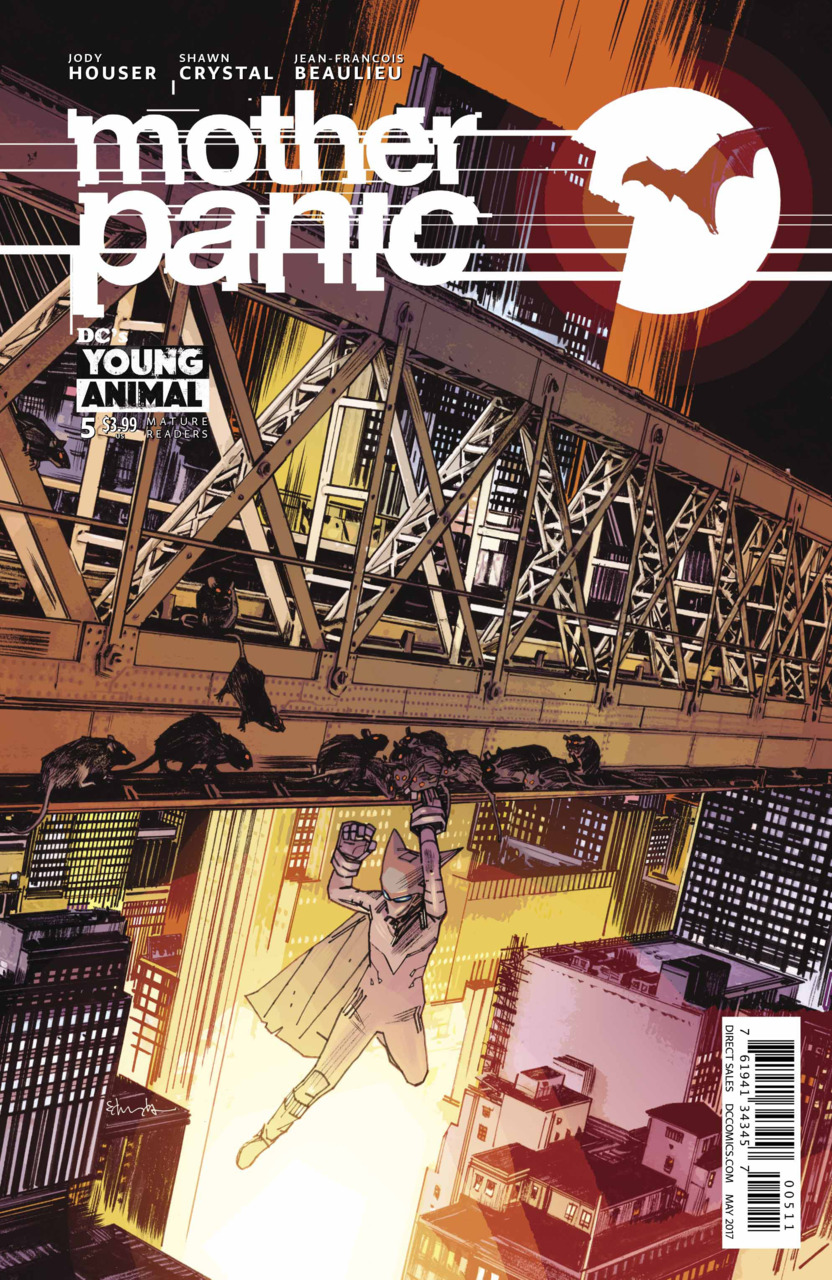 The Story (spoilers): In the last issue we met Pretty, whose name was originally Petty before his run in with the Gather House medical staff. As a child, Petty went to school at Gather House with Violet. Each child was medically augmented based on their predisposition. They attempted to make Petty beautiful, but they went too far. Now Pretty’s face is so unnaturally symmetrical as to be horrifying to look at.

Pretty wants revenge on Ashely Layton, the recruiter for Gather House. This seems like a decent idea to Violet.

Violet is at home getting a check up by her on-staff Doctors. They are working on healing her from what they call her rounds of ‘mutilations’. Violet visits her Mother’s room where Mom is having a conversation with some apparently imaginary friends. Violet patronizes her Alzheimer-ridden Mother which upsets the older woman. Her mood quickly turns into a protective and caring matriarch who just wants the best for her daughter. When Violet leaves the room a group of rats return, it was they who Violet’s Mother was talking to.

The next night, Mother Panic and Pretty are on the roof of a building ready to cause another injury to Ashley Layton. They are staked out across from one of his buildings but it is very heavily guarded. They decide that it is too risky to attack and decide to give it a rest for the night. They decide to meet the next night on the roof of the Hahn Building. Pretty asks Violet out for a drink but she refuses.

Instead, Violet gets dressed into party clothes and goes out for a night on the town. She ends up smooching with a pretty lady she meets but can’t forget about the torture she endured at Gather House. Mother Patrick, the head of Gather House, decided that Violet showed aptitude for combat. Violet was altered to that end. She endured operations by one, Dr. Varma who added some sort of implants to Violet’s body.

The next night Mother Panic meets Pretty on the rooftop of the Hahn Building. Pretty has a sniper rifle with a silencer. It reminds Violet of when she shot her Father. Pretty wants Violet to shoot and kill Ashley Layton’s sleeping son through his bedroom window. Violet angrily refuses and destroys the rifle so Pretty can’t carry out the crime either. Violet will not kill, especially children. Attacking children is the modus operandi of Gather House and she will not continue the violence.

Back at home Violet is having cake with her Mother. After they talk and Violet goes to bed, her Mother goes down to the basement with a piece of cake. There she finds Flanegen and his pack of rats and offers the surprised cellar dwellers dessert.

The Breakdown: Writer Jody Houser continues to do the careful, slow reveal of Violet’s troubled childhood. The interaction between Violet and Pretty makes the exposition seem organic, there are hints and allusions to the horrors she endured with some facts sprinkled in. This approach is working and provides a richness to the story even though we have only seen Violet for five issues. The idea of having a man who has been made so beautiful as to make him hideous is a fantastic concept. Pretty’s desire to be wanted coupled with his desire for revenge adds complexity to his actions. All in all it is a very successful approach.

Artist Shawn Crystal and colorist Jean-Francios Beaulieu have created an unusual look for this issue as they did in the one before. The approach looks cartoony at first glance, with simple lines and exaggerated features and body lines. However, there is also an abstract almost dream-like quality that exists behind the simplicity. The colors also give a reserved and earthy feeling. However, there is a varied palette, with one scene full of sage hues, and the next with violets. Some pages are totally abstract with nightmare quality images jumbled across the page. However, the display contributes to the storytelling in a clear fashion.

My Take: I have enjoyed this and all the previous issues of this book but have held back on giving a high rating so I could see how things progressed. At this point the book has sustained five issues of strong plot and character development with two different, successful artistic approaches along with two different story lines. I am ready to crank things up a little as the team has earned some trust. I recommend that mature readers pick up this title, as I would be reading it even if I weren’t reviewing it.