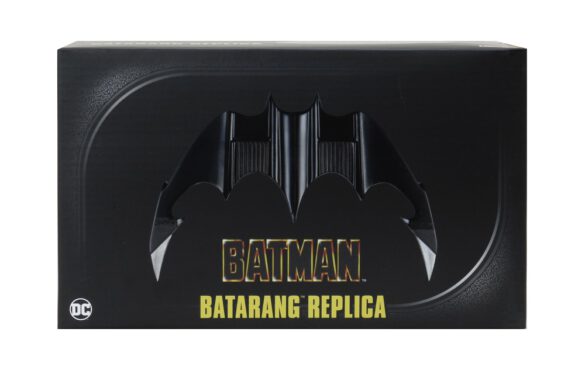 NECA has released details for their latest 1:1 scale prop replica which features the Batarang from Batman (1989). The plastic Batarang folds in three different places and has magnets embedded to keep it from opening. It also comes with a display stand. It is priced at around $15 and will be exclusive to Walmart. It is expected to ship to stores this month. There is no official listing on Walmart’s website except for a third-party seller, but you should be able to find it in stores. UPDATE 03/04/21: As it turns out, Walmart had exclusive selling rights for a certain time frame. Now the item is appearing to be able to be preordered at Entertainment Earth for $17.

“Where does he get those wonderful toys?” Introducing NECA’s first release from their DC Prop Replica line, the Batarang from the 1989 film, Batman. Own one of the Dark Knight’s most iconic tools in serving justice across Gotham City. The Batarang measures 13″ long with articulated hinges and magnets, allowing it to open and close. Also included is a display base for exhibiting in your own personal Bat Cave. Batman (1989 film) – Prop Replica – Batarang