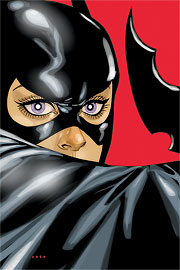 So we continue "The Month Bat-Fans Go Broke." Last week there was a mess-up and Killing Joke was delayed last minute. It was even on the DC site as it was going to be released last week only to be changed to this week a couple of days late. So I won’t go into that comic, but it is coming out today. What else is there? Let’s see.

The third issue makes it way into our comic pulls this week. Or does it? The first two issues were ok. They were nothing special and didn’t really give it the push that this series needed to come out. DC was going against so many fans hyped that Barbara was going to Batgirl that this series really needs to pick up the pace. We have not received very many answers since they revealed who Batgirl was. There have only been more questions conceived. This issue needs to have a little more action or a little more downtime, but not both. There seems to be too much being crammed in the issues and we are not getting enough of either. Make it all about one aspect and leave the other area for a small bit instead of spreading it thin. This week I unfortunately have to drop this one down to READ IT.

This series is double shipping this month. It as almost as if DC wants us to forget the catastrophe that we have been reading in this book. It is really the only series that does not fit with the rest. And when I say that, I am including Detective Comics, which has nothing to do with Batman other than the namesake. I will admit that I am interested in Dick and Two-Face fighting. I am also interested in many other things. Some would include: When did Two-Face become a better fighter than Dick? Where is Oracle during this whole time frame while they are in the Batcave? What the heck is going on? This one, I am sure you guessed it, PASS

This is one of the few TPB’s that I will ever suggest you pick up. The chronicles collect the first issues ever of Batman in Detective Comics, Batman, and World’s Finest. I am not going to go into detail with this one, but it is worth it. BUY IT

Not to be outdone by it’s sister series, Detective Comics releases its own annual this week. Detective Comics has not had a annual in over ten years. The story in the annual from last week was not the best but it seems to be missing something. I think once Azrael has its own series and Fabian has the chance to build the history of the character, Azrael can succeed. The back-ups are ehhh. Little Gotham is great.  Despite the problems, I am interested in seeing what will happen and am glad that ‘tec is getting an annual finally. BUY IT

Alright so that is it for this week. Other books worth checking out include numerous books that Batman and his allies will be making guest appearances in. Adventure Comics #3 features Red Robin teaming up with Superboy. Blackest Night: Batman #3 features the entire Batman Universe and will be interesting to see how things pan up. Booster Gold #25 will feature Batman and Robin. So there are plenty of books out there worth reading, even if there is not much I suggest you buy. So, ’til next time, keep reading.