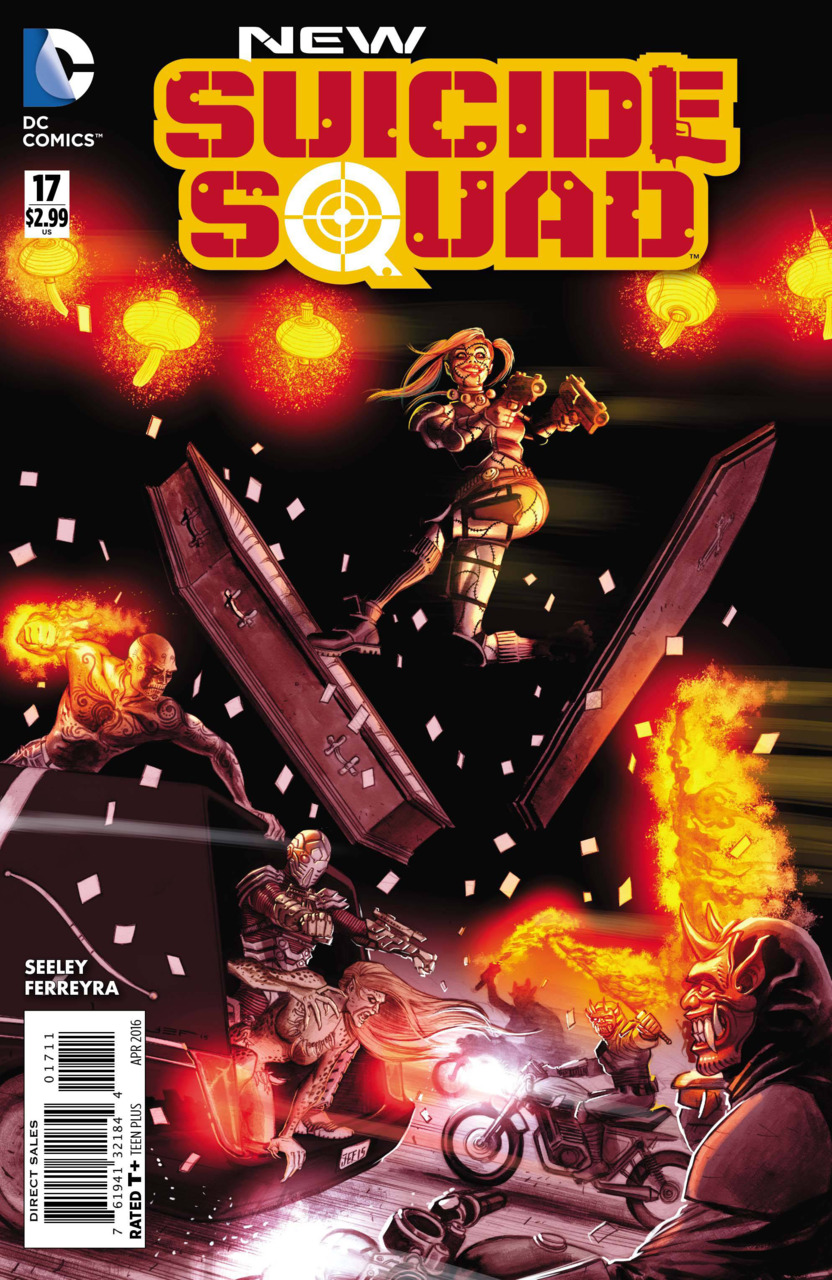 Synopsis: The issue opens with a flashback three months ago in Moscow. Horus International is helping out with providing supplies to the people there who have been apparently devastated by the results of a superhuman battle. Adam Reed is overseeing the relief effort and is beaten down by a soldier of the Russian army after trying to explain his involvement there.

The soldier accuses them of working for the American government since the fault of the attack was on the Suicide Squad. Adam’s friend, Seraphine, denounces the USA’s use of criminals in that way. The soldier contemplates revenge when a young boy walks in asking for help. After the soldier leaves, Adam states that they might need their own equivalent to the Suicide Squad. The next few panels show Adam’s superhero team that apparently gave their life for their people.

Now in present day, Amanda Waller is showing Mr. Ashemore around Belle Reve prison and the various inmates they have imprisoned there. She eventually takes him into the A-block to meet the active agents of the Suicide Squad. Mr. Ashemore is visibly in shock after the meet and greet. Waller tells Ashemore that she is the thing they hate the most and that’s why she is able to control them. The team is called into action to act as protective detail for a politician named Chen Ho in Hong Kong.

In Hong Kong, the team is dispersed throughout the crowd that has gathered in a street fair to hear Mr. Chen. After some radio chatter, the team has to act fast to save Mr. Chen during his speech when he is attacked by the gang known as the Ghost Dragons. Ashemore explains over the radio that they are attacking Chen for moving in on their business interests.

Despite taking a few hits, the team appears to be winning against the attackers but strange energy beams come out of nowhere and takes out each member. We last see Deadshot looking at a towering figure asking to “please, just make it beautiful” before his sensors flat-line and Waller is notified that he is dead. In the next few panels, each member is hit with another energy beam and their sensors also indicate that they have been killed. The issue ends with Ashemore suggesting to a surprised Waller that it is time to put together a new team.

Thoughts: Well, that ending was certainly not expected. Although with Seeley starting his run on the book I expected some changes…“killing off” the old squad is certainly one way to go about it. However, with the movie coming out soon and most of these main characters being in it, I doubt the members of A-block will stay dead for an extended period of time.

The artwork is something that I definitely want to call attention to in this issue. Many panels felt like paintings and the use of color made the whole issue very interesting to read.

The beginning of this issue was the only point in the story that had me a little confused. Not having been a consistent reader of Suicide Squad, I just was not sure where this Ashemore character fit in as well the Horus International/Adam Reed flashback. The story shows us a group of other heroes that gave their lives for their country which, I think it is safe to assume, Seeley is trying to draw a comparison between the Victory V’s and the Suicide Squad. We will see how this plays out but I think it might be cool to see one of those “incorruptible heroes” now be the villain that the Suicide Squad has to take down.

Overall, this was a nice start to Seeley’s run in that it gave us good action with some humor as well as a cliffhanger to keep us guessing.