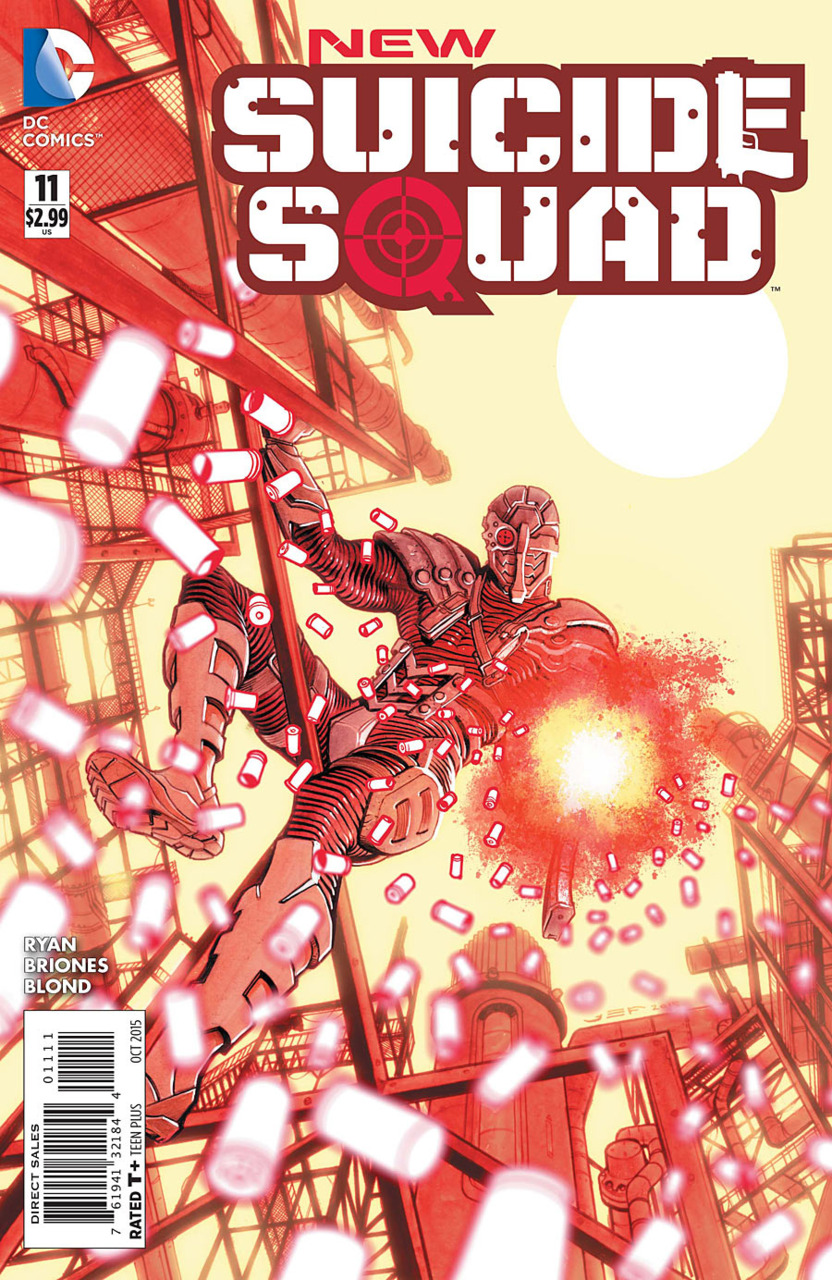 “Monsters” continues the next day. Deadshot is on the street and finally finds the League caravan racing to their destination. He calls out asking about Boomerang and Manta. He sees the truck Manta is in and jumps on board to join him. He asks about Boomerang. Manta quickly tells him that he is imprisoned for organizing a soccer match for the kids at night and he is to be punished. Manta also briefs Lawton on the mission to destroy the refinery attempting to synthesize the Lazarus Pit fluid. Deadshot is beginning to realize that Manta may be buying into this group’s ideology.

Back at Belle Reve, Bonnie walks into a meeting of Amanda and Sage. She reports that satellite images have picked up Deadshot and Manta on their way to the Corvus Corporation, a British refinery complex with the League. Sage wants to pull the squad, they cannot be allowed to attack Corvus, and predictably Amanda is against the extraction. The two continue to argue and Bonnie has an idea. She suggests that Harley, Parasite and Reverse Flash attack the League and the embedded members of the Squad to protect their cover and stop the attack on the refinery.

We see the refinery that will be attacked. A group of mercenaries fully armed are being rallied by the leader wearing a patch that says Pearl Group, the same group mentioned in the previous issue that set up the tech for Belle Reve. This man knows the League is on its way to attack and he is rallying his troops. The League attacks using the super villain weapons they have gathered in the attack, starting out with some weather manipulating gear. They continue by using fear gas canisters.

Deadshot is seen alone, he seems to have some difficulty firing his wrist guns until he pops his pills. Just then he is face to face with Harley Guinn, Parasite and Reverse Flash. They quickly tell Deadshot they are there to stop this fight and Parasite goes off and is immediately taken out by a freeze gun. Deadshot suggests Reverse Flash needs to convince Black Manta of the plan; he reports that Manta might have gone “native”. We see Harley take out some of the League members with a pipe but she is overwhelmed in the fight herself leaving only Reverse Flash. Reverse Flash runs up a tower but is then hit by a weapon blast that propels him into the sky and away from the refinery.

In another scene, the League leader has found the Lazarus fluid and is attacked by the mercenary wearing the Pearl Group patch. The two fight to a seeming stalemate until Black Manta kills the Pearl Group man.

We close this issue with an attempted communication to Reverse Flash while we see the victorious League. Harley and Parasite’s coms are not responding and we see a frozen Parasite and an unconscious Harley being handcuffed with Deadshot, Manta and the League leader looking on. The League boards their trucks and leaves the burning refinery. The last splash page shows the unconscious Reverse Flash miles outside the burning refinery with the only assumption being the worst. Next issue “Arms War!”.

Finally this issue has moved into action. The story continues with Manta fully embedded and seemingly in full agreement with the League. I enjoyed bringing the rest of the Squad in and despite the failure in the mission it was still a solid strategy to use them to try to stop the League while allowing the principle members to remain under cover. Deadshot may have worked to stop the League but I do not know about Black Manta. We leave with a good cliffhanger Manta and Deadshot are still under cover and now the League has Boomerang, Parasite and Harley as their captives. What will Waller do now? Will she send anyone else in? I guess we will have to wait until next issue. Despite my high rating, I do believe that the Squad was taken out way too easily.