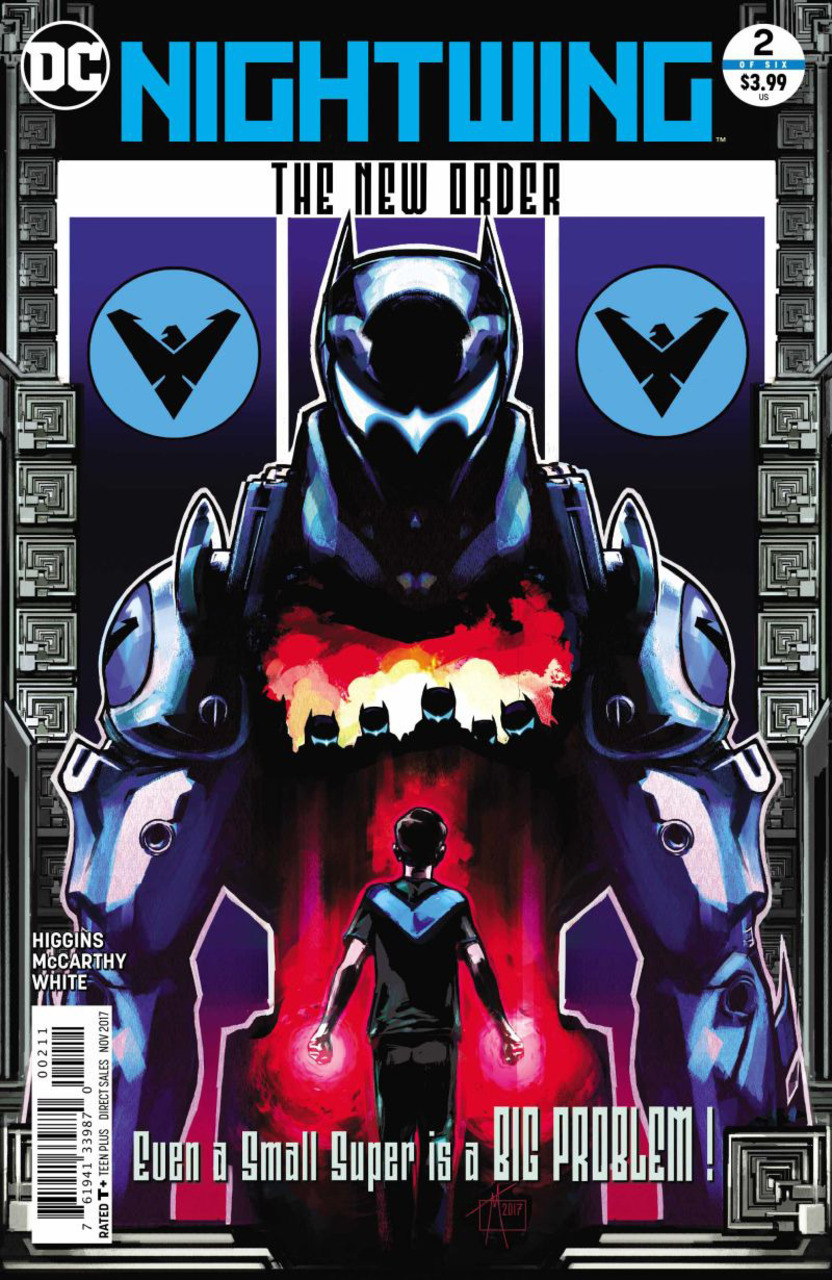 Overview: Dick Grayson’s past collides with his present as his son manifests superpowers.

Synopsis (spoilers ahead): Jake Grayson recounts the history of the powerless world – the commercialization of powers, culminating in the bloody battle of Metropolis, which Dick ended by triggering the device that wipes out 90% of the world’s superpowers, including his mother, Starfire. Dick became the face of the no powers laws, which explained why Jake hid his powers for a year after they manifested. Michael Holt, formerly Mr. Terrific, tells Dick that his son’s powers cannot be suppressed using the normal chemical means.

Driving Jake home from Holt’s lab, Jake explains he didn’t want to disappoint his father with his powers. At home, Dick and Alfred work to form a plan. Dick desperately tries to find a way to avoid sending Jake into stasis, while Alfred is doubtful.

Alfred assures Jake before bedtime that he and Dick may be at odds over superpowers, but they are united in love of Jake. In the morning, the Bat-troops assault the house to arrest Dick and put Jake in statis. Alfred defends the boy with a baseball bat, but is killed by Dick’s troops. Shocked, Jake powers up with red energy, but is tranquilized before anything else happens. Dick is led out in handcuffs as his son narrates that changing the world overnight is pretty violent.

Analysis: Kyle Higgins and Trevor McCarthy’s future Elseworlds exploration of a father/son relationship forges both forward and back in its second installment. In doing so, it both solves some of the problems of last issue, but leaves the central one still standing. The opening narration by Jake does help build up Nightwing’s motivation for stopping the world’s superpowers. While this does a lot to remove the mystery, it unfortunately doesn’t really give us a solid reason to care. We don’t see civilians being hurt by the commercialization of powers. The battle of Metropolis looks like a gorgeously rendered, but generic heroes vs. villains fight. The book never gives a reason for the battle, and while Jake tells the reader than thousands died, we don’t see any of them. For all its problems, Tom King’s current storyline in Batman, The War of Jokes and Riddles, did a really solid job of showing the cost of these kinds of battles – when ordinary people get caught between people with more power than moral awareness.

The heart of this issue, as it was last issue, is the relationship between Alfred and Jake. Though Jake’s narration emphasizes how much Dick and his son love each other, the actions we see are Alfred spending time with Jake (and Dick), and showing how he’s the true father the Bat-Family. His death gives a solid emotional punch – the tragic inevitability, the violence of the image, and the reaction of both Dick and Jake. The promise that Tim Drake as Red Robin and Kate Kane as Batwoman will appear in the next issue gives some hope that the warmth and emotional connection between characters in shared actions will continue after Alfred’s death.

As for how the story will resolve, one third of the way in, we’re still setting up the conflict – Dick’s belief in the world he created, and his desire to protect his son. The aforementioned returning Bat-Family members give some hints that Dick may have allies – or possibly antagonists, depending on where his former family members fall on the issue of the New Order. However, even though the reader knows that the Order will almost certainly topple by the end, we don’t yet have an inkling of the mechanism that will do so.