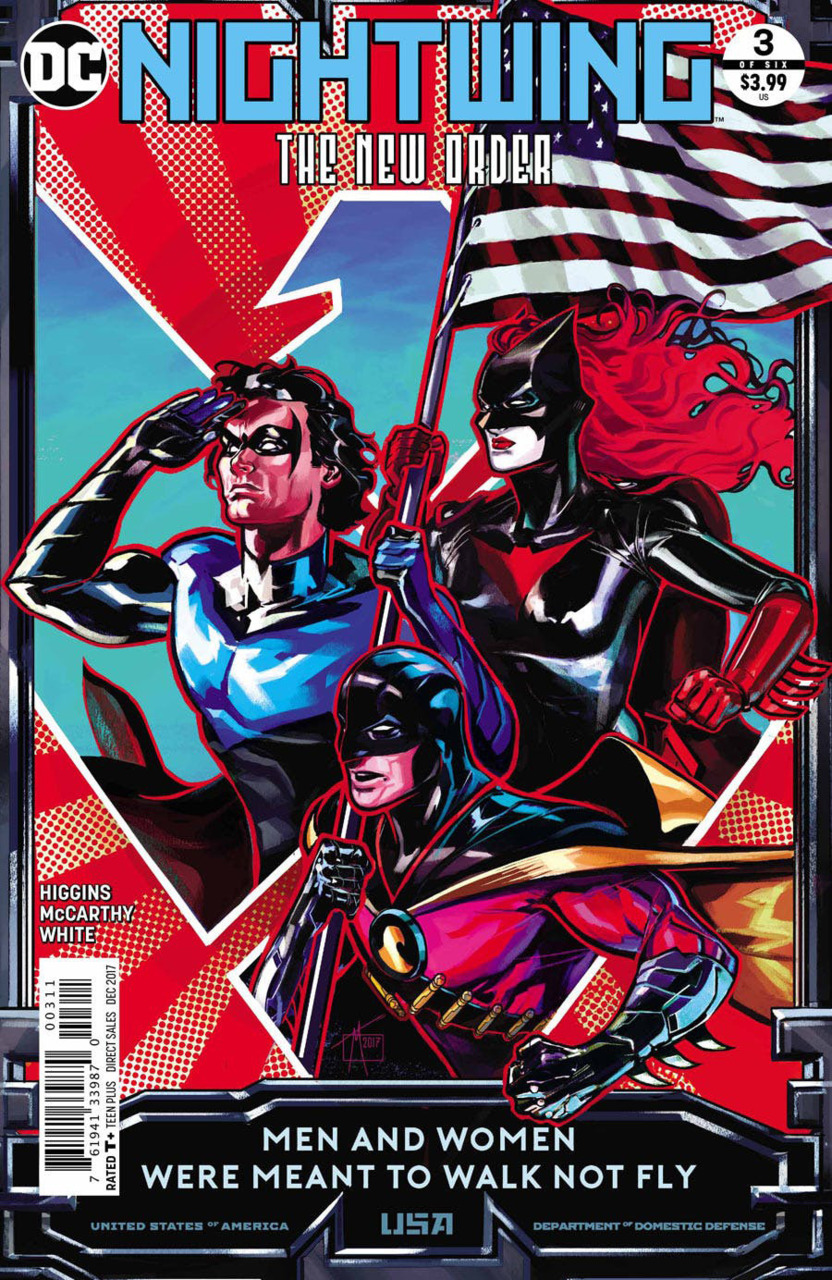 Overview: Dick Grayson goes on the lam to save his son from the society he set up himself.

Synopsis (spoilers ahead): In DC, Kate Kane learns of Dick and his son Jake’s arrest as well as Alfred’s death. She orders the officer in charge on the scene to make Dick comfortable, but not to engage. However, that officer, Brady, decides to taunt Dick instead. Harboring a grudge against Dick because his father is in stasis for uncontrollable powers. Unfortunately for Brady, Dick frees himself, takes Brady down quickly, and begins his plan. Using all of his skill and experience, fighting against an aging body, Dick takes down numerous of his own troops, and heads out to get his son back.

Tim Drake looks up from helping his three kids get ready for school to see Dick in a hoodie at his window. Dick catches Tim up on what happened to Alfred, and Tim agrees to locate Jake, but no more. He also affirms Dick’s decision to set up the powerless new order.

Dick visits the Batcave, now a tourist trap, to retrieve some gear on his mission. Meanwhile, Kate arrives in Gotham, taking control of the situation from Brady after a firm dressing down. Jake narrates her backstory, explaining that she moved from superhero to military as her perspective changed. Her relationship with Dick was never close, even though she attended his wedding to Starfire. Dick was given the Crusader program she developed by the government, leading to tension between the two. Dick and Tim both suspected something deeper than pettiness from Kate, though. On his way to save Jake, Dick is stopped by John Stewart, Green Lantern. Using the Nightwing gear he got at the Batcave, Dick fights a losing battle against the galactic superhero. Just before being knocked out, however, he is stolen by some old supervillain foes, an evil Flash and military woman.

Analysis: After two issues which felt claustrophobic in their cast and action, this issue opens up the world to more members of the universe we know and love – Kate Kane, Tim Drake, and John Stewart – and gives us not one, but two powerful action sequences. First, the escape, in which we see the Nightwing we know and love, lighthearted yet serious, starting with his handcuff reveal, ending with some classic acrobatics and punching. McCarthy and Higgins do a good job of highlighting the difference time brings – Dick’s body is still incredibly sculpted, but his joints don’t hold up as well to the extreme contact of being a superhero, and there’s a weight to his shoulders that seems significantly different than McCarthy’s rendering of Dick in the past, even as Batman in Gates of Gotham.

Kate and Tim’s appearances raise many questions. We know Kate’s father died, but not if he headed the Colony in this reality. Tim has three children shown, one named Matt, but despite the possible clue of a blonde-haired daughter, the mother of those children remains unnamed. Hopefully, like the reveal of Kori as Jake’s mother, Higgins will expand the explanation for where these characters are in the second half of the series.

Speaking of which, as the hinge of the book, it’s more than time to start getting into the deeper plot, and possibly the direction which will lead to Dick changing the world yet again. Two outcomes present themselves at this point. Either Dick destroys his New Order, leading to a world of wonders and terrors again, or he and Jake become fugitives, on the run. The appearance of supervillains in the final page seems to indicate that life as a fugitive may be possible, lending some weight to the latter plot option. However, a life as a fugitive doesn’t work as well unless a sequel is also announced.

All in all, Higgins and McCarthy have put The New Order on better footing than the previous two issues, but like Dick Grayons himself, they’re playing on a tightrope rather than laying a solid foundation for a satisfying conclusion. If they slide back into the glacial plot and low stakes of the first two issues again, all the potential of this setup could be for naught. Let us hope, though, that the story continues to expand, taking Dick and Jake to the wider world and possibilities that await in the richness of a future DC universe.

Final Thoughts: By expanding the cast of characters, Nightwing: The New Order picks up some momentum.