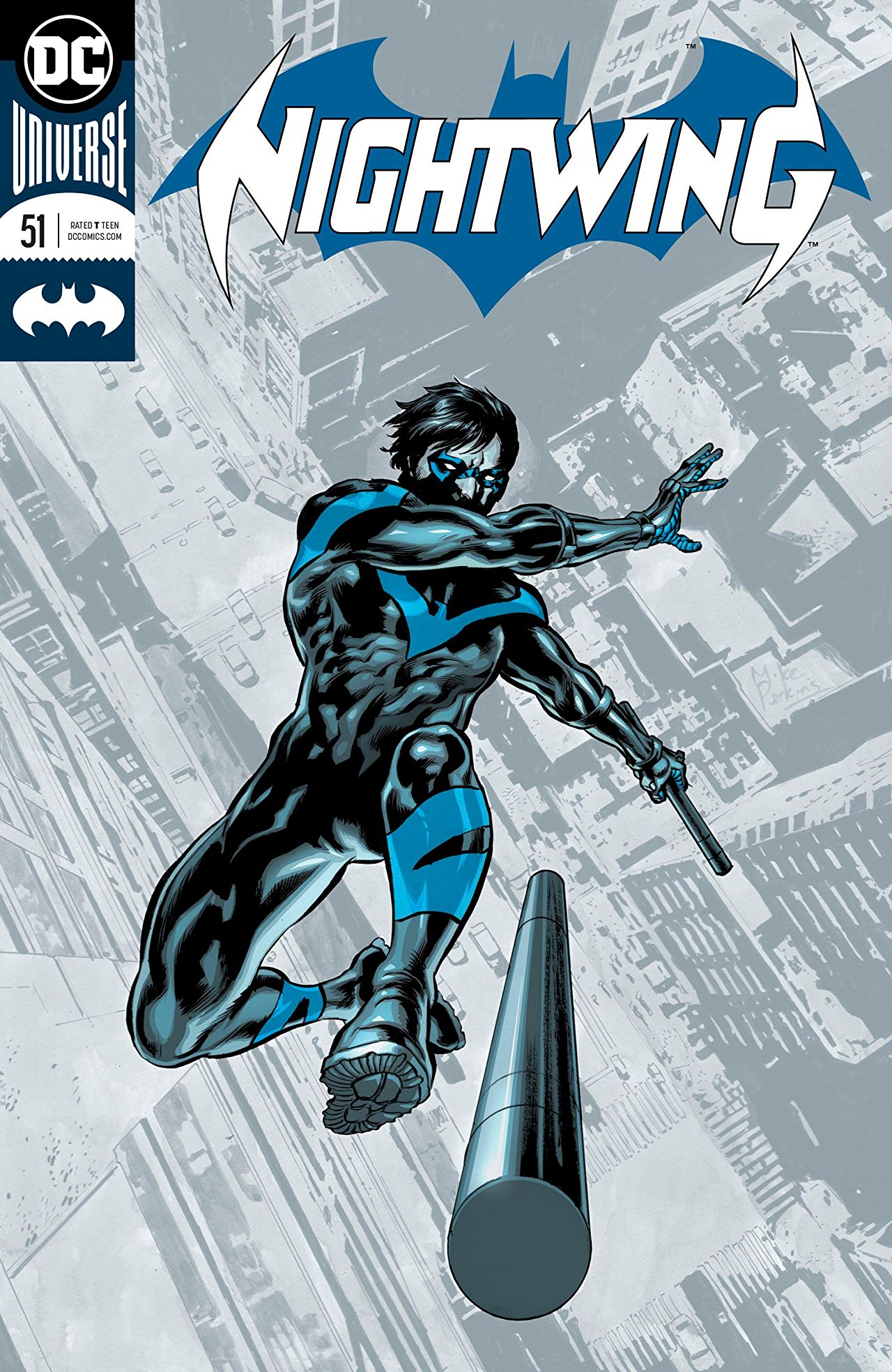 Overview: “Ric” Grayson tries to move past Nightwing and live a normal life, but Bludhaven may not be done with Nightwing just yet.

Synopsis (spoilers ahead): Detective Sapienza and the fire department investigate the burnt remains of Nightwing’s former hideout. The detective confirms the scene is clean and the emergency crews move on.

Dick has fallen asleep at the counter of the bar where he has hazy nightmares of his past as Nightwing. He awakens with a start and discovers that Alfred is there watching him. Alfred pays for Dick’s drinks and Dick tells Alfred that he is doing fine. Alfred offers to drive Dick to work, but Dick declines.

Elsewhere, the wife of the murder victim seen in the previous issue tries to come to terms with the death of her husband by going to therapy with Dr. Crane. He says that he is going to teach her to embrace her fear.

Dick clocks in for his shift as a taxi driver and uses his time driving people around to think about all the people trying to help him and how they all care about something. He stops outside an old shop that he keeps coming back to just to look at the jewelry that reminds him of his mother. While he’s lost in thought, a thug pulls a gun on him and demands his money. His body reacts on muscle memory and he knocks out his assailant.

Back in Nightwing’s former HQ, someone who is presumably Detective Sapienza dons the Nightwing costume and says he’s going to make a difference in Bludhaven.

Analysis: As I mentioned in my review of the previous issue, I’m really not a fan of this new status quo for Nightwing. I don’t want to rehash many of those critiques here, so I will instead just focus on this story and not the bigger picture. I really liked that Dick’s personality in this issue is more like his normal self. He politely declines Alfred’s efforts to help him instead of the extremely rude way he shut down Barbara’s attempts in the previous issue. I also appreciated Alfred trying to show how he empathizes with Dick’s struggles by talking about his experiences as a soldier. As much as I enjoyed seeing Dick talk about his struggles with someone, my interest quickly dissipates when I realize there’s no good reason for Dick to want to be this willfully ignorant.

The only thing connecting this issue to the crime at the end of the previous one is a single page where the widow is doing counseling sessions with Dr. Crane. Given his infamous status as a known criminal, I find it hard to believe that he is able to set up his own practice especially under such a crude alias (Gruidae is a scientific name for cranes). The single page seems out of place and like an afterthought in an issue that makes no other reference to the crime. After two issues in this story, I’m still uncertain how Scarecrow and the murder are related to Dick’s current state. Right now it’s a parallel narrative with no connection.

I love Travis Moore’s art, but he’s only doing art for half the issue. Garry Brown handles the second half and unfortunately, his art is not my cup of tea. Many of the faces and bodies were misshapen and a lot of the panels lacked the meticulous detail Moore puts into his backgrounds. The transition between artists was quite jarring for me.

The final page has a new character, Detective Sapienza, claiming the abandoned Nightwing costume for himself. I can’t imagine DC is really going to make an unknown character like Sapienza Nightwing long term. In the comic world, I can’t see how someone who is supposed to be smart (Sapienza is a detective), thinks it’s a good idea to claim the costume of Batman’s first partner. Surely they would know that the Bat-Family would be all over them the second they decided to show their face in public? Given those two facts, I don’t really understand this direction. Furthermore, if this is the direction they were going to go in, it would have made more sense to use Detective Svoboda who has been a staple in the Nightwing series for a long time.

Final Thoughts: It’s painfully obvious that the story is cobbled together at the last moment from leftover scraps and a few new ideas from the new creative team. It’s extremely disjointed and would get lower than a neutral grade if it weren’t for Moore’s art.