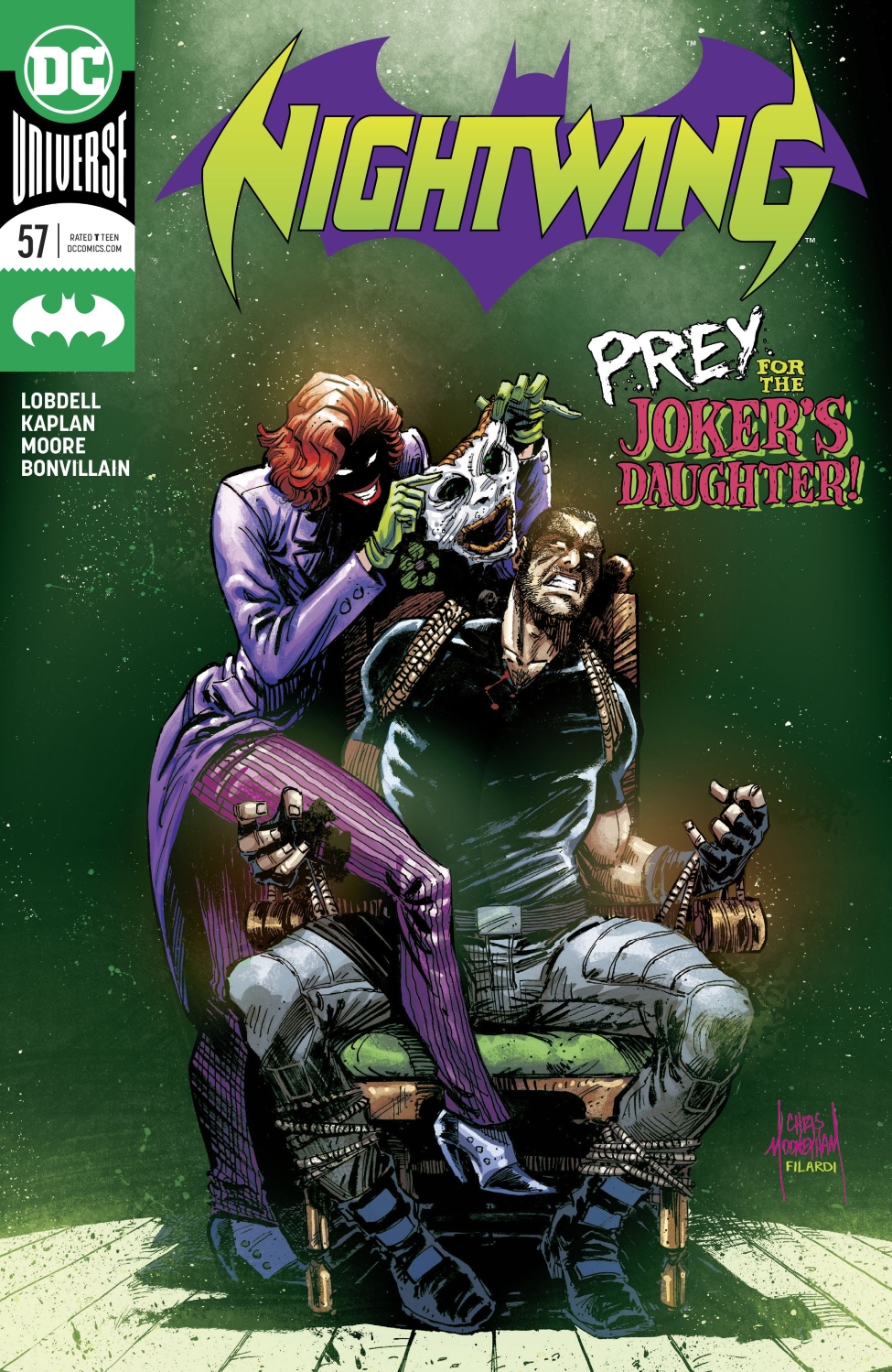 Overview: Ric Grayson and Bea continue their relationship as the Joker’s Daughter decides to make a dramatic entrance into Bludhaven politics.  Bonus content: a visitor from Gotham!

Synopsis (spoilers ahead): Ric and Bea enjoy a walk through the snow as Ric reflects on his decision to help the Nightwings defeat Scarecrow.  He agrees to go support Bea as she fights for the shelter to remain open.

Detectives Colleen Edwards and Svoboda are visiting a suspect at his house to ask him about the suspicious deaths of some young women.  They leave because they cannot get him to talk and they have no authority to force him.  Detective Edwards is frustrated about this and returns right away in her Nightwing suit to force him to talk.

At the shelter, Bea makes a speech to councilman Pollard requesting that he do everything he can to keep the shelter open because the people need it.  Pollard reveals that he won’t do it because he needs to turn the ground the shelter is on into a parking lot for a proposed stadium two blocks away.  As the assembled crowd expresses outrage, a hooded figure among them makes an unheard promise to do something about it.

Ric drops Bea off at the Prodigal Bar and decides to go get his taxi before his shift.  Bea walks into the bar and finds Barbara Gordon there waiting to see her.

Councilman Pollard is being chauffeured through the streets of Bludhaven as he takes a call with Vicky Vale when his car is shot up by the Joker’s Daughter.  She decides not to kill him and takes him captive.

At the taxi dispatch, Ric discovers that his taxi was heavily damaged in the attack and was brought back by Detective Sapienza.  Sapienza says he doesn’t care who Ric is, but would want to count on his help next time something happens.  Ric agrees.

In the sewers, Joker’s Daughter throws acid on Pollard’s face.

Bea and Barbara have a conversation about Ric.  Barbara says that she is happy Ric found someone like Bea and says that their past relationship was purely professional.

A ragged and scarred councilman Pollard shows up at a fancy restaurant with a bomb strapped to his chest.

Analysis: I am very tired of the “Ric Grayson” aspect of the Nightwing series, but I think there’s a lot to like about this issue.  For starters, I think the whole subplot with Bea, Pollard and the shelter is fairly well thought out and gives worthwhile social commentary that fits in seamlessly with the story.  Secondly, I enjoy the fact that Bea and Ric seem to be developing a relationship that is lasting longer than a few issues.  Even when Ric inevitably regains his memories, I hope Bea continues to be a supporting character in the Nightwing series.

The team of Nightwings is still present in this issue but they understandably take a back seat to what’s happening with the shelter.  Colleen Edwards had one of the more confusing moments in this book when she returns to the suspect’s house as Nightwing despite leaving as a police officer seconds earlier.  Where did her Nightwing costume come from?  Did Svoboda not notice when her partner on the case disappeared?  Detective Sapienza has an interesting discussion with Ric and it seems like Ric is already on the path to choosing to become a vigilante again.

Duela Dent, the self-proclaimed “Joker’s Daughter”, makes an appearance in this issue and I can’t say that I understand why she is here.  Like most people, I do not particularly like the character so it’s a little frustrating to see her included in this story when I’m not sure she really fits.  In the scene where she scars Pollard with acid, there are hints she is going to use him to subtly manipulate Bludhaven politics.  Instead, we get a very straightforward trope of someone being forced to wear a bomb in a public place.  It’s a conclusion that isn’t really as elegant as the setup that proceeds it.

I don’t want to sound too critical because there’s a lot I like about this book.  I found myself very invested in Bea’s struggle to keep the shelter open for people who need it and resist the gentrification of her neighborhood.  I liked that the story painted her actions as real heroism because being a vigilante only goes so far.  Barbara showing up was also a nice touch.  The conversation with Bea was short, funny and a little tense, but it still connects the story to Dick’s old friends and family and shows us that they care about what he’s doing by checking in on him.

The art is absolutely stunning.  Moore and Bonvillain deliver an exquisite visual experience for the reader.  This issue is more about character moments than it is about action scenes, and there is definitely a warmth to the more intimate scenes.  I really hope we see this art team on this book long term.

Final Thoughts: Despite some minor plot holes and some awkward dialogue, this issue has a very well thought out premise and features incredible art.  How good the story ultimately ends up being, will depend on what happens with the Joker’s Daughter and councilman Pollard in the next issue.