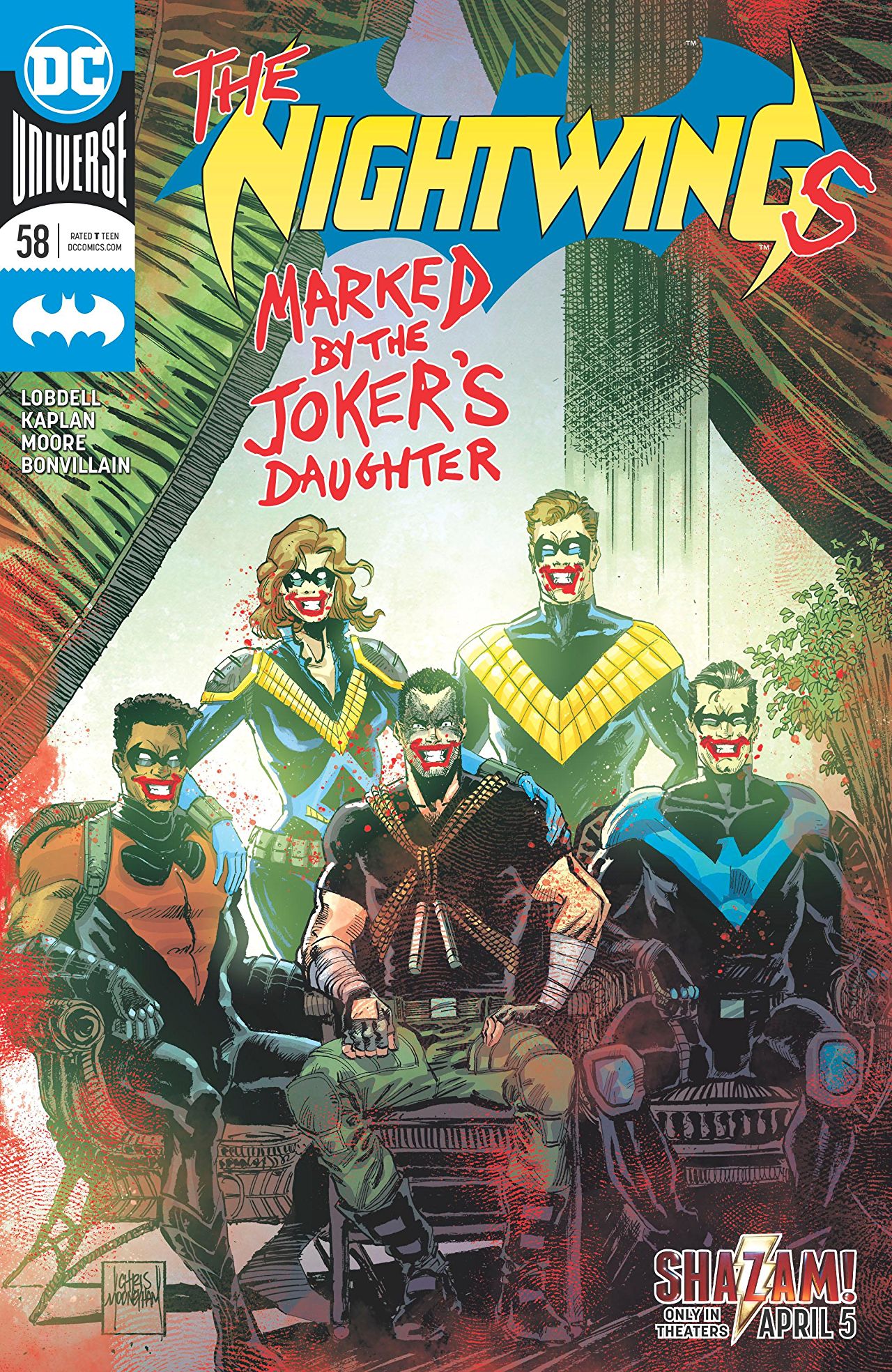 Overview: Ric Grayson gets involved as the Joker’s Daughter executes her plan.

Synopsis (spoilers ahead): Zak talks with Hutch about his motivation for putting on a police uniform and why he feels ill-suited to being a Nightwing.  Hutch listens but says it’s time to go help the people at the Oasis Club.  In the Oasis Club, Councilman Pollard asks for help as everyone recoils in fear and Joker’s Daughter watches it all unfold over multiple video feeds from an undisclosed location.

Ric is about to start his shift at the taxi dispatch when Detective Sapienza stops him and says his skills are needed.  While they drive to the Oasis Club, the other Nightwings try to find a way in without tipping off whoever orchestrated the threat.

Meanwhile, Colleen Edwards is with Detective Svoboda at an art museum looking for the victim of the suspect Colleen beat up in the previous issue.  As they find her, Colleen gets a call from her brother asking where she is.

At the Oasis Club, Hutch gets close enough to see that Pollard isn’t the one pulling the strings.  Pollard tells them it’s Joker’s Daughter as she remotely activates a device that will cause the building to collapse.  As Zak tries to get the explosive vest off Pollard and Hutch gets people to safety, a minor explosion puts a hole in the floor.  Joker’s Daughter emerges and attacks Ric.  They continue to fight as Hutch and Zak successfully diffuse the explosives.  Joker’s Daughter appears knocked out but then the detonator emits a cloud of harmless smoke that allows her to escape.

Ric leaves and finishes off his taxi shift when he sees Barbara Gordon looking for a taxi.  She says she is leaving and needs a ride to the airport and Ric volunteers to take her.  Barbara apologizes for not accepting who he is now while Ric mentions that her faith in him played an important part in helping his recovery.

Analysis: I apologize in advance because I find it very hard to find anything redeeming about this issue outside of Moore and Bonvillain’s stunning artwork.  Nothing really happens in this issue, and what does happen doesn’t make sense or seems contrived.  Coming into this issue, I really felt like Joker’s Daughter’s role in this story would be meaningful for a change.  There were hints that she would impact the story in ways that would explore concepts like a class conflict with a decent amount of complexity.  All that potential is thrown away here where her plan is incredibly generic and executed with the effectiveness of someone who is trying to fail.  Nothing about what happens inside the Oasis Club makes any sense to me.  Joker’s Daughter’s motives are flimsy at best, she simply allows the Nightwings to remove the explosives and diffuse them despite her holding the detonator, and then she tries to fight them hand to hand and ends up just vanishing.  She has to be the worst villain ever because even Condiment King could have come up with a better plan.

The dialogue also feels very awkward and some scenes just feel out of place.  For example, the scene with Ric and Sapienza at the taxi dispatch just felt like bad pacing.  I’d also like to see comics make use of thought bubbles instead of speech bubbles on the pages where the villain is alone and explaining their plan.  It felt weird that Joker’s Daughter is sitting in a room alone going into a soliloquy about what she’s going to do.  Also, how did she get at least thirty-two different TVs all hooked up to a different camera angle in the Oasis Bar?  I liked that Barbara made an appearance, but it just felt out of place considering what’s come directly before it.  One second the Nightwings are disrupting a bomb threat, the next second Ric is driving Barbara to the airport.  I also don’t understand why Ric would call Barbara “Babs” if he has no recollection of their past.  It seems more logical that he’d refer to her as Barbara.  I’m not going to even get into how corny the dialogue is between Ric and the Joker’s Daughter.  Overall, the pacing and dialogue just felt way off.

As I mentioned earlier, the art in this issue is phenomenal and really carries the rating I give this issue.  Moore continues to be one of the best, and perhaps the best, Nightwing artist and Bonvillain’s colors make sure the story and action jump off the page.  If you’re going to get this issue, it’s because of the art.

Final Thoughts: Amazing art only goes so far towards saving this issue from an illogical plot, uneven pacing and awkward dialogue.  Probably one to pass on.