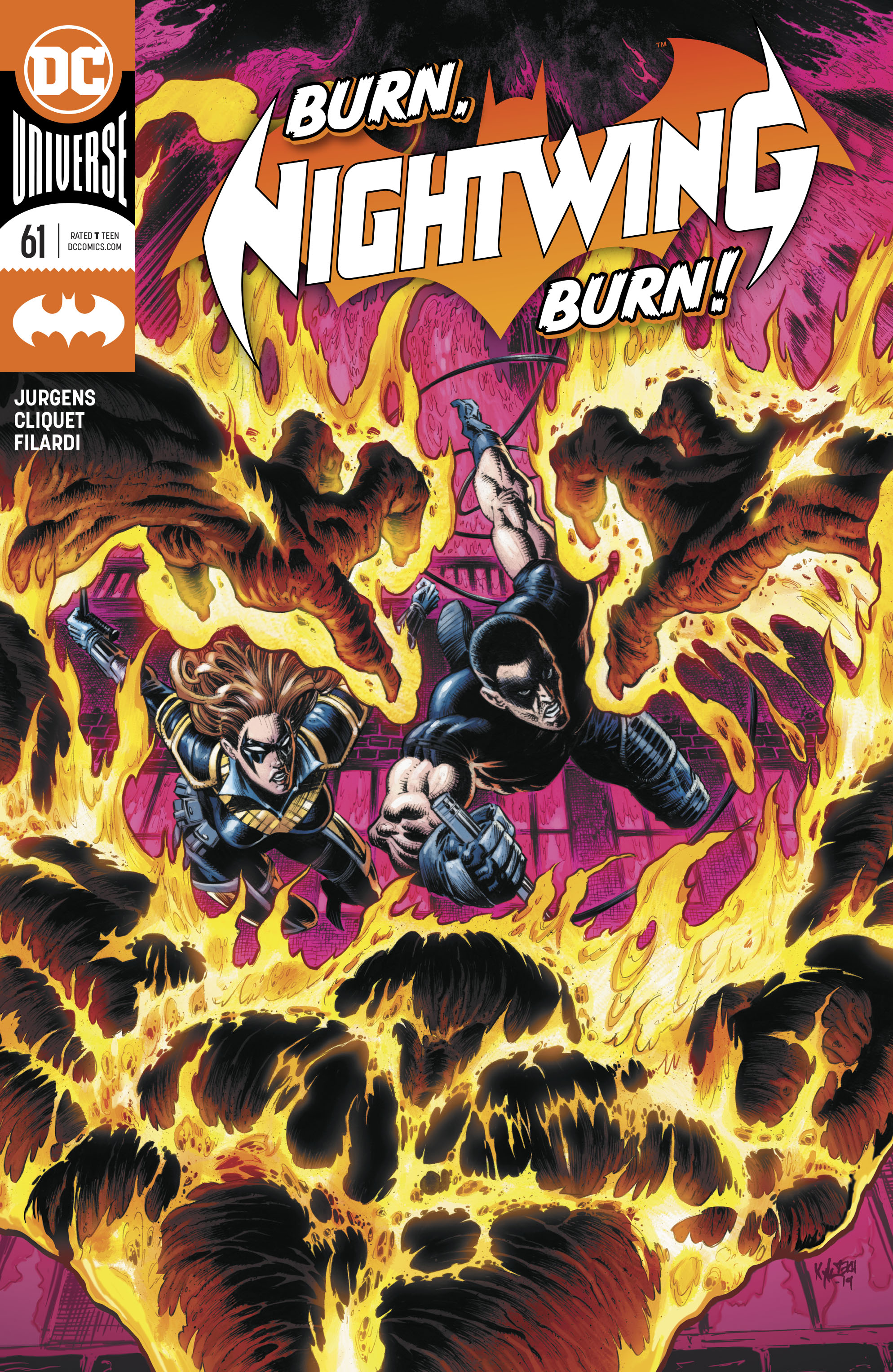 Overview: Ric and the Nightwings finish up with the fire elemental, putting a close to this case.

Synopsis (spoilers ahead): Our issue begins like many before, with Ric monologuing to himself about not having his memory, with a few added prose about the current events going on in the story arc. He then dives in to help out Nightwing Gold, who is currently engaging the fire elemental from before. Ric dives in, and behaving quite intelligently, helps Colleen pat out the fire on her and escape the elemental’s current attack. Unfortunately, Colleen’s brother Zak is still in the burning parking lot from the last issue, so our hero rushes in to rescue him while she attempts to use a fire extinguisher to hold off the elemental.

Ric manages to find him, uses a breathing apparatus that he somehow has and gets him to safety. Meanwhile, Sapienza and Hutch are illegally searching through people’s homes for evidence on the elemental when they see Melissa running scared from the attack. The two run in to help the rest of the team and they fight the elemental as it reveals Melissa is his daughter. Zak drives a stolen car into a fire hydrant in order to put out the elemental. The heroes try to make sense of how the elemental could be Melissa’s father when he’s comatose in the hospital, and they just throw out the idea of a metahuman as the obvious answer.

Melissa’s father apologizes for his actions as he dissolves away and they rush Zak to the hospital after his hit-n-run stunt. Afterward, Melissa’s father’s brain signals begin to die and so they pull the plug. Ric ends the issue with him pondering that his amnesia is a blessing if his life as a vigilante was anything like what the Nightwings deal with.

Analysis: Unlike the last issue, which I gave a decent grade of, this issue is pretty bland. There are a few creative elements added to the fight against Burnback, with Ric helping Colleen put out the fire on herself, but there’s a lack of real attention to what’s going on. Ric is holding onto a long cable/rope as he dodges Burnback’s attacks, but it serves no purpose, so it just looks weird. I was expecting him to use the cable to ensnare the elemental or cut it up, doing something to incapacitate it since they can’t hurt it.

The reveal that the elemental is Stapleton was also a really underwhelming one. Nothing in the previous issues hinted that the elemental was a psychic projection. Typically in stories involving abstract phenomenon like this, the elemental is more intangible, less substance. But it’s smashing through buildings, and taking up a lot of space on the screen which implies form. Implying a form then implies its a single entity. Yes, there are cases like Clayface breaking off elements of himself and controlling them, but Clayface himself is shown to us, he’s an active person, and the capabilities of his powers are already explained that a new element like puppeteering himself is not a hard stretch.

Burnback is a new villain with unknown powers, we have no idea what he’s capable of. So it’s not so much a “twist” that he’s a psionic manifestation of a coma patient, and more just a plot beat. We were never supposed to figure it out. But the structure of the narrative was handled to imply we were reading a mystery. The metagene twist could have been a good angle to go in, but it would have been better to introduce the metagene to the equation before revealing that the father is one. Maybe give Melissa herself a metahuman power. Reveal she has the genetic ability. This then leaves a hint that her father may also have the metagene.

Final Thoughts: I feel like this story arc was supposed to be longer, four or possibly five issues. But Jurgens was told otherwise and was forced to cut it down to three. Really underwhelming ending to a pretty average storyline. Let’s see what happens next issue.