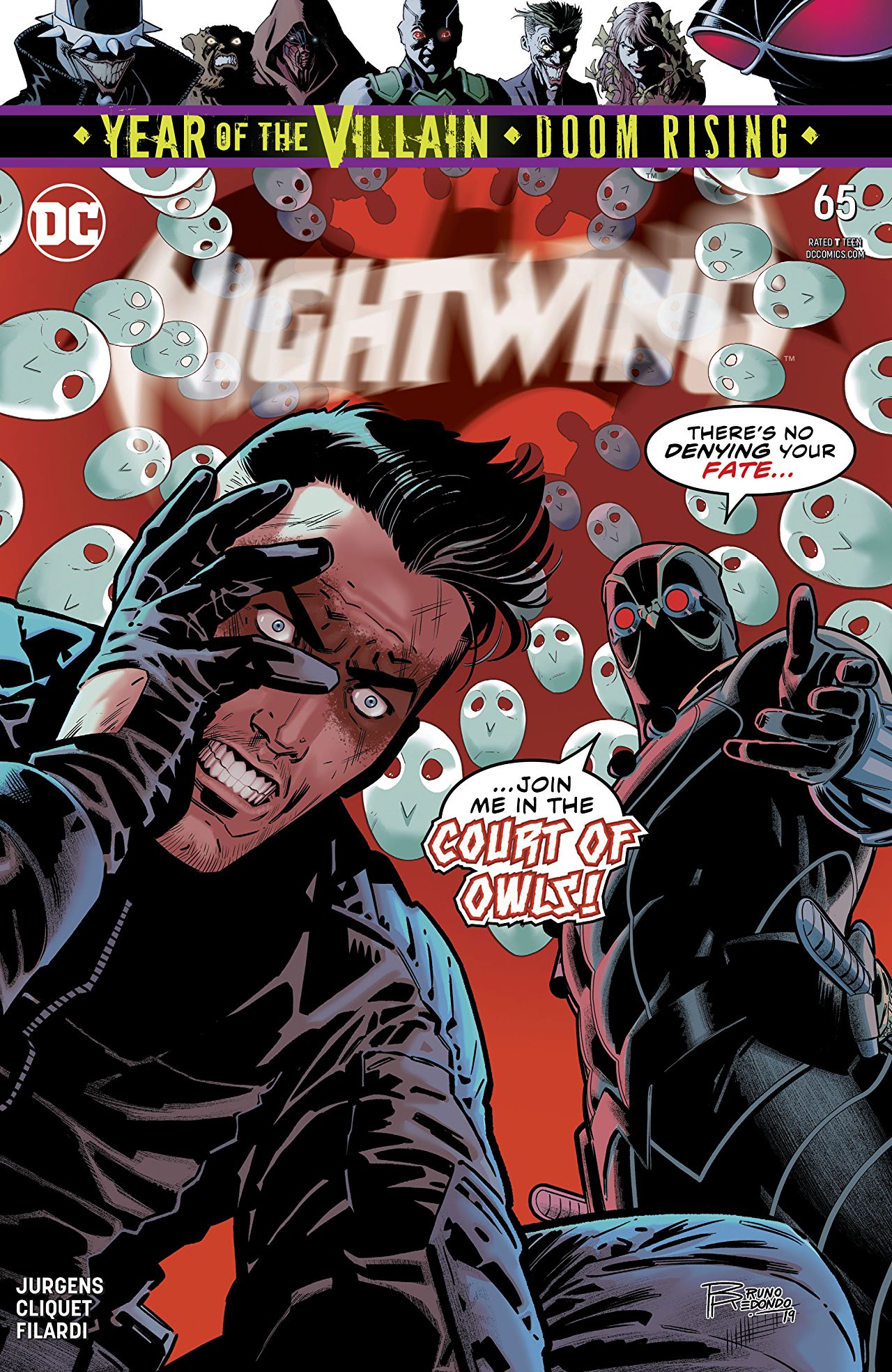 Synopsis (spoilers ahead): We open with an exposition about what has been happening these past few issues: Bludhaven is on fire, the Nightwings are trying to help, Zak was beaten to critical condition, and Ric is trying to save Bea from Talon.

Talon postures menacingly and keeps trying to monologue about family and history, but Ric keeps wanting to fight, though he’s incredibly outclassed by Talon. Talon makes a point that he doesn’t want to kill Ric and then tosses him off a building to leave him pondering about all this. Ric then picks up two random pipes from the trash to replace his escrima sticks.

Bea then jumps on Talon and climbs all over him like a child wrestling with their parents. Talon makes a point that he doesn’t want to kill Bea either because of her importance to Ric and that this is all part of an incredibly “detailed and coordinated plan” that will bring Ric into the Court of Owls.

Ric returns to the fight and now armed, he calls Talon a bully for only fighting inferior opponents, but Talon shuts Ric up by completely pulling apart his fighting tactics. He talks about the importance of fighting to kill rather than fighting to protect, and how he wants Ric to abandon all that in order to become an assassin. Ric tries to remove himself from Talon’s idea of what a “Grayson” is, but Talon dumps Ric’s history onto him, expositing the Court of Owls’ backstory.

We cut away to return to the Nightwings who are doing riot control. Nighting Gold is back after acting like she was going to quit the last issue. The remaining trio go to stop a mob riot trying to raid the free clinic of all places and Nightwing Red steps up and is at first able to talk sense into them all. Appealing to reason and civic pride, but then all of a sudden something makes the sky glow green and makes all the people panic and rush the Nightwings to get into the clinic.

Returning to Ric and Talon, Ric denies that Talon can be his great-grandfather on the grounds of “you’d be so old, you’d be dead”, which doesn’t really hold up at all in the DC Universe, especially since Ric just fought the psychic projection of a dying man that formed into a fire elemental. Then they begin to see the sky glow green and show the same symbol that’s been showing up in every other comic this month. They ponder over what it means and Talon declares “the moment has come for humanity to embrace a very new reality”.

Ric then attacks Talon with brutal hits, repeating the exact same “you’d be really old” argument from before, and takes off Talon’s mask to see who he is. Ric is taken aback for some reason because he was in his cab earlier (thanks for the editor’s note) and Talon uses the confusion to trip him and exposits some very abusive-parent logic about he has authority over Ric because of lineage and how he wouldn’t exist if he didn’t first have his own son.

He pulls out a pair of talon-goggles that he got from the Court of Owls, using that time to also exposit how he’s stayed alive and young for so long. Bea once again jumps on Talon but is easily tossed off and Ric tries fighting back, only for Talon to give him a clean jab to the jaw. Talon reveals he plans on using Ric’s amnesia as an opportunity to reprogram him into another Talon. Ric is too beaten and exhausted to fight back and Bea is completely out of her league as the issue ends with Ric taken under Talon’s sway.

Analysis: This issue didn’t really draw me in like the previous two issues of the storyline. While the first had a good set up and pacing, properly establishing characters and setting, and the second issue took the already good pacing and turned it up to eleven to make it feel like there was just no stopping, this issue grinds it down to a halt, but doesn’t do anything really with that extra time. Nightwing Gold’s little character arc going from the last issue to this issue didn’t really matter at all since we only interacted with her last issue for about two pages and it felt really hamfisted. We didn’t get to see the team struggle without her, and her appearance this issue didn’t do anything to improve their situation. Nightwing Red was the only one really doing anything active this issue so perhaps they should have just not included her and mentioned her absence between the two.

Talon was also a big disappointment by the end of this. He was building up such a presence in the previous two issues and then his big monologue devolves into “I made your grandpa so you should do whatever I say”. Even if Dick knew who Talon was, this would be a stupid argument. But that’s nothing compared to Ric relentlessly just making the same argument that Talon would be too old. This becomes a problem where its basically just two people having completely unrelated conversations in the same room.

The night choreography is decent but not amazing. I like the idea of Talon being able to beat Ric because Ric doesn’t have any tactical knowledge. Sure he has all the reflexes and muscles, but he doesn’t really know how to use any of it, which results in him leaving himself open all over the place against a professional fighter. But the story doesn’t really go anywhere with that. In fact, it even has Ric get the better of Talon just out of pure rage and passion, which devalues the argument that Ric even needs to learn tactics. Especially with how weak a defeat Ric gets given. He just gets tripped and knocked down and suddenly he’s dead weight.

Bea was also very one-note. I get the feeling Jurgens didn’t really know what to do with Bea after he got her to this place, but also didn’t want to just abandon her and turn her into a paper hostage, while at the same time still wanted to make Talon this unbeatable adversary, which results in Talon just throwing Bea around like a ragdoll, and its kinda pathetic looking. Like it doesn’t make Bea look badass or break the stereotype that all Bea is is this helpless damsel needing to be rescued. It just further infantilizes her by having her jump on and climb all over Talon like a toddler on their parent’s back. Maybe Jurgens was intending that, to play off the parent vibe, but that’s not the way to go with this.

Honestly, this entire issue could have been really good. The previous two issues were setting up so much groundwork for it and making me look on with anticipation, and it turns out the big plan Talon has for our amnesiac protagonist, is to brainwash him. And before we wait an entire month for the next issue, let me just lay down why this just isn’t going to work. Ric is a blank slate. His entire character is defined by his lack of character. Stories involving a character getting brainwashed are used for one of two reasons. The first is you want to remove the hero for a bit to give the supporting cast a chance to shine and maybe force them to fight the hero and show the character that way. The second is to use the brainwashing to create a dark reflection of our hero, challenging the current understanding of them. But we don’t understand Ric really at all. We know he’s a good guy and he wants to be left alone to find himself, but dark reflections shouldn’t be a thing that happens while a character is finding themselves if anything, they come right after the character has done some good soul searching and learned who they are. Or the reflection is used to cement that understanding at the very end.

We barely know the supporting cast around Ric and none of them have a strong relationship with him. Bea only just learned about Ric’s vigilantism so even his closest companion isn’t really that aware of everything going on in him. The closest friend Ric currently has is Zak and he’s in the hospital, and he’s only counting as “closest” because of their bonding moment two issues ago.

Final Thoughts: I’m not totally lost on this issue. it hasn’t done anything unforgivable yet or make me question my purchase. It’s just a big let down since the last two issues were giving me so much hype.