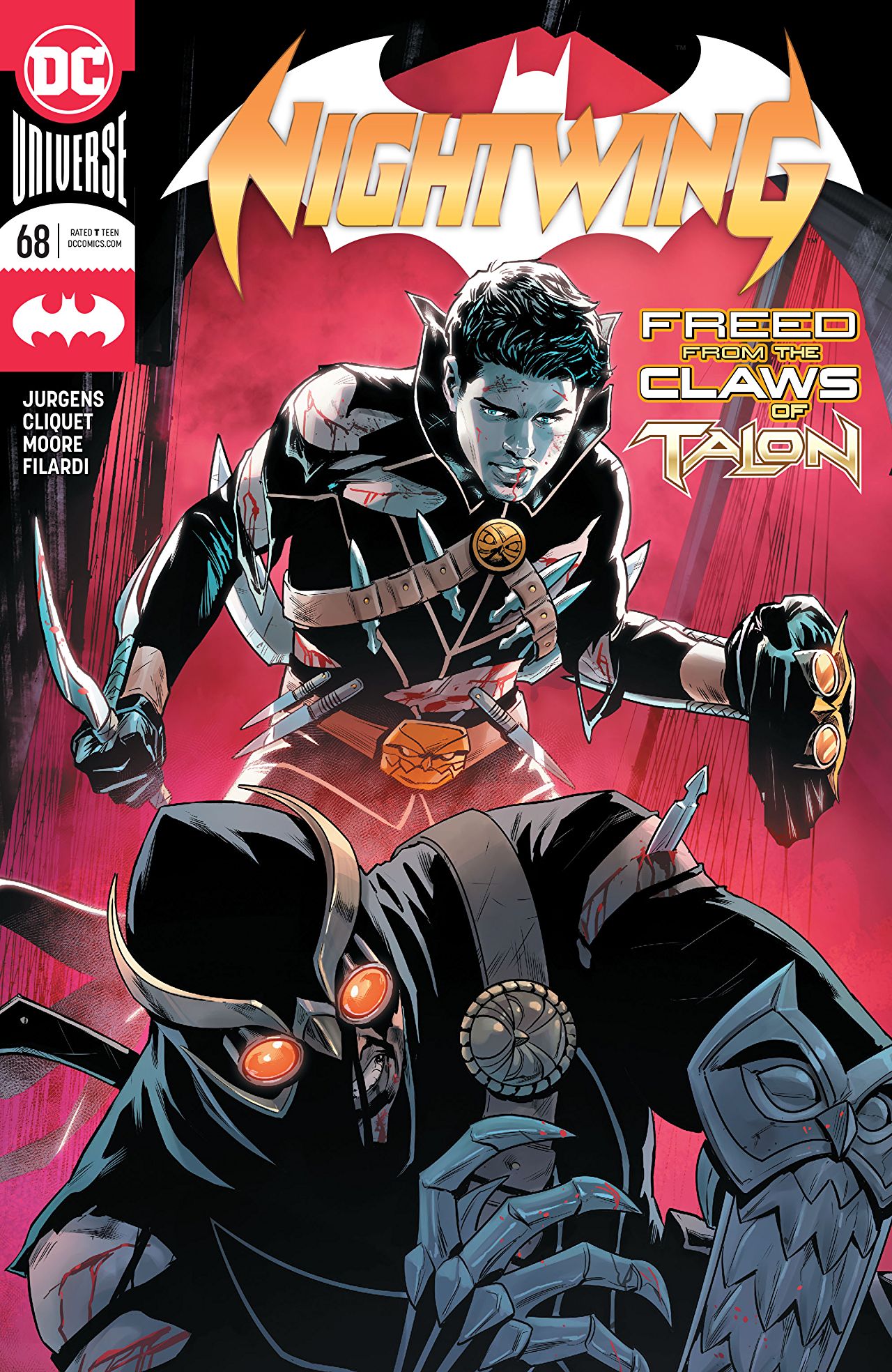 Synopsis (spoilers ahead): In his mind, Dick is confused about the moments flashing before his eyes. He cannot tell if he is dreaming or if the moments he sees happened. He sees glimpses of his former life. Was he a hero? If so, then why does he not feel that way now? He sees so many people and cannot believe he was close to them.

With his mask shattered on the ground, he asks the man below who he is. Condor Red says Ric was about to kill him until a few minutes ago. Confused, Ric says he would never do that. Nothing makes sense. He almost felt like he was something else. He feels like he is two people. Someone must be messing with his mind. It must be Talon.

From across the street, Talon curses that Grayson knows who he is. His associate, Hass, says the barrier they created between his real and false implanted memories was bound to crack. He must not be allowed to shatter it. It is up to Cobb to make sure he stays with the Court.

Ric throws down his utility belt and all the blades off the roof. He takes off the uniform. He picks up two pieces of metal for makeshift escrima sticks. For once, he feels like his real self.

Cobb yells that he will not let Grayson throw away his proper past and his destiny. Ric might not have known what was happening and is still unsure about his memories, but he for sure knows he is not a killer. He will not let Cobb corrupt and manipulate him any further.

Bea tells Malcolm to stop the car. Malcolm cannot believe that the second Talon was the cabbie. Bea says it was not really him; he was not fully in control. Malcolm still cannot understand how a peaceful man can become a stone-cold killer. Bea retorts that the real person underneath that Talon mask is not a killer and is why Malcolm was not killed the other day. The real problem is that even if Ric were not a killer, the lunatic he is fighting is.

Ric realizes it was the goggles that were rewriting his memories. Cobb gloats that Grayson has now lost his edge since he is not willing to kill. His inhibitions have returned and fortunately, Cobb is unburdened of inhibitions. Ric takes that as fuel and takes the fight to him. They fall off the bridge, and Ric is not scared. It is like he has trained for this many times. However, he was a few inches away from the handhold, and fortunately, Malcolm caught him. Cobb falls in the water and gets away.

Bea runs to him and is grateful that everything is okay. Ric says he is sorry for attacking Malcolm saying it was not his true self. He will catch up with the other Nightwings soon, but he needs to talk with Bea immediately.

Bea, concerned that she lost her Ric, cries in his arms. Even though he has two sets of memories, he knows one thing is real: every moment with her is real. He holds her tight and reassures her.

Analysis: I have really enjoyed Jurgens’ run on Nightwing. With him at the helm, I really believe this book has turned itself around from being one of the worst books in DC’s lineup to one of the most enjoyable books. He is getting back to the real Dick Grayson, and that is what fans want.

I think having Talon and the Court of Owls be the catalyst that causes Dick to start to remember his previous life was a great choice. And, I think it is a natural fit for that to be the case. The Court has always wanted Dick, and if they had played their cards right, they could have had him brainwashed to be a Talon.

This story confirmed many important moments in Nightwing continuity. Two moments that I want to bring to attention are (1) Dick putting on the cowl and (2) Dick proposing to Babs. Since the launch of New 52, these important parts of Dick’s history were ignored or just not mentioned at all. It is cool to see these moments be restored. For true Nightwing fans, it feels like their Dick Grayson has finally come back.

Final Thoughts: I really enjoyed this issue and I am excited to see where it goes.