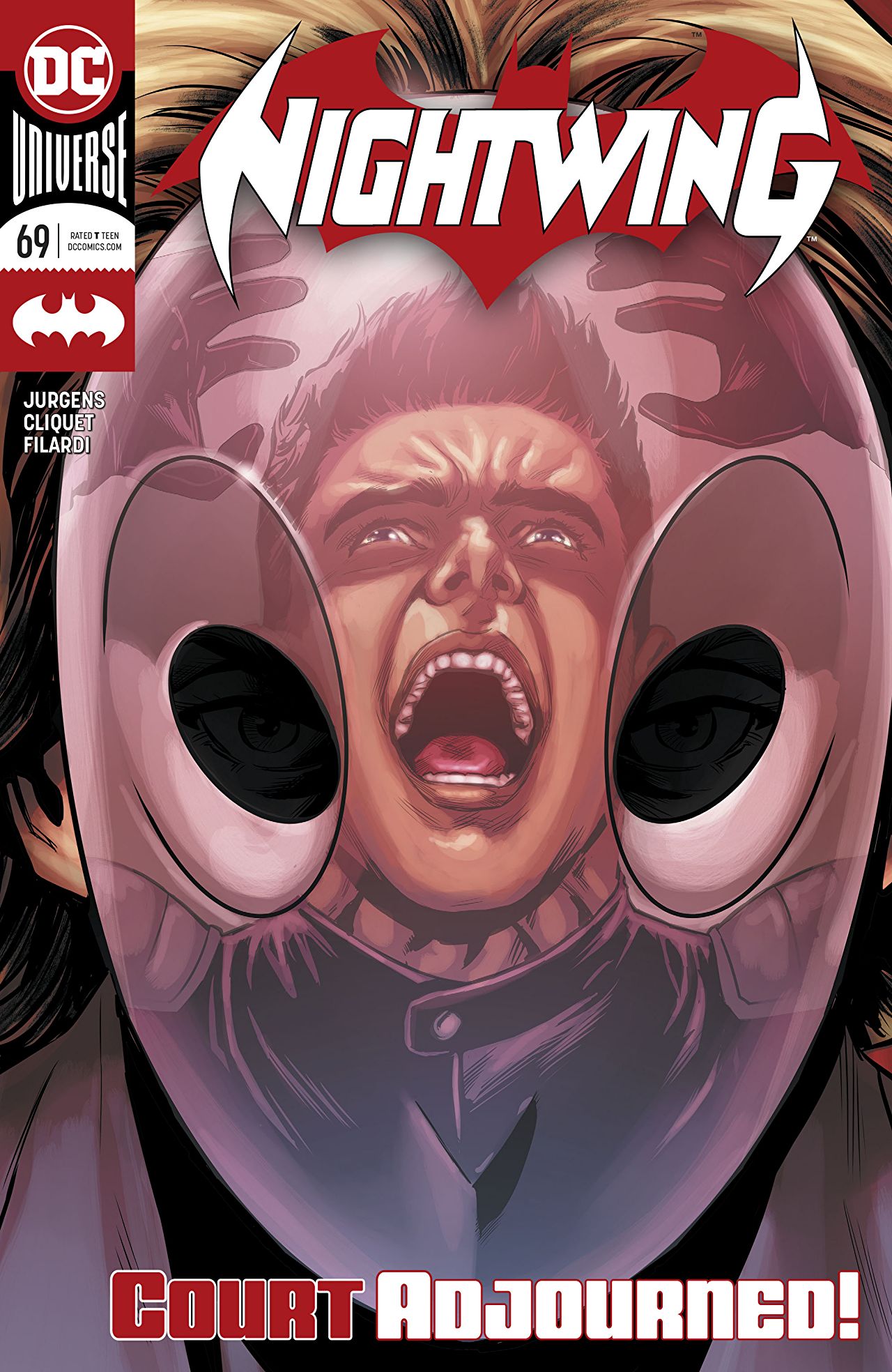 Overview: Richard Grayson goes to the source of all of his troubles, and a final battle for his mind unfolds.

Synopsis (spoilers ahead): In a derelict house in Gotham City, a news broadcast is being played. The anchor deliberates on Bludhaven, which has just begun to calm down after recent events concerning four different Nightwings. The figure watching the TV becomes very attentive.

In Zurich, Switzerland,  Ric Grayson infiltrates a castle while exposition text plays on in the panels of a conversation he had with Bea shortly before leaving Bludhaven.

Then. With his conflicting memories, Grayson decides he needs to find Dr. Haas for answers on how to set things right once more. Bea and Ric break into Dr. Haas’ office, and Grayson has another piercing headache from the returning memories; the fifth episode today. They find what Ric was looking for, the tool that seems to help his fracturing. It’s a children’s book called ‘The Very Friendly Owl.’ As he looks at it, he has another conflicting memory and throws the book in frustration. Bea, desperate to find any information that can help, rummages around Dr. Haas’ desk and finds an Owl mask. Grayson deduces that Dr. Haas must be the controller that Talon was talking about when he was introducing him into his memories, manipulating him with lies and drugs.

In Switzerland, Grayson battles his way further into the castle until he finally encounters Dr. Haas in her Court of Owls guise, protected by two Talons. As Grayson physically combats the Talons, Haas verbally spars with him, giving him the answers he seeks while still trying to pull him to the Court. She tells him that she has, indeed, been playing him in order to regain the Gray Son that the Court lost years ago and that they were only steps away thanks to her specialty, the drugs, and an item known as the Identity Crystal, which she wears around her neck. When it is exposed, Grayson falls to its hypnotic power. Haas reinforces the Court’s false past for him, but as he resists, a henchman detonates a self-destruct device, giving everyone a ten-second countdown. As the seconds fall, Haas entreats Grayson to submit to the crystal’s light and his new memories. She entreats him to become the man the Court needs him to be.

When the timer hits zero, the castle explodes. Dr. Haas hurtles into the waters below. She begs for help, and Grayson reaches for her too late, managing to only rescue the identity crystal and the only memory that counts to him – Bea. Grayson begins to journey back home to Bludhaven.

Back at the derelict house in Gotham, the newscast continues on, describing each of the four Nightwings and deliberating about their relationships with each other. The figure begins to bash the TV at the sight of them, knowing them for the posers they are. As the panel pulls back, we see that the figure is none other than the Joker!

Analysis: Richard Grayson sports a new outfit here. Whereas the previous arcs following his memory loss feature a celebration of the various Nightwing outfits when the four Nightwings debut, the suit he wears in this issue is a celebration of Dick Grayson overall. In it we see color hints of his time as Robin, his escrima sticks made famous in his guise as Nightwing, and the overall design closely parallels his tenure with Spyral.

This issue is all about the battle for his mind. He is being figuratively split in two, and it threatens to drive him insane. His only sensible recourse is to seek help from his counselor, his guide through the confusing paths of his amnesia. When her betrayal is discovered, he must search the world for her in order to find himself.

The self-destruct sequence, counting down to the demise of the Court of Owls’ castle, reflects the countdown that I believe is intended for Grayson’s own mental self-destruct. Bea had warned that he had five memory headaches in one day. He was bound to lose all capacity over himself if his memories couldn’t be resolved. When the castle exploded, breaking down the walls of the Court’s stronghold, so too was the Court’s hold of Grayson’s mind demolished. He had already pushed away the Bat-Family; now he was immune to the Owl’s advances. His life leads back to Bludhaven and to Bea.

Final Thoughts: This feels like the end of an arc, but I still feel that we don’t know who Grayson will be from now on. Obviously, he is no Talon or Owl. He also doesn’t appear to be the Dick Grayson we know and love from the Bat-Family either. It looks like we’re going to be heading in a new direction, which is fine. Bludhaven and Bea are fodder for interesting stories. I worry that we’ll be stuck wondering who this guy ultimately is. I want Dick Grayson back with all the history that comes with it. Fresh starts are great, but blank slates are unworthy of characters that have been around for decades.