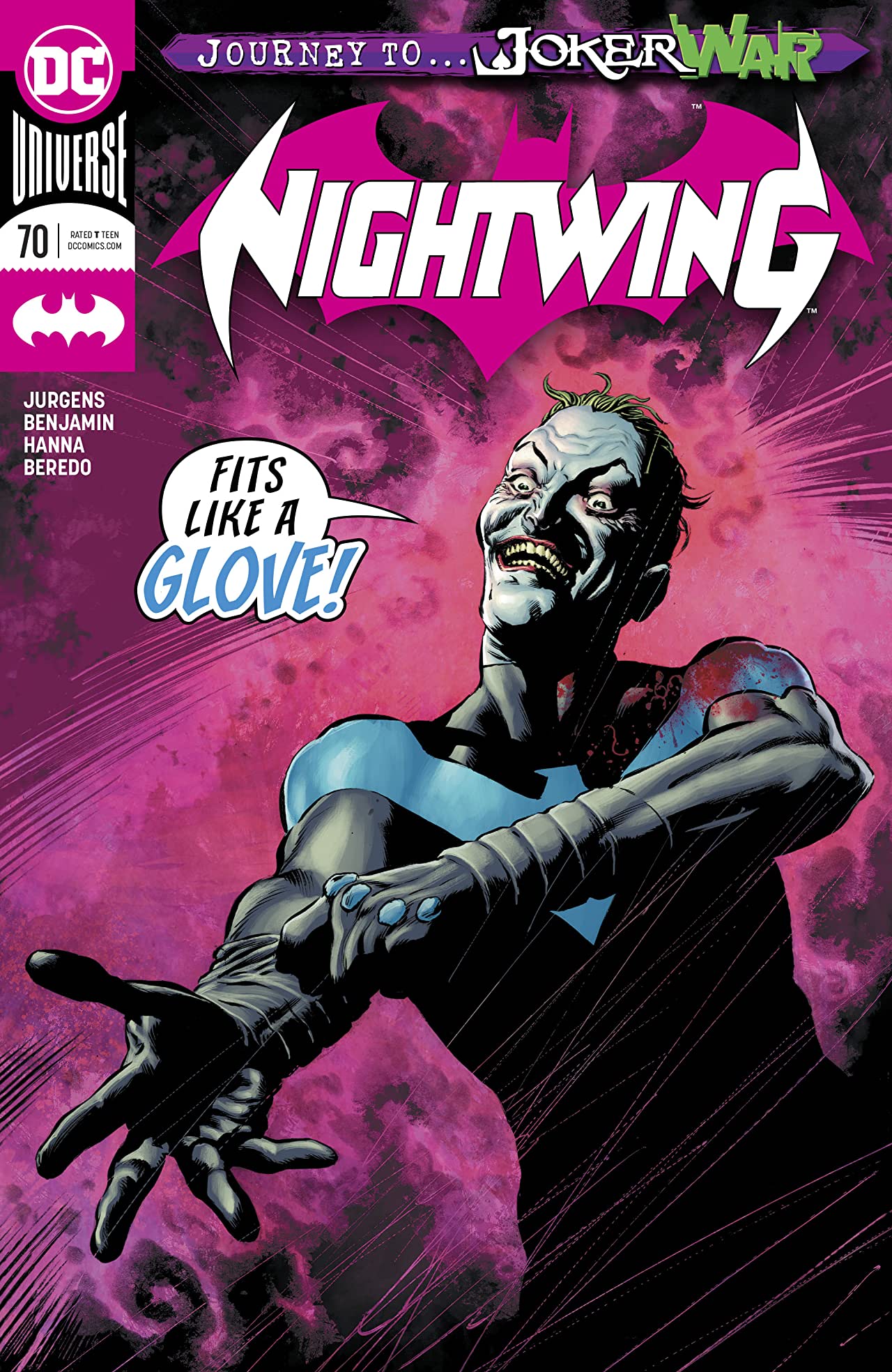 Overview: As Ric continues to fight the dual memories in his head, an old friend comes to Blüdhaven, looking for the one true Nightwing, by any and all means.

Synopsis (spoilers ahead): As he flies through the sky, Ric ponders over the recent events and the dual, combating memories in his head.  As he looks at the Identity Crystal that was taken from Dr. Haas before she died, going over the events since being shot by the KGBeast, he decides he’s determined to find out which life is the real one. And this time, he’s going to make it stick.

Back at Blüdhaven General, Hutch and Colleen are going over their own thoughts recently leading to Talon Ric’s attack on the team. Colleen is thinking of hanging up her costume. Hutch, on the other hand, doesn’t agree. Before he can get his reasoning in, Zak wakes up and backs his sister. He talks about how it was Ric in the Talon suit that attacked them. Hutch explains how Ric was brainwashed by Haas and how he came through in time to take Talon down before he could do any more damage. He feels they need to be out there looking for Talon. Sapienza, who isn’t at the hospital, is obsessed with making it work. Hutch knows that he’s out there looking for Talon.

Sapienza flies through the skies of Blüdhaven looking for Talon. He hears over the police scanner that there are people down due to stabbings at a local bar that’s been closed for years. Since it’s a stabbing event, he’s expecting to find Talon there. As he investigates the crime scene, he realizes he not alone. He demands Talon to surrender. He’s instead attacked by the Joker. He wants to know where the real Nightwing is. As this is going on, Ric is rescuing someone from getting killed. As the rescued guy takes off, another headache attack hits Ric and he thrives in pain.

The guy Ric rescued (named Slappy) is still fleeing the scene when he runs into a mysterious guy dressed in purple. He asks Slappy about the guy who rescued him from meeting his demise. Slappy doesn’t recognize his hero, but he theorizes that it is one of the new Nightwings that have been patrolling the city. He claims the reports are saying that Nightwing is dead. The man in purple (the Joker) doesn’t believe the story and as he gives Slappy pep talk and slaps a cigar in his mouth. As he walks off, the cigar blows up in Slappy’s mouth.

Back at the bar, Bea hears a noise upstairs in the apartment as she tries to clean the bar. As she makes it upstairs, baseball bat in hand, she finds Ric kneeling on the floor writhing in pain. He tells her the conflicting memories are getting worse and that it’s getting hard for him to take it. As she offers some aspirin, Bea asks Ric if it would be a good idea to call Barbara. Ric doesn’t trust her yet. Before heading downstairs, Ric hangs the Identity Crystal on a chair.

A few minutes later, a figure climbs through a window in the apartment. The issue ends with the Joker holding the Identity Crystal in hand, pondering his next step.

Analysis: So I’ve been off and on reading Nightwing ever since Dick Grayson became Ric Grayson because it hasn’t been a good story and it has gone on for way too long. But, as current readers have seen, it seems we are getting closer to the return of Dick Grayson. And that has made Nightwing more interesting to read. That continues this issue as we see Ric suffer more from the conflicting memories in his head. But we see things are slowly coming to an end as Ric wants to make that memory – the right memory – stick. While I always thought the storyline of having multiple memories is an odd one, particularly how it came to light in the last annual, the fact that it’s being used to bring about the end of the Ric Grayson story allows me to tolerate it. If nothing else, I want Dick Grayson back so that Dan Jurgens can stop telling us how we got here at the beginning of each issue.

Last issue, we got another cameo by the Joker. This issue, however, we see Batman’s favorite fiend in full Joker glory. What are his plans for Ric and what does the Identity Stone have to do with it? I won’t spoil it for anyone who hasn’t read the upcoming solicits. However, the Joker’s plans and Nightwing’s role in Joker War makes this a book – good writing or bad – that I will continue to follow.

So a little on the art, if you’ve heard my comments on the TBU Comic Podcast in the past about previous art on Nightwing, you would now that I’ve been less than impressed with it. I can’t say that now. I really like the work the Ryan Benjamin and Scott Hanna put together. And while I am ready for Dick to return to his traditional Nightwing costume, Ric doesn’t look bad in his red, white, and blue.

Final Thoughts: It’s almost over guys. We have received hint after hint that Dick Grayson would be returning and the light at the end of the tunnel is becoming brighter for us AND for Richard (Dick) Grayson. My only hope is that he doesn’t lose Bea to make his return (wishful thinking there).