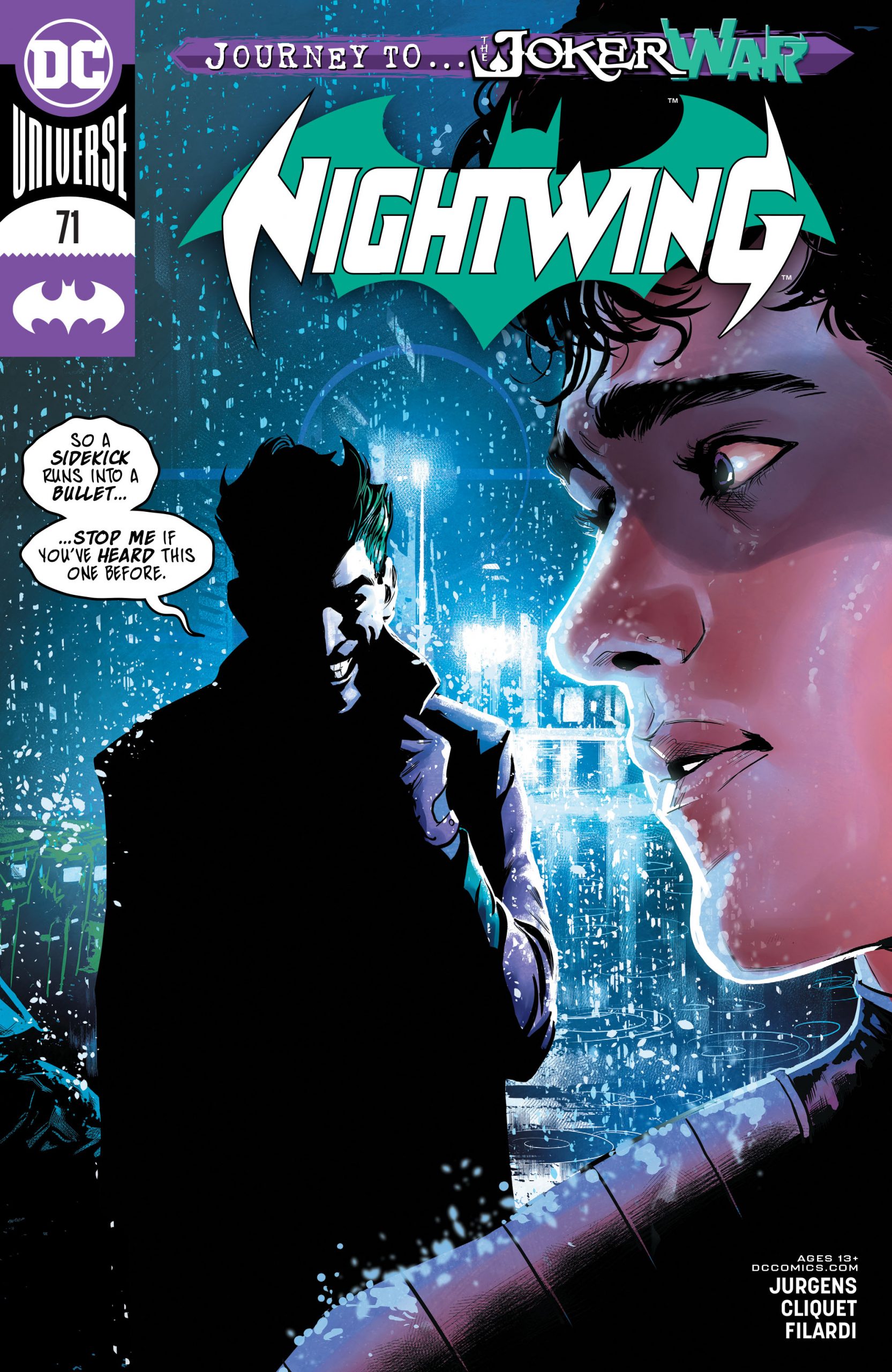 Overview: The Joker comes to Blüdhaven, and Nightwing’s “true” origin is finally revealed to Ric Grayson.

Synopsis (spoilers ahead): “War for the Mind!” begins in the Prodigal Bar in Blüdhaven. Bea is concerned about Ric. His headaches are getting worse, and he needs help. Ric muses that it is hard to find a doctor when the previous one betrayed him and then he tells her that she is the only help he needs. Their conversation is interrupted by sirens. Bea tries to get Ric to ignore them, saying it is time that he takes care of himself. Ric says he agrees but only after making sure everything is okay. He rushes out saying that he will be right back.

Bea verbally muses whatever is she going to do with him, but her musings are interrupted. A mystery person says the real question is what will this person do with her.

The scene shifts to the streets, as a monster named Tusk is attacking a group of cops. These cops are working on tracking down all the prison escapees, and Tusk is the last one. One cop calls Tusk a freak, and that sets Tusk off. Tusk throws the cop he was holding at the other officers. The encounter gets even more heated, and we see that Ric has changed into his hero uniform complete with a cloth mask this time, instead of the grease he has been covering his eyes with before. Ric thinks that he may have seen Tusk before, but he is not so sure. Ric draws his escrima sticks and the two face off. Tusk grabs Ric and smashes him onto the hood of the police cruiser. Ric gouges one of Tusk’s eyes, and Tusk smacks him away. Ric falls hard into a large vehicle and sees a joker card lodged into the tire.

At Blüdhaven Hospital, Detective Colleen Edwards barges into the operating room. She is there to find Detective Alphonse Sapienza. She wants to know how he got injured. Unfortunately, the anesthetic has started and Sap struggles to get out that it was the Joker. Edwards is forced out of the room as the crash cart is brought in.

Ric, still looking at the card, thinks that he has met the Joker and maybe even fought him. Ric throws the card at Tusk and slashes his other eye, which gives him the opening to bring the brute down.

Back at the bar, the mystery man comes down the steps saying that he is a friend that is there to help. Bea reaches for a bat and hides it behind her back as we see the Joker wearing the tattered and bloody shirt of Nightwing and carrying a crowbar. Ric jumps from the stairwell, and Joker knocks him, down claiming that he is there to help. Ric notices the shirt and asks what the Joker did to Sap. Joker says that he was dealing with the impostor and affirms that he is here to help. He can tell Ric about his parents, their life and death, and Bruce Wayne. Ric asks how the Joker found him, and the clown responds that he has always known. Ric says that he is fine, and Joker says that with the phony memories of the Owls in his head, he is not fine. Bea swings her bat at Joker, and he blocks it with the crowbar. If Ric does not have a civil conversation with him, Joker is going to kill Bea.

Joker says that he can remove the memories that the Owls and Talon forced into Ric’s head. He can make Ric into Richard Grayson again. Joker then produces the memory crystal Dr. Haas used on Ric. As Ric reaches for it, Joker holds it away, and we see colors surround both of them. Joker asks Ric his name, Ric says “Ric.” Joker calls him “Dicky Boy,” and Ric introduces himself as “Dicky Boy.” It appears that Grayson is hypnotized, and Joker tells Ric to listen. Joker wants to tell him about a little boy whose parents died in a circus. This boy was taken in by a very nice man with green hair and white skin, and that man raised the boy to be his own.

Analysis: This issue, we learn what the Joker’s plan is. It appears that he wants to mess further with Dick Grayson and now implant a third version of his life, a version that stars the Joker. It looks like Joker knows that Bruce Wayne is Batman, even telling Bea that he is an expert of all things Batman. This is a plan to mess with Bruce’s emotions and inflict a wound on Batman.

The reveal that it was the Joker fell flat. It was pretty obvious that the man coming down the steps was the Joker despite the attempts to have him emerging from the shadows to reveal himself smile and all. Once again, ever since The Death in the Family story, the choice weapon when dealing with the Robins is the crowbar.

I liked the art in this. Joker particularly looked menacing. The chief complaint I have is the drawing of the wounded Sap. The art seemed to be flat, and the wounds looked like they were on top of his face instead of causing his face to swell.

The cliffhanger at the end definitely makes me want to continue and find out what happens next. Is this the story that will lead to the return of Dick Grayson as Nightwing?

Final Thoughts: There was a good mix of action and intrigue even though the Joker’s reveal felt flat for me.