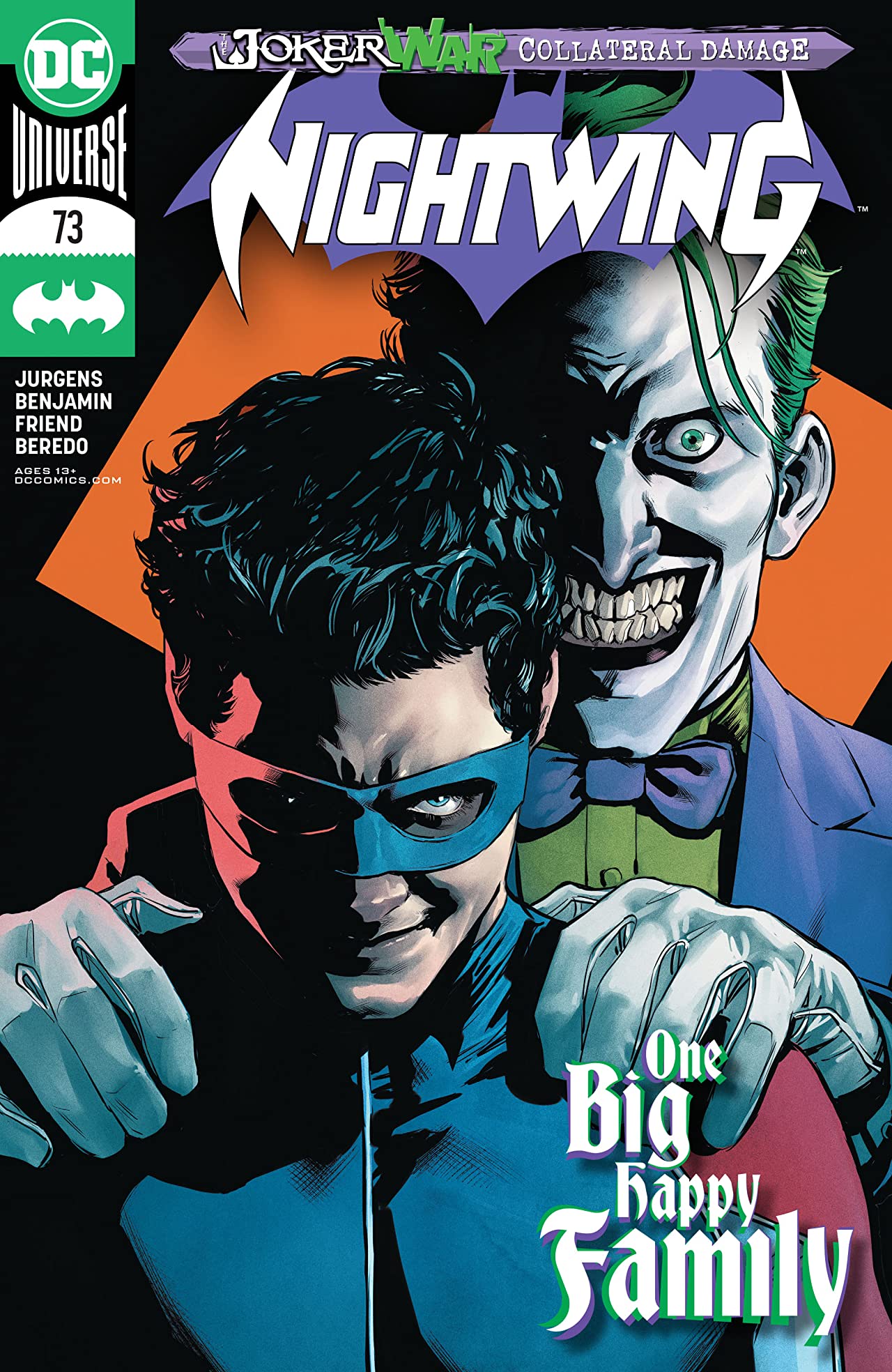 Overview: Batgirl squares off with a brainwashed Dick Grayson.

Synopsis (spoilers ahead): The scene is Gotham City. We see Batgirl tied to a pole. It appears that she is waking up after Dick knocked her out at the end of the previous issue. She remembers that Dick did this to her, but she does not understand how he could do this to her. We pan out and see that she is tied in what looks like a wrestling ring surrounded by a cage. Hanging above the cage is Nightwing’s costume. The Joker’s henchmen are around the ring yelling to fight.

The scene shifts to Dick Grayson. He is jumping rooftops and mulling over his own “thoughts.” Dick is “remembering” that he loves fight night. It reminds him of his birth parents, who were cruel to him and beat him on a regular basis. They were drunks and druggies, and they were bad trapeze artists.  He “remembers” that when they died, he was so happy. Their murderer was the Joker who would become Dick’s mentor and guide. Joker approaches Dick and says that their audience is waiting; Dick should go, and Joker will meet them there. Dick, with a smile on his face, says, “Yes, Father.”

Dick further reflects on his “upbringing.” Joker taught him to never depend on anyone and the value of knowing how to steal, plunder, murder, and raise hell in general. We see Dick approach the cage with Batgirl in the center. Punchline asks Dick if he is ready to get down and dirty. She knocks on the door, and Joker comes out as the master of ceremonies to Fight Night. In one corner is Batgirl and the other will be Dicky Boy. The goons chant “Dicky Boy.”  Barbara remembers the crystal that Bea told her about and realizes that Joker has total control of Dick. Joker is seen still wearing the crystal around his neck.

The bell is rung. Dick now in the cage and approaching the seemingly helpless Batgirl. Dick charges at her. Batgirl realizes that he is Batman’s equal, but the brainwashing is making Dick sluggish. Batgirl demonstrates her own skills by kicking Dick when he approaches her. She spent years having to operate without her legs; she had to be resourceful and she has gloves with razor-sharp epaulets. Batgirl cuts the ropes binding her wrists, freeing her and allowing her to better fight.  Dick uses one of his batons to hit Barbara on the side of her head. Joker is almost in tears with pride. We hear that his plan is to knock off each member of the Bat-Family leaving only Batman left. The fight continues, and Barbara tries to get through to Dick in telling him that Joker is controlling him.  Punchline then talks to Joker about Alfred and the Alfred Pennyworth Children’s Hospital. Joker sends her to attack the hospital while he stays and watches the fight.

The fight between Batgirl and Dick continues. Dick accuses her and the Bat-Family of persecuting the Joker Family for years. Barbara is able to take one of Dick’s batons and take the offensive. She tells Dick that he was the first and best Robin, he built the Teen Titans and now he is Nightwing, reminding him about the suit hanging over the cage.  She tells him that a bullet tore through the side of his head and since then he has been victimized by people trying to control him. She pleads with him to be the man he really is. During this exchange, we see Dick, and it looks like she might be getting through to him.

Punchline and a couple of goons are seen in the electrical room of the hospital. Punchline takes a speaker taken from Barbara’s belt and calls the guys, presumably the Robins, using Batgirl’s voice.  She tells them that the Joker is at the Children’s Hospital with a bomb and then abruptly signs off, making it sound like Batgirl is being attacked. We hear that Tim Drake has heard the transmission and is on his way. Punchline tells the goons to take positions.

Back at the fight, Dick says that he thinks he knows what Barbara is trying to tell him. She urges him to keep trying to remember. Dick tells her that he is back. Barbara is pleased, but she thinks that it might be too easy. Dick tries to punch Barbara, and Barbara smacks Dick’s face with her baton. Joker lets it out that the Pennyworth Children’s Hospital is in danger. Batgirl, who was only staying there to try to get Dick to remember, jumps out of the cage and heads to the hospital. The goons watching urge Dick to pursue her, but Joker, now in the cage, tells Dick that he is playing the game wrong. Joker tells Dick that he can get three kills for the price of one.

Several blocks away, we see Red Robin landing on a rooftop, and he is met by Red Hood. Both of them heard the call, but Red Hood thinks that the call was off. Red Hood’s thought is finished by Dick Grayson saying that it is a set up orchestrated by the Joker. Tim thinks Dick is back, and Dick tells them that Joker brainwashed Barbara to bomb the hospital.

Analysis: This is basically a fight issue, which I normally get pretty bored with but not so much here. I like that we learn more about what the Joker’s plan is. However, I do not like the plan. The plan is mainly to eliminate the Bat-Family, which we have seen before in stories like Death of the Family. This retread is a negative for me. I did like being in Barbara’s head throughout the ordeal though. We see her respect for Dick’s skills as well as her pain that he is putting her through. We also get a little inside Dick’s head and see what lies the Joker has fed him, which is very extensive and detailed. It’s everything from Dick’s parents being abusive to him to being saved and mentored by the Joker. I also liked the action during the fight, especially seeing Barbara unleashing her attack on Dick in the end.

The art here is passable. I liked the art during the fight and the “flashbacks,” but I was not that impressed with the art in the end when we see Red Robin and Red Hood. Red Robin looks off, and Red Hood looks like he is missing part of his mask. When Dick tells the two about Barbara being brainwashed, he has a smile on his face, which looks out of place, especially when he is suggesting that they may have to kill Barbara.

Final Thoughts: The action is compelling, and there is a nice setup for conflict in the next issue, especially with Nightwing teaming up with Red Hood and Red Robin to take down Batgirl.