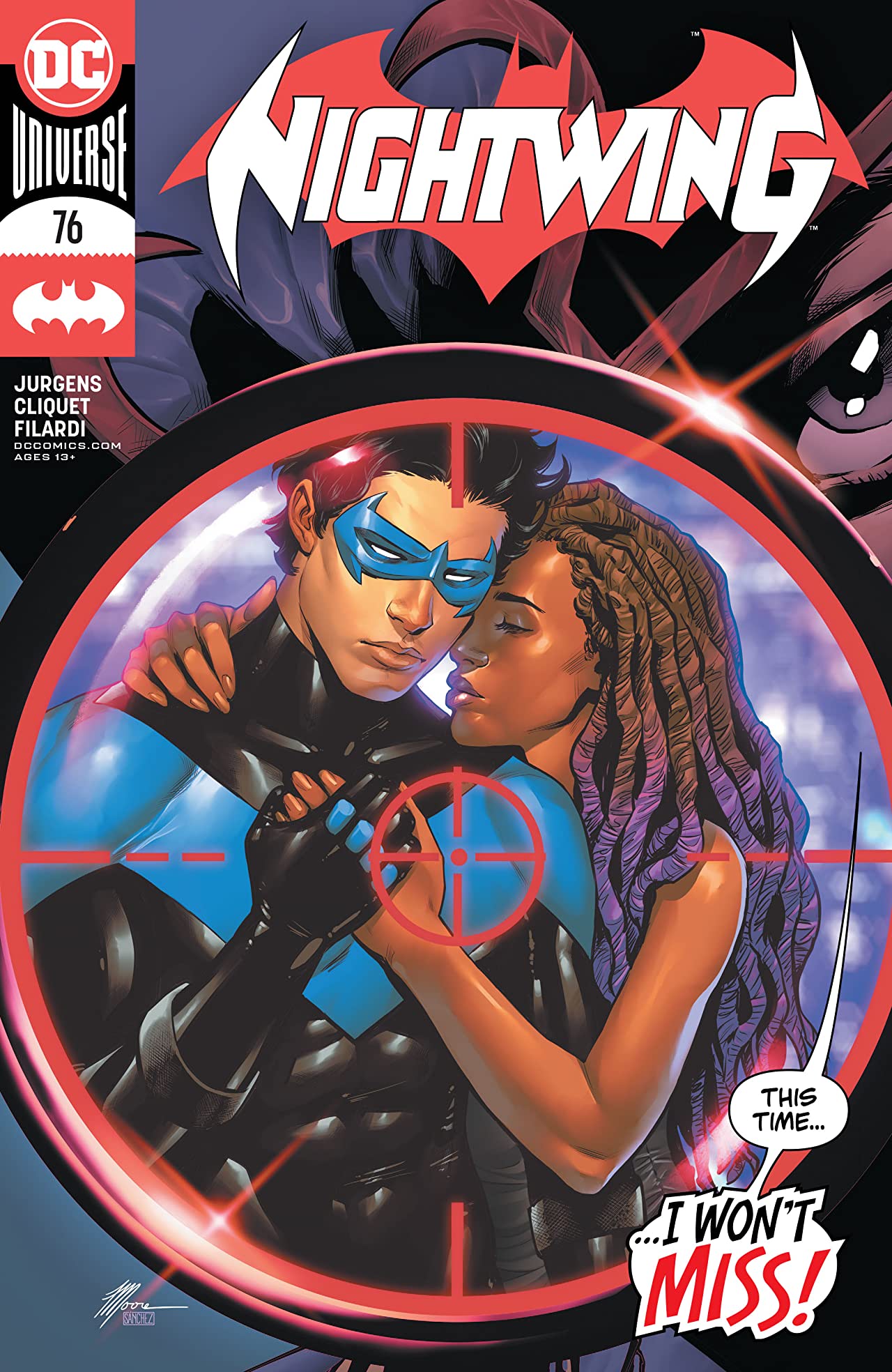 Overview: Nightwing and KGBeast have their showdown, and the fate of Dick’s relationship with Bea hangs in the balance.

Synopsis (spoilers ahead): This issue begins with a flashback to Batman #55, when KGBeast shot Nightwing and changed Dick Grayson’s life for several months.

In the present, KGBeast is holding Bea with a gun aimed at her head. Dick tries to talk KGBeast into firing on him instead of Bea. Bea takes things into her own hands and elbows the Beast in the head. She then pushes his gun away as he fires. KGBeast knocks Bea over, but it gives Nightwing the chance he needs and attacks. He fights to protect Bea.

Nightwing takes the fight outside and mocks Beast, saying that KGBeast attacks as a sniper because he is afraid. Bea looks on, realizing that Dick Grayson is different, possibly from another world. It’s then that she recognizes that she is seeing Dick Grayson for the first time. She is seeing his life as a mission and a calling.

Dick is taking the upper hand when Beast changes his weapon to fire a max caliber dispersal grenade. Nightwing throws his baton and blocks the grenade launcher muzzle, and it blows on KGBeast. The fight is over. Nightwing tears off his sleeve and applies a tourniquet on KGBeast’s leg to stop the bleeding. KGBeast says that he will kill Nightwing, and Nightwing replies that he will be waiting. Rescue arrives in the form of Hutch. Nightwing admits to Hutch that he is okay if Hutch branches out provided it is what Blüdhaven needs and if Hutch really trains for it.

Nightwing admits to himself that when he shattered the memory crystal his memories of Bea were cloudy but now they are clear. He loves her, but he is afraid for her. The two walk off, and Dick remembers his prior conversation with Batman when he said that they cannot have a normal and happy life. Dick is now starting to believe Bruce.

Bea hopes to return to their previous life. Dick lies to her and says that he remembers them as a couple. When he was Ric, he was completely different. That man no longer exists. Bea starts crying, and Dick suggests that they be friends. This enrages Bea, and she pushes away from Dick, saying that she does not want to see or hear from him again. Dick thinks that he can stop this, but he cannot. He now completely buys into Batman’s philosophy. Nightwing removes his mask, wipes his eyes, then replaces his mask, and jumps to the next roof.

Analysis: I did not enjoy this issue. I am disappointed that the writers have decided to continue with the adage that the hero cannot be happy, and in order to protect the ones they love, heroes have to resort to lying and pushing those loved ones away.

The redeeming part of this story is the fight. Nightwing was completely on his game and easily handled KGBeast, who I do not believe is a great hand-to-hand combatant. Instead, Beast prefers to rely on his guns.

The art was good. I enjoyed the feel of the background and setting during the fight, and the characters (except for Hutch) were drawn well. I really did not recognize Hutch when he arrived on the scene.

Final Thoughts: The abrupt ending to what I thought would be a positive relationship really brought this issue down for me. Let’s have our heroes stop brooding and be happy and successful for once, please.