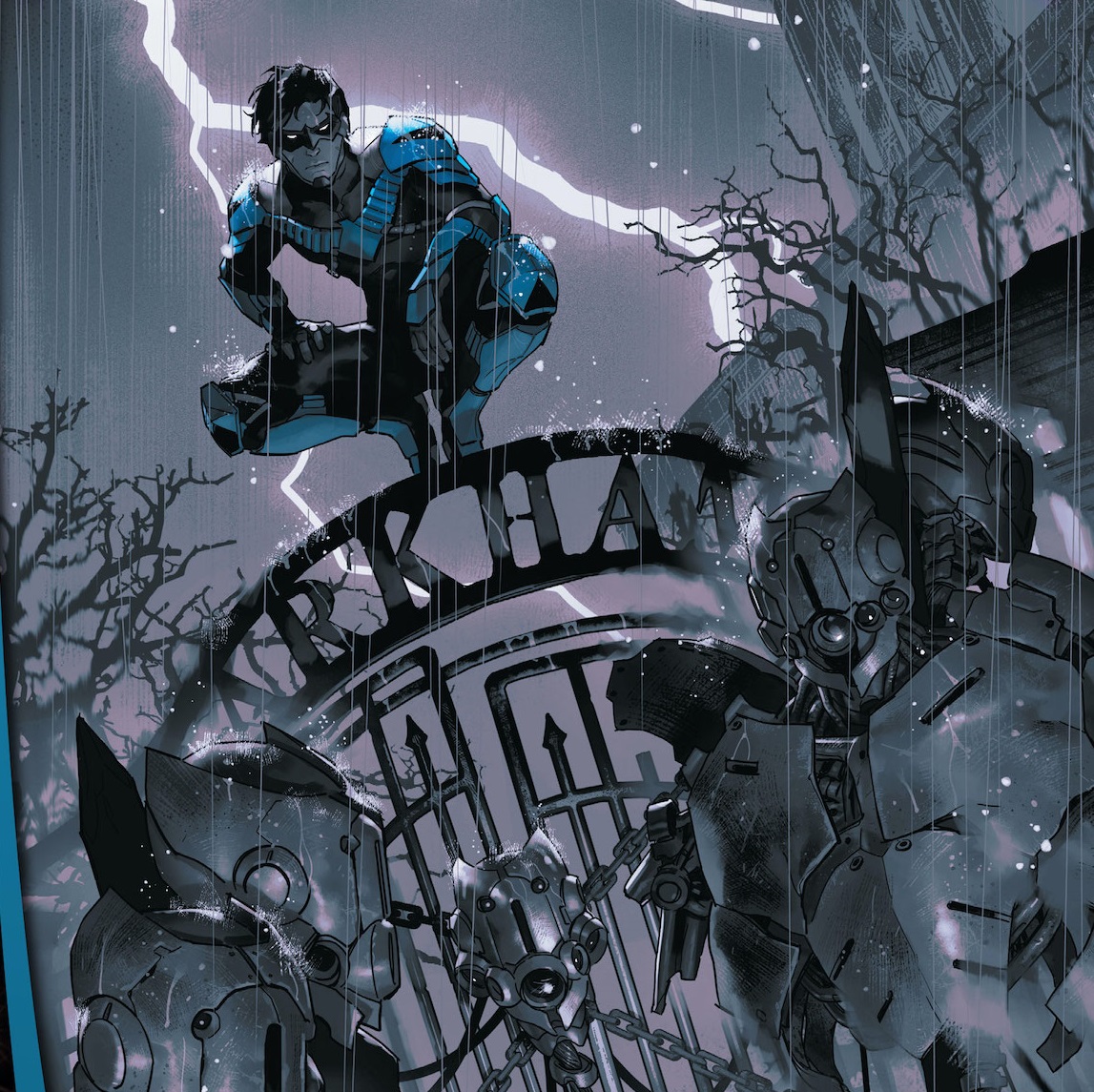 Overview: In the near future, Gotham is run by the Magistrate and Nightwing is the leader of the resistance.

Synopsis (spoilers ahead): “Once Upon a Night in Gotham” opens in Gotham several years from now.  It is the aftermath of the events of Death Metal and Gotham has changed.  There are wanted posters everywhere.  We hear audio apparently from a monitor that someone is coming in hard but it needs to be sold more.  A young couple is being menaced and a hero arrives.  Nightwing has arrived and from the looks of it, he is the wanted man.

As Nightwing arrives one of robotic beings grabs the throat of the man as the woman screams.  The being says that this is a legal order and we hear that mask impact is imminent just as Nightwing lands on the robot.  The other robot identifies Nightwing as a criminal and lethal force is authorized.  We start to hear what he is wanted for, but Nightwing throws his batons at the robot and says that he is wanted for a lot.  He hits the robot in the head.  Now both robots have been destroyed.

The man goes to shake Nightwing’s hand but he throws his baton and hits the man under his chin. Nightwing says that the body language is all wrong.  The couple was never scared, instead they are ready to pounce.  The Magistrate was going automated, meaning the robots, but some cases require a human touch.  The man says that he is an augmented human and attacks.  Nightwing easily knocks him out and turns towards the wife.  She pulls out two knives and attacks Nightwing.  During this fight Nightwing is hit from behind and as he goes don, he sweeps the woman’s feet out from under her knocking her out as well.

We meet Peacekeeper-01 and Captain Marks at Magistrate headquarters in Gotham.  Marks reports that Nightwing is hooked.  The Magistrate is being extra careful with Nightwing because he was the Bat’s right hand man.  Marks was promoted to Peacekeeper-06 and 01 warns her that the promotion can be yanked from her grasp just like the previous 06.  The goal is to end the mask threat and give Gotham its freedom and give the city back to the correct people.  Nightwing however has too much support, attention, and success.  An example must be made of him.  Nightwing believes that the Magistrate killed Batman.  Throughout this conversation, we see that 01 is holding the desk name plate Commissioner Montoya.  During this conversation, 01 snaps the plate in half.

The scene shifts to the ruins of Arkham Asylum.  Nightwing enters and at a computer contacts a group of masks including Batgirl, Bluebird, Two-Face, and more. Nightwing warns them that the Magistrate is coming but they are the legacy of Batman.  They will fight until they win.  Batgirl reports that there are reports all over Gotham of a Batman working.  Nightwing says that there will only be one Batman but he will look into it personally.  He signs off thanking Babs.  He tells the others to get some rest.

In the shower, Nightwing wonders how many more masks will be hurt, tortured, and killed.  He forces him to relax and remembers the circus when he first met Bruce Wayne.  Nightwing fears that he was not there for Bruce when he needed him and now he is gone.  Dick is interrupted, he feels that someone is coming.  He leaves the shower and grabs the arm of someone else.  The two wrestle but the visitor says that they need to talk.  The stranger identifies himself as Batman.  Dick has the automated defense welcome the guest with maximum voltage, knocking the “Batman” down.

Twenty minutes later Batman is strapped to a chair.  The Batman asks Nightwing, now in full costume if he looked under his mask.  Nightwing just used movement matching software to identify that this is the new Batman that everyone is reporting about.  Nightwing values privacy.  Batman admits that it was difficult finding Nightwing.  Nightwing asks this Batman what does he want.

Batman tells him that he is working on a case involving a Sarah Dowell.  She is a ten year old who was kidnapped to be shipped overseas by people smugglers.  Batman rescued her and hurt the people who needed to be hurt.  When Batman got her home, cybers from the Magistrate grabbed her to interrogate her about him.  Batman believes the girl was killed by the monsters.  Nightwing calls them much worse.  Batman wants to join the resistance.

The conversation is interrupted by the proximity alert.    Batman who escaped from the chair notices that it is a huge Magistrate contingent led by Captain Marks.  Nightwing says that she assisted Peacekeeper-01 in the murder.  Nightwing is impressed, he freed himself earlier than he expected.  Nightwing knows that when he was shot, he was tagged by a homing beacon.  Batman is surprised that Nightwing knew this and allowed it anyway.

Nightwing explains that he is tired of their death by a thousand cuts.  He is going to war on his home turf.  The siege of Arkham Assylum has begun, can Batman and Nightwing survive?

Analysis: This is a complete change to what I am used to reading in the Nightwing series.  The action as usual takes place in the dark but the feel of the story is much darker than even Nightwing’s involvement in the Joker War.

To begin with the character of Nightwing is in my opinion completely different.  He usually is the lighter member of the Bat-Family.  In this story, he is focused and determined.  He still displays his experience but there is a sharpness to his action.  For example he immediately attacks the man and woman in the beginning.  He now is showing very little trust much like his mentor.  He is ruthless in his attack and takes out the robots and the people quickly, relying on his batons more than he usually did.

He does show intelligence when he explains that he noticed the hidden body language of the couple and knew that they were never afraid like they were acting in their encounter.  He also knows that he was tagged by a homing beacon and that maybe the reason he felt the Next Batman’s presence while he was in the shower lost in his thoughts.  He was expecting visitors.  As a result, his struggle with Batman was a little longer than his previous fights.

Nightwing does show that he is still caring.  He cares about the masks that he is leading; he wants them safe and that is probably why he allowed himself to be tracked.  He wants to end this fight once and for all.

Throughout this story we get messages that Bruce may be still alive.  Nightwing believes Bruce is dead but Barbara has hope.  Dick immediately dismisses Barbara’s thought saying that there will only ever be one, which I find interesting in that Dick himself assumed the Batman mantle a couple of times himself.  He did in those outings try to create a Batman in his own image though.

The art here helps relate the darkness of the story.  The entire action takes place during one night.   We see an Arkham in ruins covered with police tape, basically asking the question what happened at Arkham to leave it in this state. I do not see any stars in the sky.  The cloud cover also enhances the darkness by having the only visible light be the artificial lights of the cars, streets, and buildings.  It is dreary in Gotham and the art shows that very well.

I like that Dick is shown at times more aged than in the regular series.  He is drawn at times battle-weary, especially noticeable in the scene where he is communicating with Batgirl.  He looks tired in how his eyes are drawn.  I think the headgear that is a part of his black not blue mask creates an older look in the character as well.

This is the only Future State book I have read so far and even though there are no editor’s boxes, there is probably continuity with at least the other Bat-Books that may flesh out the story better.  From this issue, I see the story as simple.  The Magistrate has taken over and is now hunting the masked vigilantes that inhabit Gotham.  With seeing Two-Face on the screen, there is no difference between hero and villain to the Magistrate, their aim is to take “back” Gotham and give it to those that are “worthy”.  Who are the worthy, I do not know, but it appears that there is little respect for the Gotham Police Department which the only evidence of their existence is the desk plate of Montoya which Peacekeeper-01 snaps in two, no respect for the police.

The cliffhanger makes me want to see the end of this story and I am interested in picking up the other titles and seeing what they have. Future State, for this fan, is future shock.