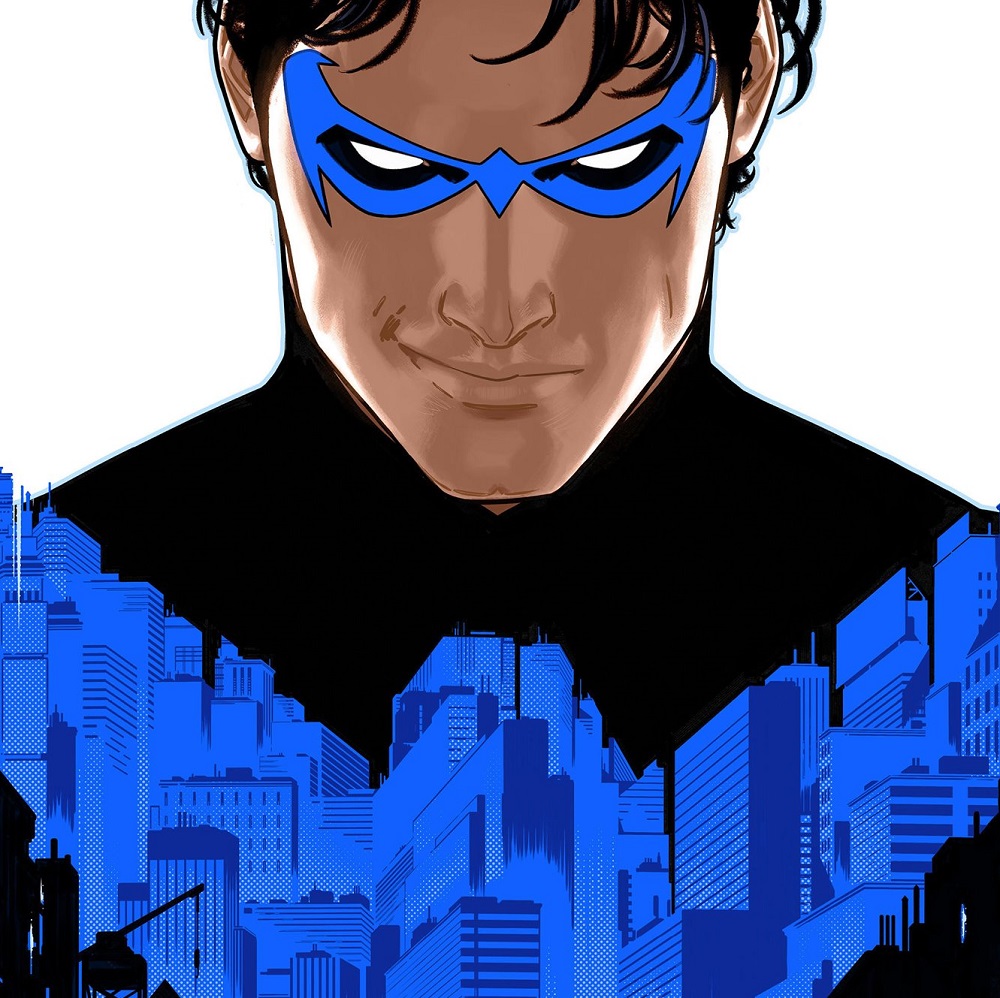 Overview: In Nightwing #78, Barbara Gordon visits Dick Grayson in Bludhaven as executor of Alfred Pennyworth’s will, and Dick reflects on lessons learned when Alfred was alive.

Synopsis (spoilers ahead): In a flashback to an incident in Gotham Heights Park, Dick Grayson recalls a time when – as a young boy – he fought off three rich bullies who were picking on a kid and a young Barbara Gordon. Barbara’s father, Detective Jim Gordon, drove Dick back to Wayne Manor, where Alfred later found him sulking as he volunteered to do Alfred’s chores, stating all he ever wants to do is help. Alfred encourages him not to let that part of his personality be deterred, to be a hero even without wearing a mask.

Fast-forward to the current day in Bludhaven. Nightwing rescues a dog getting chased and attacked by a gang of violent frat boys. Once one of them pulls a gun on the dog, Nightwing takes them down, and reaches out to take the pup. The dog bites him, so Nightwing swings off to the nearest animal shelter, thinking about the trip to the hospital for his dog bite soon after.

Meanwhile, the crime boss Roland Desmond a.k.a. Blockbuster meets with the Bludhaven mayor and the president of the City Council. His criminal operations have stagnated in business, so Blockbuster seeks to make an example and swiftly kills the mayor, leaving the Council president next in command, hinting that he’s aware of her family history. As the scene ends we learn that the woman’s name is Melinda Zucco.

As Dick returns to the apartment building he owns, he dwells on the fact that he’s running out of money. With Bruce no longer solvent, Dick worries about his finances while refusing to raise the rent in the building. Suddenly, he spots someone in his room and changes to Nightwing to get the drop on them. The tables turn as Barbara Gordon – Oracle –  provides a shoulder throw as well as points out the weaknesses in his security system.

Oracle explains the reason for her visit being that the late Alfred Pennyworth made her the executor of his will. In the event of his death, he left a note for Dick, revealing his large fortune and leaving much of it to Dick, amounting in over a billion dollars. As Dick and Babs read Alfred’s letter, a tear rolls down his cheek reading that Alfred always considered him a son.

In Upper Bludhaven, Melinda Zucco returns to her apartment where a bald woman waits for her. Explaining that she’s now the mayor, Melinda’s companion asks if she’ll be ready to deal with Dick Grayson. Melinda responds that she’s not, but she will be soon, staring at an old poster for the Flying Graysons.

Analysis: The Tom Taylor and Bruno Redondo run of Nightwing is here, arriving to much fanfare. Taylor has been making the rounds expressing his excitement to finally write the character that he kept killing off in other DC runs, such as DCeased, and while Redondo is no stranger to his writing partner, having worked together in the pages of Injustice and Suicide Squad, this is the first major in-continuity Dick Grayson that the two have done together. Having stayed away from Injustice, but catching the last few issues of their Suicide Squad run, I can recognize the synergy between the two immediately. There’s an almost Wolfman and Perez dynamic that they have, and I’m happy to say that they carry that quality of creation with this first issue in their Nightwing run.

Briefly, let’s begin by summing up where Dick’s been in the last…ten years. The original Nightwing series began in 1997 with Chuck Dixon and Scott McDaniel and ended with issue #153 during the Late Rites run after Bruce was presumed dead from the events in Batman: RIP and Final Crisis. Dick became Batman for two years, then returned to the role with a red costume during the New 52 in 2011. Much of his history had been altered, from the relationship with Bruce in being both older, Robin for a far shorter time, and not even adopted, to his Teen Titans history being murky from the on-set. Even with a fresh coat of paint as Agent 37 in the pages of the Tom King/Tim Seely book Grayson, his history was kept somewhat sparse in the details aside from vague references to his relationships with the Bat-Family and Starfire. Later in Rebirth, Dick returns to Bludhaven (for the first time..?) in a redux of the Dixon and Scott run, until Tom King had KGBeast shoot him in the head, followed by two more years of an amnesiac “Ric Grayson” chasing four police officers in his various Nightwing costumes. That most recent run was not well received, although the writing by Dan Jurgens kept it being moderately decent. It was an idea that went on too long, serving as a leftover tangent from the Dan Didio era, which seemingly sought to keep Dick Grayson from recognizability for as long as possible.

But with this issue #78 (vol.4), we have a real return to what I feel is classic Nightwing. It’s apparent with the logo, which gets rid of the Batman insignia in the background of the Nightwing text, signifying that Dick is and always has been his own man. But what’s more shrewd I feel is how Taylor and Redondo illustrate Dick. A far too easy move would be to show Nightwing cracking wise and making jokes all throughout the issue, but these guys have clearly read the character before. Dick has a wide range of emotions and moods, and starting off with a flashback to his junior Robin days fighting bullies, followed up by him as an adult Nightwing doing the same is a great introduction. He’s not angsty, he’s not overly violent, but he’s not flippant either. He’s heroic. It may seem simple, but it’s the key to the Dick Grayson character. He is the best of the DC Universe, and the opening scenes show it.

Redondo also has him looking like Dick Grayson, and this is harder for me to put my finger on. There’s an Eduardo Barreto quality to his face, infused with the more modern Dixon-era style with his hair. But you just see him and can’t mistake him for anyone else. The same goes for the young Dick scenes, having him look like a perfectly rendered young Robin.

I like this issue quite a bit, but while the spirit easily captures the best of the Dixon era, the plot is also a bit too familiar with it as well. Alfred being revealed as rich makes sense, and leaving his fortune with Dick is logical too, but Dick receiving a fortune from a dead parent happened before when Lucius Fox revealed that Dick’s parents left him their savings, making him nearly wealthy. It also solves a few too many problems he was worried about in the middle of the book. I hope the next issue spends more time on how he’ll utilize his money.

Also, and this is a consistent bugbear of mine, but Barbara Gordon shouldn’t be the same age or younger than Dick Grayson. She was in college when she first met Dick as Batgirl, so anytime I see retroactive writing that implies otherwise, it bugs me. I understand that the Batman: The Animated Series played it less clear with the two going to the same school, but it’s still distonal with large swaths of continuity. For Barbara’s character in this story, she was great. It’s another welcome return to the Dixon era with Oracle being a main supporting character, and as someone cursed with being subjected to much of the post-New 52 writings of Batgirl, it was pleasant to see the two characters not sniping at each other. A sweet detail is in Babs putting her arms around Dick as he reads Alfred’s letter. The banter between the two is great. They were trading shots but also playful and not resentful. I hope it stays this way.

Finally, while Blockbuster had already been reintroduced, the daughter of Tony Zucco was – again – a plot point during Kyle Higgins’ New 52 run. That was less than ten years ago, so I’m surprised we’re doing the same thing again, but at least this one seems villainous, so it’s different enough..? Shout out to Redondo for the Flying Graysons poster, which is specifically from Robin Annual #4 “Robin Year One,” which opens with that exact same image of the Grayson family and is a favorite retelling of Dick’s origin of mine.

Nightwing #78 is not perfect, but this first issue brings a ton of goodwill into the run. Here's to what I hope will be a promising future for Dick Grayson. It's great to see him back in action.