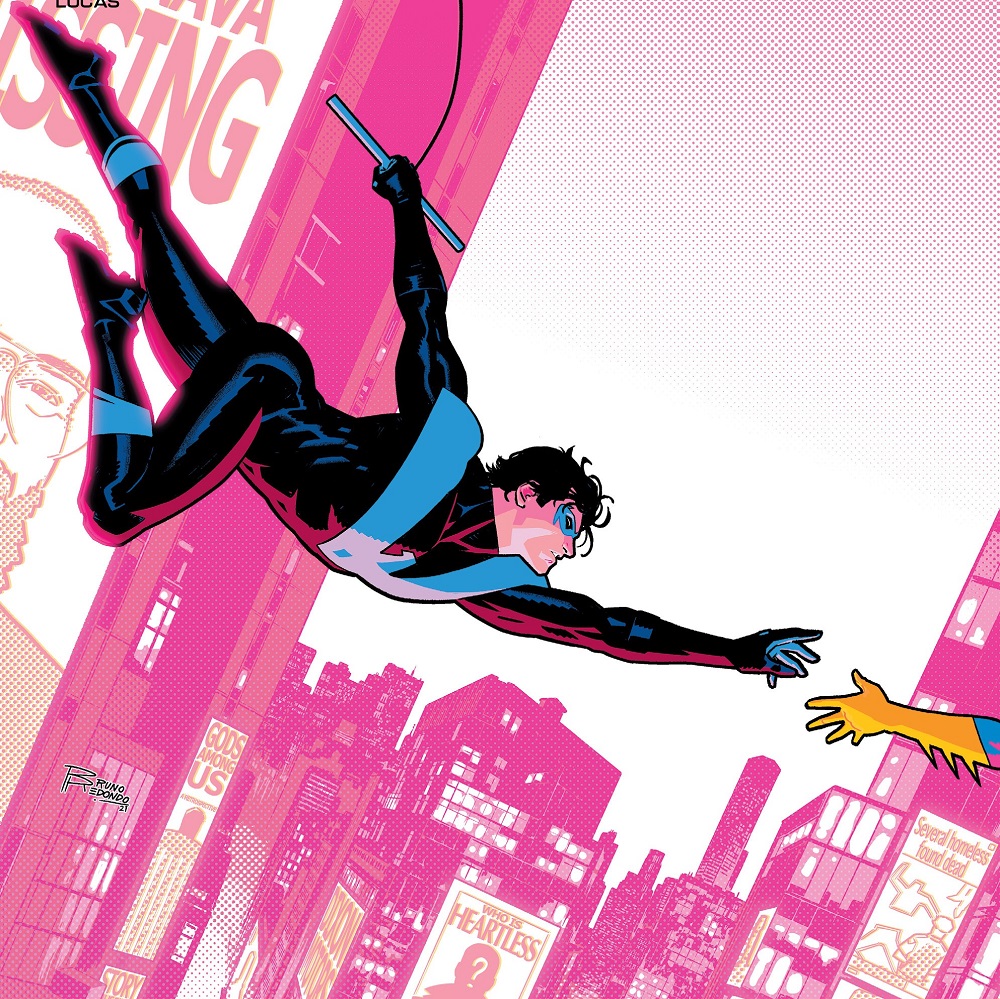 Overview: In Nightwing #79, Dick Grayson and Barbara Gordon go into the city while discussing how Nightwing can use his new fortune to help the citizens of Bludhaven.

Synopsis (spoilers ahead): Nightwing #79 starts with Dick Grayson looking back on his life, thinking about how he’s never been afraid to leap into the void because he always had a support network of friends and family to help him. That thought stays with Dick as he and Barbara Gordon go into the city to grab a bite of pizza. Babs has to remind Dick that he’s a billionaire, prompting Dick to admit that he’s struggling to find the proper use of his fortune, noting that he often thought Bruce could have always done more with the Wayne fortune.

After being approached by a homeless man and his son, Dick gets the sudden idea to buy out the failing restaurant Marv & George’s Pizza, feeding as many less-than-well-off folks as there is to go around. Feeling good, Dick then realizes that some kids stole his wallet. He tracks them down as Nightwing while Babs backs him up over an earpiece as Oracle. Nightwing spots Boss Maroni and prevents the kids from getting killed when they try robbing the notorious crime boss. He follows the kids until he ends up at a tent city where dozens of underaged children gather for shelter.

Exhausted, Nightwing returns to Oracle and announces that he has decided on how to spend his newfound fortune. Unbeknownst to him, a mysterious figure has ripped out the heart of the homeless man Dick ran into earlier.

Analysis: Nightwing #79 feels very much like the last issue, to the point where I wonder if the two could’ve been combined into a single issue. That’s a common criticism for modern comics of the past…twenty years, and I’m not even complaining all that much. Like last time, Tom Taylor knows exactly how to pitch Dick’s persona, his sense of responsibility, and humor. Much of this story has him feeling down in the dumps, but when Barbara mentions Bruce, Dick can’t help but get a snide remark in at his former partner. The rhythm of characterization flows expertly throughout, to where if I had any lingering doubts on Taylor’s handling of Nightwing, they are dead and buried.

I liked how this began with a quick recap of Dick’s history, from the Flying Graysons, to Robin, to the Titans to his current eldest brother member of the Bat-Family. I’m always happy to have his classic Robin costume re-confirmed (I really, really did not like the New 52 suit), and although Bruce firing him isn’t my favorite explanation of his leaving Gotham, that it canonically the most recent version, whether it be from Post Crisis or Nightwing Year One. But Taylor’s shrewd in ending Dick’s thoughts of friends and family with a present-tense view of Barbara alongside the caption “Someone who makes us feel safe.” This could very well be yet another DC Comics tease towards a fan-favorite coupling that the company has been dead-set against for over fifteen years, but it’s solid writing. We also get some fun stuff like the Bat-Family group chat. I’m sure I’m not the only one dying to see exactly who gets to be in the chat, but I’m thrilled to know that aside from Dick and Babs, the confirmed third is Cassandra Cain (woot!).

Bruno Redondo’s artwork made a bigger impression on me in Nightwing #79 compared to the last issue. I praised it last time, but here I liked more of the subtle nuances and anime touches. For one, I only caught the “Marv and George’s Pizza” reference the second time, including appearances from Nightwing’s creators in the panels. There’s also a nod – or coincidence – to The New Batman Adventures in the scene where a shirtless Dick reveals the hidden panel with his Nightwing gear in front of a stay-behind Babs. It’s an innocuous scene, but one that I can’t imagine has been done anywhere else before aside from the animated series.

But it’s how Redondo illustrates Nightwing in shadow that really makes this run feel authentic and exciting. By now, multiple artists have followed Scott McDaniel’s habit of drawing multiple shots of Nightwing acrobatically making his way across the panels, but several times the character has been shown in half silhouette, almost as dark as Batman. That feels right, and it doesn’t suggest that he’s anything like Batman, at least not on the surface. Shots of his blank eyes do the most to sell his experience and edge without going overboard with martial arts or violence. It’s all part of what I’m liking about this run, the mantra that less is more.

The plot of Dick being a newfound billionaire is still a tiny bit odd for me, as he’s acting like he’s never had money before. There have been a number of times where Dick was strapped for cash, but he’s not Spider-Man. He’s familiar enough with spreading the wealth around, so the weight of his fortune did feel a little bit unusual as a concern. But recognizing that as the plot we’re going with, I like his reasoning for a safety net for people. Wonderfully characteristic and simple enough as a starting ground to get into what’s sure to be a politically charged storyline.

Nightwing #79 is just as good as the last issue, possibly more. The character of Nightwing continues to be a solid and faithful representation of one of DC's best, and it's my most anticipated book from here on out.