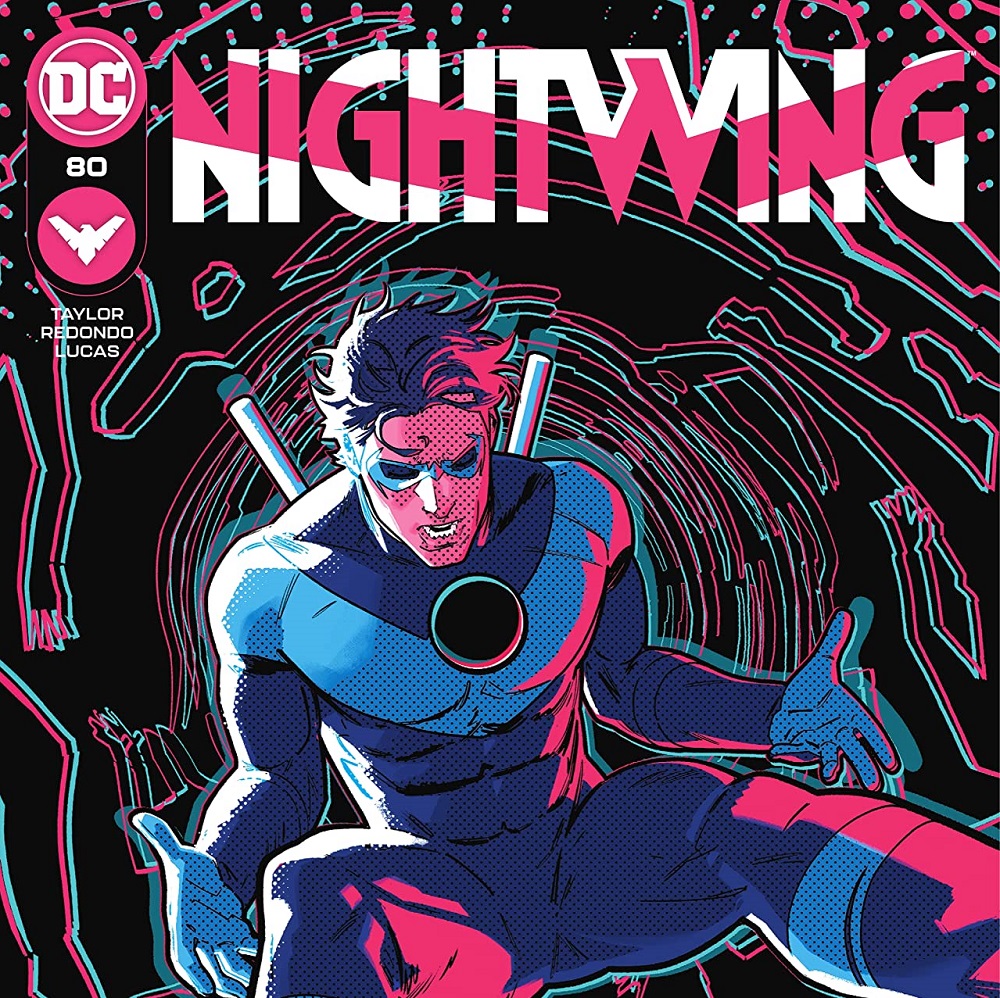 Overview: In Nightwing #80, Robin comes to Bludhaven to help Nightwing and Oracle investigate the mysterious Heartless!

Synopsis (spoilers ahead): Nightwing #80 begins with Dick awakening at 5PM to a couple of investigating policemen questioning him over the death of Martin Holt, the homeless father he encountered in the last issue. Barbara returns to serve as Dick’s alibi, and after he’s cleared, the two get to work on finding Martin’s son Elliot. Nightwing calls his surrogate brother Tim Drake a.k.a. Robin into town to help with the case. With Nightwing and Oracle’s eyes from the sky, Tim goes into the tent city where the homeless children Dick encountered in the last issue provide information into the serial killer carving out people’s hearts. Suddenly the children are threatened by Brutale and the Electrocutioner, now working as lackeys for Blockbuster. Nightwing and Robin come to the rescue, quickly defeating the two supervillains before a fire breaks out. Robin presumes it was started by the two thugs, but Nightwing confirms it was Heartless, as he’s confronted by the man in question on the ground.

Analysis: Another issue of Nightwing, another comfort food comic that puts a Bat-Fan’s mind at ease. Three issues into the run and it’s almost a given that the next one will be reliably fun. With Redondo’s quality artwork, the brilliant colors by Adriano Lucas, and Tom Taylor’s gentle character touch, Nightwing feels like a series that’s been a long time coming, but needed the tumult of the last ten years to arrive. So much of this feels like a plea towards not just familiarity, but characters that should always be present. Dick, Babs, and Tim feel like Dick, Babs, and Tim, and their sense of humor, resolve to help the less fortunate, and utter competence when it comes to crime-fighting is depicted with such verve and skill that it provides a sense of relief jumping into each issue. A damning pronouncement of the last several years of DC Comics to be sure, but only to say how much I’m enjoying this book.

There’s nothing bad or wrong at all with Nightwing #80, so let’s ponder about the future. Three issues in and the Dick and Babs shipping continues, with open enthusiasm. Taylor has fun with the romantic tension, but he’s also clearly keeping it in the readers’ heads to the point that I have to believe it’s going somewhere. In the past, Dick and Babs’ relationship was always something vaguely remarked upon as a thing that happened, but can’t happen again. It’s never been specified, and part of that is the relationship was only really materialized during Devin Grayson’s Nightwing run, which considering how long both characters have been around, is a short amount of time. The most recent two instances were in Dark Nights: Metal Multiverse, and before that, the aftermath of the failed Batman-Catwoman marriage right before Dick lost his memory. Those clearly felt like teases for something that wasn’t soon in the cards, but Taylor’s playing with it at the very beginning and constantly. The first scene of his run was Dick and Barbara meeting as kids. In this issue, when the cop asks about the nature of their relationship, later followed by Tim asking about it, it’s sitcom-level storytelling that this is something to be confronted with before too long. At the rate it’s going, we may see the new ground on this between issues #6-12 of the run if I were to guess. Taylor’s too storied, too seasoned of a writer to not pay this off, and with the shackles of 90s nostalgia unclasped in this post-Dan Didio era, I’m excited to see when and how it goes down.

Speaking of 90s nostalgia, Tim Drake makes a welcome appearance teaming up with Dick in Nightwing #80. Tim and Dick haven’t interacted much since Tynion’s run on Detective Comics a couple of years back, and it was even rarer before then. Their brotherly bond is a hallmark of Bat-Family fandom and another odd casualty of the New 52 era. With the truncated timeline that was full of holes, I remember an issue of Red Hood and the Outlaws where Tim was said to be Jason Todd’s best friend, which never made any sense for a hundred different reasons. Now we’re back to the classic Robin duo, with a callback to Nightwing #25 (volume 1) with the two traveling atop moving trains. I also like how Dick employs Tim, not for his Robin skills or any over-the-top genius planning, but to just use Tim’s ability to blend in as a kid. I still believe Tim should be at least eighteen by now, even with the messy timeline. It does seem like, despite the restoration of the pre-52 continuity, the characters are all still younger than they should be (except for Damian who’s thirteen). Nevertheless, Tim asking Dick about Babs reminded me of a number of scenes, from the original Nightwing #25 to even Cataclysm with the three of them reuniting after the earthquake. Great stuff all around.

This isn't much of an issue to get into plot-wise. It's very straightforward, with its plot bare bones and the character interaction doing the heavy work. From Dick's Black Canary t-shirt to his Adam West Batman mug to the return of Chuck Dixon era villains Brutale and Electrocutioner, this is pure comic book fun from top to bottom. No surprises, but a lot of enjoyment.