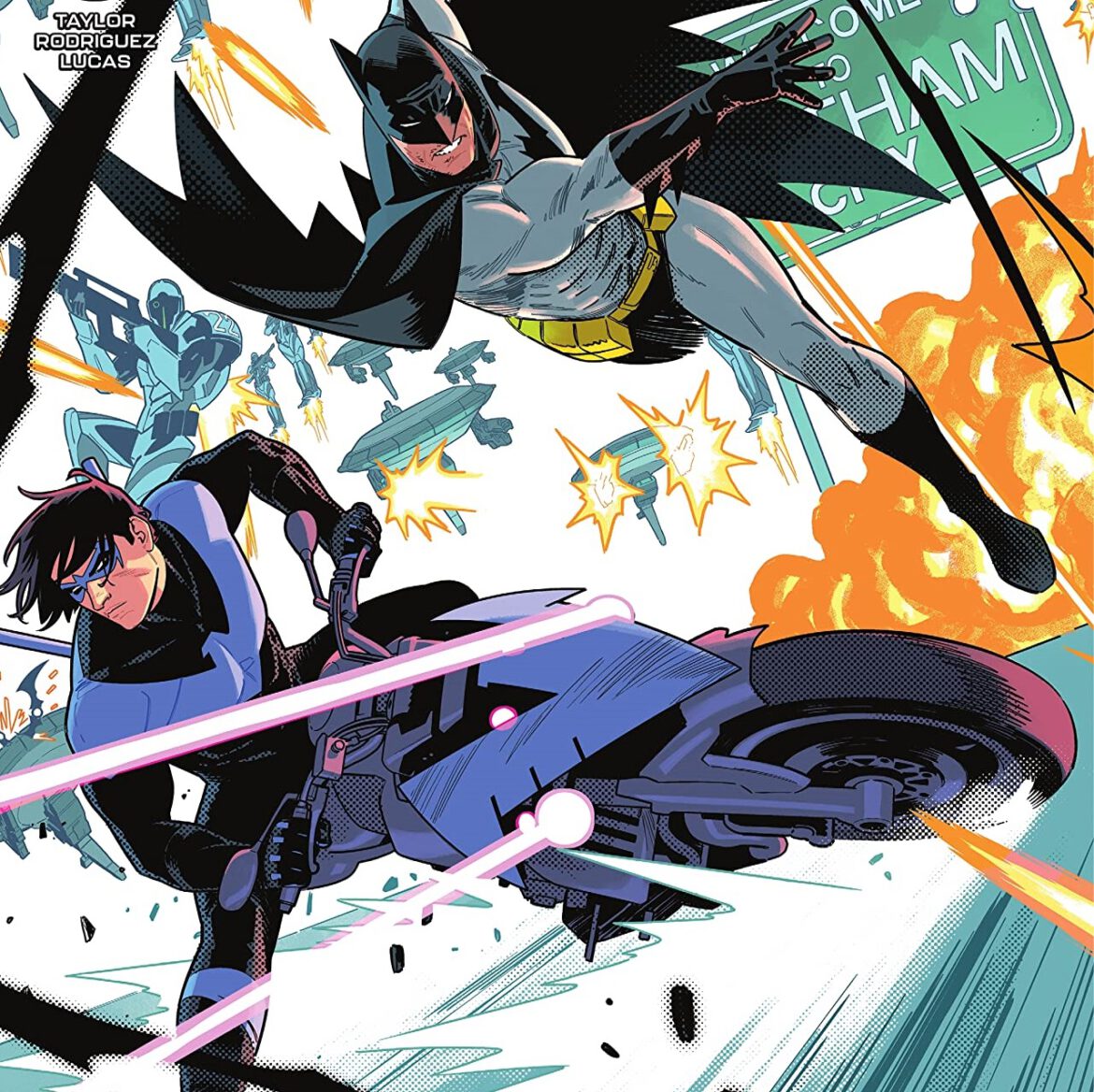 Overview: In Nightwing #84, with Gotham under siege from Fear State, Nightwing returns to his old home to save the city and Batman!

Synopsis (spoilers ahead): As Nightwing #84 begins, Nightwing is out on patrol in Blüdhaven and receives an encoded message from someone using Oracle’s communication frequency. He quickly drops off Haley the dog at his neighbor/landlord (?) Bridget Clancy’s room, and high-tails it over to Gotham City. It doesn’t take him long to understand the state Gotham is in under the control of the Scarecrow, who has forced the city’s political leaders to enact a complete Fear State and curfew enforced by high-tech stormtroopers.

Nightwing reaches Crime Alley, where he’s ambushed by the Magistrate’s stormtroopers. He can only fend them off for so long before he’s outnumbered, but luckily Batman arrives in the nick of time. The Dynamic Duo increase the odds, but ultimately retreat by rushing through several apartments before ducking down into the sewers. Batman says that he’s needed backup to defeat the Scarecrow and instructs Nightwing to reach Oracle at her Clock Tower.

When Nightwing meets Oracle, she’s surprised to see him and is furious that her Oracle frequency is endangering the lives of her friends and family. She goes into the shadows and emerges in a darker version of her Burnside Batgirl costume, complete with a fuller cowl and a long bo staff, ready to fight along Nightwing’s side.

Analysis: Nightwing #84 is fine. Longtime readers of the Bat-Books are well aware that before long, every storyline maintained by the current writer has to get derailed by the overarching Bat-crossover story that will inevitably pull the supporting characters back to Gotham. This issue had some mad Cataclysm vibes with Dick traveling back to Gotham in search of Barbara. It didn’t feel like an homage here (in that story he was on a speedboat), but the similarities in recurring elements in these kinds of superhero crossovers make the whole exercise feel repetitious.

But I’m not going to be overly negative on this one. The Bat-Books are pretty much solid across the board, and James Tynion’s Fear State is a perfectly good storyline. It always makes sense for Nightwing to return and help out, and we get some nice moments like he and Batman fighting together, escaping together, and Batman calling Dick his son. Taylor’s been doing a good job keeping the Bruce and Dick relationship amicable, and it’s good to see the two of them together after issues of them apart under this writer.

One thing that threw me for a loop was the random reappearance of Bridget Clancy. Talk about a blast from the past. For those who don’t know, Bridget Clancy was the Chinese-Irish landlord of Dick way back at the very beginning of Nightwing’s first title, created by Chuck Dixon in 1996. She was a minor love interest for a time but eventually fell at the strength and power of the Dick and Babs shippers, which included Dixon himself. When Blüdhaven was destroyed during Infinite Crisis, Clancy was out of town and the only one aside from Dick to have survived. But I’m positive, aside from a brief appearance in the mid-2000s, that we haven’t seen her for about fifteen years. She’s a welcome presence, but I would’ve liked a reintroduction. It’s here where I’m reminded again of Tom Taylor’s criticism for writing like a fanfic author. I would say Bridget Clancy is something of a deep cut, and even though she’s on a single page, some inner monologue captions from Dick would’ve been nice just to establish that she’s not new…or maybe she is to him now? I don’t know, continuity is still precarious. Clearly, Bludhaven’s blowing up hasn’t happened anymore, so maybe she went nowhere. Ultimately it’s good to see her again, and I hope this isn’t just a small bit of fanservice and she’ll stick around.

My major critique of Nightwing #84 is the artwork. Let me be precise, Robbi Rodriguez is a very solid artist. He’s done solid work elsewhere on Spider-Gwen. But it’s a very sketchy, moody, almost graffiti style, and while it works better here than in Batgirl last year, it’s a dramatic shift from Bruno Redondo’s sublime renderings. Nightwing’s face is very cartoony, and the colors by Adriano Lucas, while good, make this book feel a bit too different from the six issues that came before it. It’s tough because this looks like the current Batman title with Jorge Jimenez. Sketchy linework, harsh, digital coloring. If the intention was for Nightwing to better resemble what’s been happening in Fear State, then it makes all the sense in the world, but I think that’s at the expense of those who only read Nightwing. Now I read most of the Bat-Books out right now, but Nightwing’s a higher priority, and that feeling of the title getting hijacked feels like it’s in sharper relief with this art change. So it’s not a knock against Rodriguez as it is against the decision to coincide with the story, which at the end of the day isn’t a bad idea, just one I fall on disagreement with.

The last thing is obviously Barbara re-suiting up as Batgirl, once again. When this was first announced that there’d be a new Batgirl design, I crossed my fingers for Stephanie. When it was revealed to be Barbara in the suit, I almost considered dropping the Bat-Books. So much time and effort has been wasted on trying to build up Barbara as the core Batgirl, and I felt we had finally arrived at a good place where all the characters were. Luckily with last week’s announcement of the Batgirls title, I’m thinking this is only for the purposes of this single story. It’s a decent look, but I’m not interested in another Babs vs. Oracle fight. Still, it keeps Taylor’s track of having Babs be the deuteragonist in the book.

This is a fine issue. Nothing stupendous, but it's certainly not a bad read. Decent all around, with the faults only due to the fact that it's a requisite tie-in issue, to a story that's been good anyway. I eagerly await the return of Taylor's story, but I would still recommend this for the month.