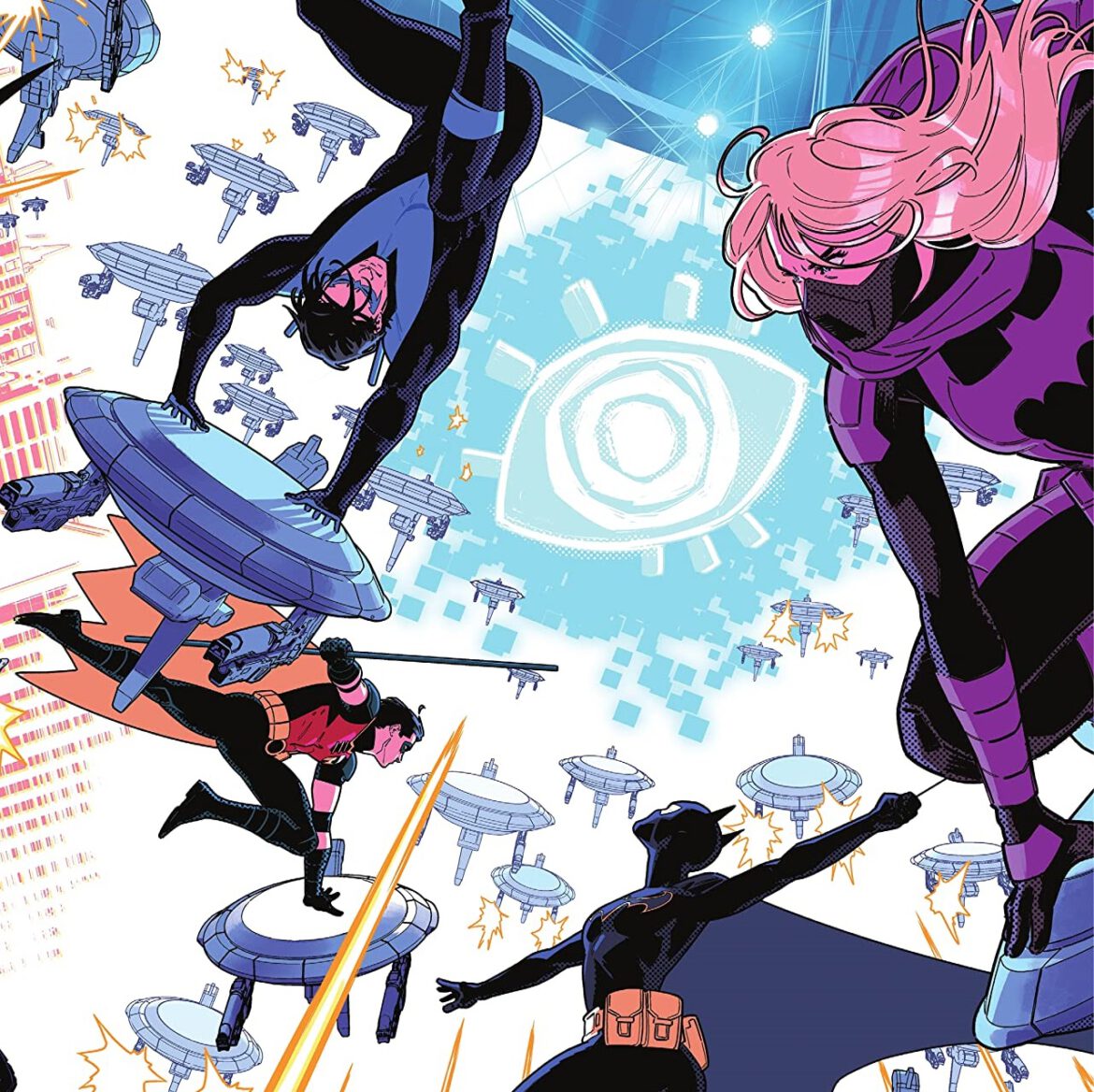 Overview: In Nightwing #86, Nightwing teams up with the Bat-Family to help take down the Magistrate.

Synopsis (spoilers ahead): As Nightwing #86 begins, Nightwing, Oracle, and Robin watch in horror as Oracle’s Clocktower comes crumbling down from explosions set off by Seer. Breathlessly, they rush to the site, hoping against hope that Spoiler and Batgirl somehow survived the collapse. Spoiler radios Oracle, informing the trio that they escaped before the Clocktower fell, and the Bat-Family reconvenes two blocks down.

Nightwing and Oracle inform the young heroes that Skybase-1 is Simon Saint’s headquarters, and if they bring that down they can take down the Magistrate, along with Seer. The five disguise themselves as members of the Magistrate, force themselves onto the Skybase-1, and head for Saint before Seer reappears and warns that there are a group of captured children aboard. They rescue the kids before Dick and Babs reach the control room and bring down the airship. All five escape with the children, and Dick congratulates Babs on defeating Seer, but Barbara knows that the fight isn’t over, especially with her still not knowing who Seer really is.

Analysis: The three-part Fear-State tie-in story comes to an end, and now that it has I’m comfortable saying it’s been the weakest set of issues in the Tom Taylor Nightwing run. That’s not to say that it’s been in any way bad (of all the issues this year, Nightwing #82 gave me the most pause). It’s been a very simple, nuts-and-bolts kind of crossover, very reminiscent of the stories of yesteryear like Legacy and Cataclysm. Taylor achieves that vibe, somewhat. Although with Nightwing #86, I think he made it simpler than it needed to be.

I like the opening with Dick flashing back briefly to his parents’ deaths, with the fright that Steph and Cass have died as well. It’s a solid realization of how he relates to death, and in general it was great seeing this group of Bat-Family members work together. The absence of Jason Todd and Damian Wayne made this very much more like a throwback when these 90s characters were regularly teaming up across the books. Plus, everyone’s very agreeable, and there’s not prideful posturing from the other two Robins, which gets old. I also liked that Babs is consistently referred to as Oracle, even while she’s wearing a Batgirl suit. That’s definitely a first and stays true to the intentions to big up Stephanie and Cassandra as the current inheritors of the mantle.

But I think there was a little more room for characterization in this final part, especially after the last issue had a brief but nice flashback scene with Dick and Babs. Continuity is still a bit murky in this day and age, so if we’re only counting Batman Eternal or its sequel, I’m unsure what Dick’s relationship exactly is with Steph and Cass. Especially with Stephanie, which even back in the day I don’t know if he was ever fully aware she was Robin. As for Cassandra, the two have had a somewhat sparse but nevertheless positive sibling relationship, going as far back as Bruce Wayne: Fugitive. Cassandra even defended a hospitalized Dick when he was under attack from Deathstroke the Terminator. My point is that – like with Tim and Barbara – it would’ve been cool for Taylor to fill in some blanks, and we get a tiny bit more insight into Dick’s opinions of Steph and Cass, rather than the automatic love shown to them just in this issue. I’m not complaining all that much, but it would’ve helped put a bit more meat on what’s a very straightforward story.

Additionally, there’s some banter about Dick and Babs kissing, maybe that could’ve been followed up on more at the end? The final scene is meant to set up the Batgirls series, but Dick and Babs should be talking about their relationship very soon. Barbara has kissed him twice, what reason is there at the moment for them not to pursue this? Maybe Taylor and Becky Cloonan have plans to follow up on that, and I hope so. Otherwise, it’ll feel cheap.

I’m kvetching a lot in this issue, it’s totally fine. All of the character interactions are fun, and it’s simply lovely to see some of my very favorite characters in DC fighting side by side. As a basic issue, it’s harmless, but it gets an extra half-point on a personal bias.

Nightwing #86 is a simple, straightforward Fear State tie-in. All of the character interactions are fun, and it's simply lovely to see some of my very favorite characters in DC fighting side by side.