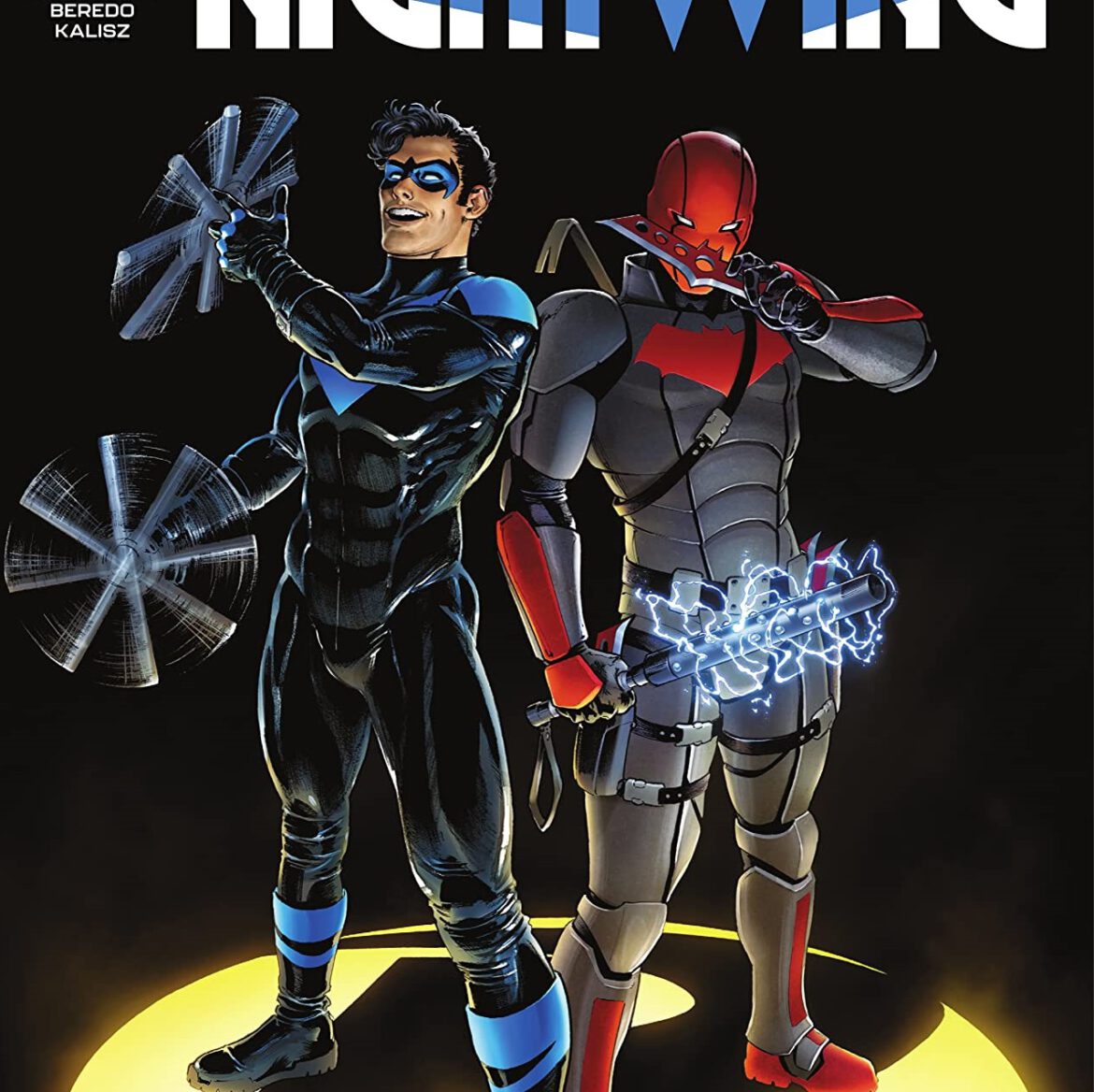 Overview: In Nightwing 2021 Annual #1, Red Hood has been caught on video committing murder, and Nightwing takes it upon himself to bring his former successor down!

Synopsis (spoilers ahead): As Nightwing 2021 Annual #1 begins, Barbara Gordon shows Dick Grayson body-cam footage of Red Hood murdering a mobster-turned-FBI informant, along with several other Feds in public. As Dick goes to Jason, we’re shown a flashback to the early days of Jason Todd’s tenure as Robin.

Once upon a time, Batman was out of town, and Alfred called Dick to spend some time with the young and newly minted Boy Wonder. Nightwing and Robin went out on patrol, pursuing a mugging/kidnapping, and easily apprehended the culprit. Nightwing tended to the young hostage, while Robin unloaded punishment on the kidnapper. Nightwing understands that Jason’s rage comes from a childhood of abuse, but reminds him that as Robin he must be better than the ones he fights. He also promises not to tell Batman, vowing to the fact that the two are “brothers.”

In the present, Nightwing finds Red Hood and quickly deduces that he’s been framed. The two locate a bullet that bounced off of “him” on camera, finding clay residue. As the fake Red Hood attacks one of the mobster’s surviving lieutenants, the former Boy Wonders descend upon him in the Batmobile, revealing him to be the Preston Payne, better known as Clayface. They use Mr. Freeze’s Cold-Gun to incapacitate and interrogate him, where Payne reveals he was hired by a drug dealer – Wolfgang Bylsma –  who at one time dealt drugs to Jason’s mother, resulting in an overdose. Jason takes point on locating Bylsma, who is trying to flee Gotham via private jet. He begins to lay into him, until Nightwing shouts “Robin!”, snapping him out of the anger of his youth. As Bylsma is arrested, Jason admits to Dick that seeing bad people arrested and sent to prison is more satisfying than violence. Like before, Nightwing promises not to tell Batman of the damage to the borrowed Batmobile.

Analysis: Nightwing 2021 Annual #1 is a very classic, traditional kind of modern annual. More like typical. I am old enough to remember when annuals were a bit more special, dealing with new and different talent or highlighting a major story during a crossover, but in the past twenty years, their relevance seems to have entirely faded off. Annuals are inconsequential, and unless the artwork or story is just godawful, they are typically inoffensive. This year’s Nightwing annual is that; it’s harmless. Part of the fun with Taylor is that he’s such a fan he can’t resist going back into the past and having fun with the Dick and Jason relationship, and I totally get that. The main story is supremely lightweight and could have been told with Jason teaming up with almost anyone. That’s sort of the problem, but it doesn’t begin with Taylor.

This has certainly been said before, if not by me than by others on this website, if not the internet (unless everyone else has died off), but Dick and Jason didn’t have much of a relationship to speak of back in the days of the second Robin. In the 80s, Nightwing was almost exclusively off in the pages of The New Teen Titans. Occasionally he would guest star in a one-off special or Action Comics Weekly, but when fans today ponder at how Dick and Jason related to each other, they’re really coming up with new stories every time. Apart from the classic Batman #416 which depicts Nightwing learning of Jason’s inheritance of the Robin mantle and confronting Batman about it, there was not much meaningful interaction Post-Crisis between the two (I specify Post-Crisis because it is a bit different Pre-Crisis, where Dick’s partially responsible for Jason’s death and offers to adopt the boy himself – while he’s still Robin).

There are also the personality clashes between Dick and Jason that modern writers have a fun time with. Jason’s reputation as the angry boy has been almost completely rewritten in the decades since he was Robin. You could count on one hand the times when the kid actively went too far in dealing out violence to criminals, yet this is the second or third time this year that we’re seeing flashback stories of Robin losing his cool or sadistically attacking a perp, with the other times in Chip Zdarsky’s flashbacks in Batman: Urban Legends. Look, I get that it distinguishes all four of the main Robins from one another, and you can’t put your hand on your heart and say that Jason was the calmest and most rational sidekick ever. But it does become one-dimensional storytelling when this is the only thing any writer ever comes back to. The point was put across with the execrable Titans series, albeit unintentionally, but if Jason’s such an obvious red flag from the very beginning, why would Batman ever let him keep that cape? This has to be better considered because it turns the Bat-Family into a bunch of idiots if all their memories of Jason Todd as Robin is as a rambunctious punk. When I was growing up (the second time I’ve said that), Jason was the cautionary example of the dangers of crime-fighting. His costume memorialized in the Batcave was a reminder of Batman’s history, Batman’s failure, and the legacy that both Dick and Tim never kept far from their minds. His history of violence wasn’t really ever brought up until Judd Winnick brought the character back in Under the Hood. It’s definitely a way to go, but that was fifteen years ago.

All of this isn’t to slam Tom Taylor. He’s merely following a trend of thought. In the flashback, Jason’s not mad at Dick, but he’s immediately annoyed. He has to be told by Nightwing to not have a run at crooks more than necessary, a scenario that was exactly the same in his origin story (with the crook in question being Two-Face). He’s not even being a detective in Nightwing 2021 Annual #1, following Dick’s lead and questioning obvious moves like looking for the bullet in the sewer. It’s unbecoming of a character of his training and the imagination of someone who must have more emotional and intellectual depth than just “Grrrr I’m angry.”

A lot of this is in my thinking of the writing. When first reading the story, my biggest problem was with Clayface, who in this story is said to be the Preston Payne version. That’s completely wrong because unlike Basil Karlo, Matt Hagen, and several others, Preston Payne was a very specific and unique Clayface who was not like any of the others that came before or after him. He was the third Clayface whose corporeal form was melting and whose power was to melt others into protoplasm. He was never the kind of animated, BTAS mud-man Clayface that has since defined the layman’s understanding of the character. I appreciate the reference to the older characters, but it’s entirely incongruent with who he’s supposed to be. I understand that it matters little, but it’s a bit annoying because Payne was a very unique character. Of all the Clayface’s, most of who were either simple criminals or victims of fate, Payne was actually insane and a tragic figure. None of those interesting qualities are found in this story, so why use his name?

I don’t hate this issue. It gets a number of things mixed up in regards to history, but that’s the comic book game these days. One writer can’t be expected to know everything. But because Taylor is such a fan and has invoked continuity often, it does make his mistakes stand out that much brighter. Nevertheless, it is fun to see the Robins team up and to get flashback stories, even if they could’ve been better rendered. I would’ve liked to see Dick and Jason lean more into Jason’s hatred of drug dealers, and how Dick sees Jason’s personal war on crime, rather than a bog-standard adventure. Some details were nice, such as Dick making fun of him using crowbars and complimenting him on his relinquishing of guns. This is moderately enjoyable. I just wish a tighter eye were kept on the details the writer intends to bring into focus, rather than a glancing one.

There are a few continuity issues at play in this issue, but overall, this flashback adventure with Jason Todd and Dick Grayson was an enjoyable one.