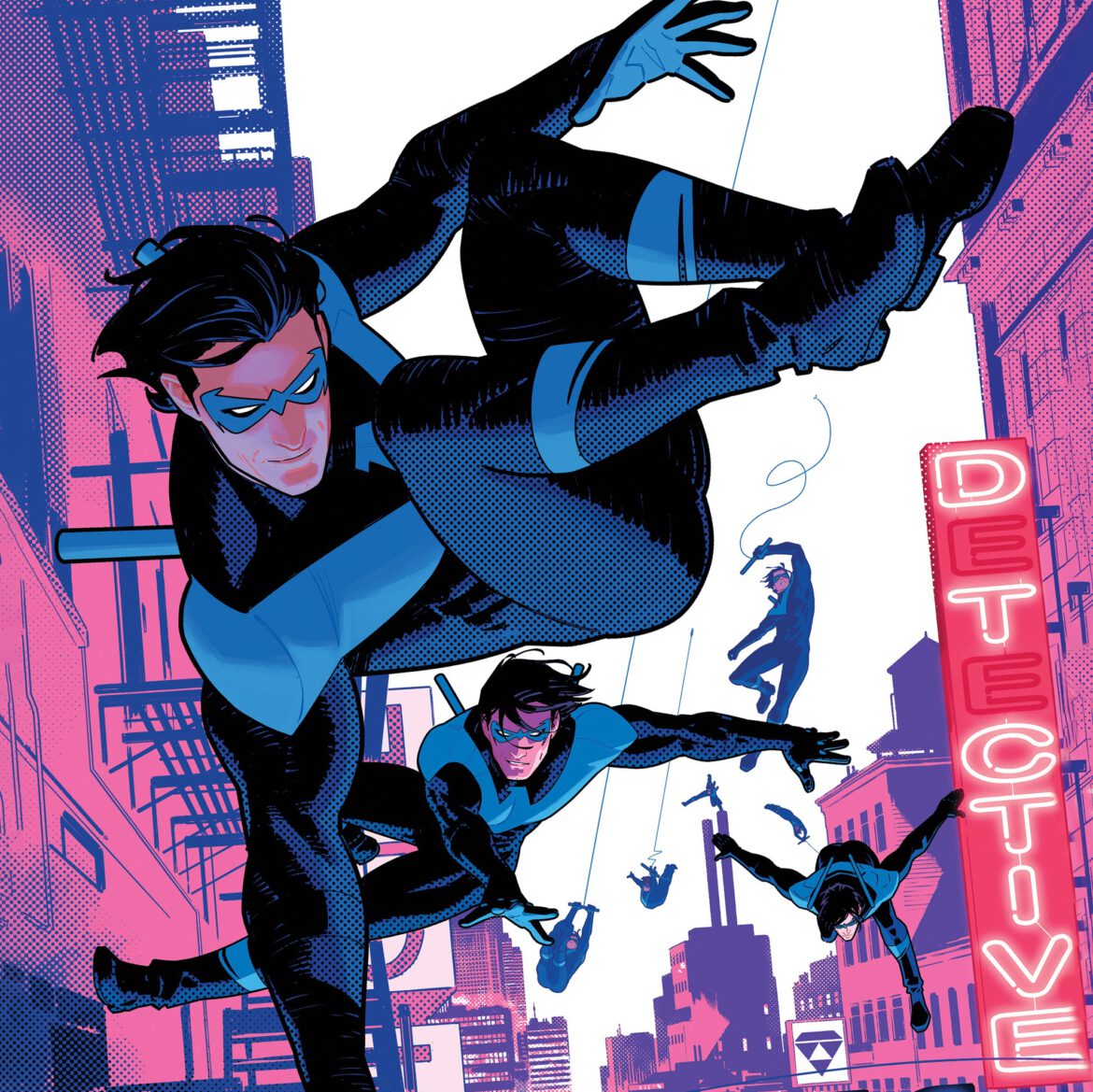 Overview: In Nightwing #87, hitmen have been hired to assassinate Dick Grayson, and they’ll stop at nothing to chase him down, even kidnapping Bitewing!

Synopsis (spoilers ahead): Nightwing #87 begins on the streets of Blüdhaven, Dick gets a call from Barbara Gordon that a hit has been put out on his civilian identity. Just as he’s attacked by gunmen in broad daylight, Dick quickly changes into Nightwing and races home to fend off his attackers. He’s seconds too late as the gunmen have already kidnapped his new dog Haley, a.k.a. Bitewing.

On the kidnappers’ trail, Nightwing pursues their van via an on-the-street fan’s lent motorcycle. As the chase speeds across town, Dick rendezvous with Batgirl and crashes into the gunmen’s hideout. The two quickly make short work of the assassins, with Nightwing managing to save Bitewing from a fall at the nick of time.

Analysis: This is such a simple – yet – solid comic book issue, there’s only so much I can say about it before any of my thoughts take away from the experience of reading it for oneself. Nightwing #87 is a fun comic. Bruno Redondo and the rest of the art team have created the first run-on adventure for a superhero that I’ve ever seen, playing with the time in sequential storytelling in such a clear, concise, and coherent way that seeing the whole image would only serve the confuse the reader. This is what comic books are meant for, storytelling experimentation. And Nightwing is a great candidate for such a great first try.

I liked the details in the background of Blüdhaven, from the BLM sign to the various Queer flags and the graffiti “Blüdhaven Loves Nightwing” with his insignia used for a heart symbol. The city of Blüdhaven has come a long way since the grungy and grimy days of Scott McDaniel’s renderings, where it looked like the filthiest city in the world. With Redondo’s artwork, it’s akin more towards Burnside from the pages of Batgirl, albeit bigger and wider. I kind of wish some of the McDaniel grunge would remain to differentiate it from Gotham, but all the same the city serves as a beautiful playground for Nightwing to run through. I’ve commented on Redondo’s adherence to the multi-shots of Nightwing as he swings through action scenes, and we got a taste of it with the cover to Nightwing #83 of Dick changing out of costume. I like the trend they’re solidifying of Dick changing in and out of his suit in record speeds because he’d need to be able to, and it’s a skill he would’ve had to master way back when he was Robin. It works as both a character beat and a sneaky bit of fanservice, as this issue shows off that Dick wears black speedos.

Speaking of skills, I also like how both he and Barbara just manhandle the hitmen throughout the book. The suspense isn’t whether or not they’ll kill Nightwing, it’s whether or not they’ll kill his dog. But Dick and Babs handle these guys almost effortlessly, taking them down with one hit and just speed-running through the gauntlet. I recall a similar scene happening in Nick Derington’s Batman stories, with Batman and Nightwing, and I liked seeing it there as well. Normal thugs, even if they’re dangerous, shouldn’t hold a candle to the lifetime of combat that Dick Grayson has lived a thousand times over each year.

My final note is the reappearance of Batgirl, which I’m conflicted over. I thought Fear State would’ve been the final word on Babs suiting up, especially as she won’t be in the Batgirls title, but she does in the last act in this issue. Even though I prefer her as Oracle, it was cool seeing her jump into action and giving Dick an assist at the end. It heightened the action and was nice seeing the two of them together. Being a strident traditionalist, I’m used to knowing that originally Batgirl and Nightwing hardly appeared on-panel together before The Killing Joke, let alone teamed up, but it’s been years since DC retconned all that. Redondo did design her latest look, then didn’t draw her during Fear State, so it’s fair dues that he had a crack at it here.

Overall this is an issue that's far more fun to read than it is to write about, and is highly recommended for sheer creativity alone.