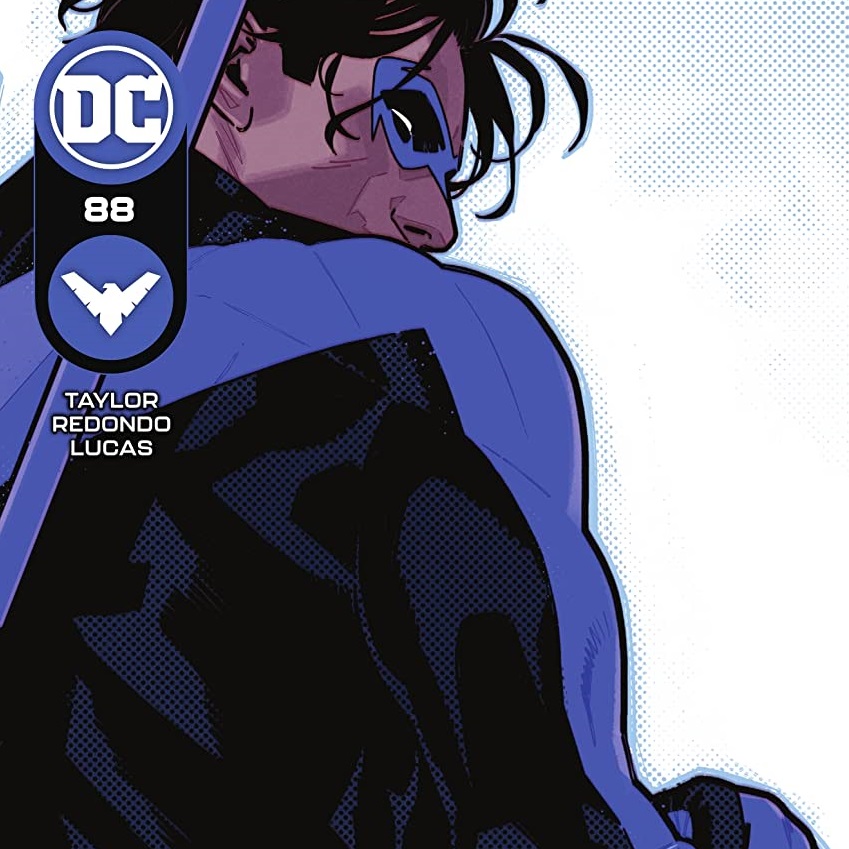 Overview: In Nightwing #88, the attempts on Dick’s life continue, requiring a special kind of teamwork to fight back at Blockbuster!

Synopsis (spoilers ahead): As Nightwing #88 begins, both Blockbuster and Oracle are preparing in secret for Dick Grayson’s next public appearance at the founding of the Alfred Pennyworth Foundation. The former is in contact with a couple of mysterious assassins, while the latter works to encourage Dick to be mindful that the contract on his name is still active. Both she and Nightwing agree that Dick’s public identity has become more dangerous than his costumed one. Nevertheless, Dick believes in his mission to save the helpless in Blüdhaven and goes ahead with the appearance.

Before long, one of the assassins – Gunbunny – tries to kill Dick via sniper fire but is stopped by Starfire and Donna Troy. The Titans have come into town to protect Dick, and when Gunbunny’s husband Gunhawk tries to kill Dick again, he’s swept into safety by The Flash (Wally West). The Scarlet Speedster takes Dick to meet with Mr. Terrific, who gives him a replica of his older Nightwing costume, complete with modified protective gear and armor to help with the assassination attempts.

Nightwing joins the Titans in returning to the Pennyworth Foundation, and the heroes soundly defeat Blockbuster’s remaining hitmen. Later, the Titans confront Blockbuster himself and acknowledge that they can’t prove he was behind the events of the day but declare that Dick is under their protection. As an enraged Blockbuster tries to reconnect with Gunhawk, the latter is attacked by Heartless and has his heart snatched out from his chest.

Analysis: For the past few months, I’ve been really contending with the suggestion online that Tom Taylor is at heart a fanfic writer, meaning that his fandom is on his sleeve in steering the direction of the characters in a way that may be lesser than a more distanced, professional writer. I’ve decided to let that go, as it’s never affected my enjoyment of his run in any real way. Some of my favorite stories have always been from writers who began as fans, and with the Nightwing book written to be as consistently wholesome and entertaining as it has, it’s a kind of negative reviewing perspective that doesn’t do anyone much good. Even though the thought crossed my mind once again with the appearance of the Teen Titans, it’ll be the last time I mention it in these reviews.

It’s also trying too hard to outthink the writer, whereas upon revisiting Nightwing #88, it’s almost too obvious a move for Barbara to contact the Titans for Dick’s protection. This might be downplayed in recent years, but the Titans are some of the DC Universe’s most effective heroes. Especially with the modern Cyborg, Donna, and Starfire, Babs really couldn’t have done much better save for calling the Justice League itself. And I’m continuing to like Babs in this book, as the traditionally concerned, quick-witted, occasionally naggy partner of Dick who’s visibly head over heels for him. It’s a classic dynamic from the early Dixon and McDaniel Nightwing days from the classic era, and while I’ve not seen anyone put stamp-to-paper and say that they are officially dating, between this and Batgirls #1, it’s hard to state otherwise.

The storyline in Batgirls has Barbara living with Steph and Cass, so I would like this book to correspond to that pretty soon, just as an explanation. There’s also Barbara’s active role in Gotham during the current Shadows of the Bat storyline in Detective Comics, as well as her watching over her father in the pages of The Joker. Three-quarters of her monthly appearances have Barbara in Gotham, so if that’s where she’s going to be across the Bat-Books, I’m wanting a scene of her waking up next to Dick and mentioning that she does have other responsibilities, just to keep the world moving at a traceable pace. Again, I really enjoy her in the book, but she’s definitively being consistently utilized in other titles, so the place where she lays her head down can’t be stretched across city limits too thinly.

Nightwing #88 sees the return of the original third Nightwing costume, far and away the most popular version, complete with finger-stripes. Taylor and Redondo had been hyping this up for a couple of months, and while I’m certainly happy to see it, my eyebrow was raised an inch just at the bombast of its reintroduction here. Continuity’s a bit of an issue as well. From the wide-eyed reaction Redondo gave Dick, it was almost as though he’d never seen the suit before. There wasn’t any comment that this was an old design, although the two are so similar that it could’ve been seen as perfunctory if there was. And it’s interesting, as I did enjoy the Rebirth suit with the stripped-down blue insignia only going across his chest and back and the blue knuckle dots. The only flourish I didn’t care for was the swooshy lines of blue and black on his boots. It didn’t speak to anything functional, just an odd, asymmetric design choice. Going back to the classic look is definitely welcome, but the reintroduction of it may have been a bit overwritten in my eyes.

I did like the return of Chuck Dixon-created villains Gunhawk and Gunbunny, who were introduced way back during Knightquest when Jean-Paul Valley was Batman (I first read Gunhawk in the pages of Dixon’s Robin). I had to read up to learn that Gunbunny (also known as Pistolera) was killed in the pages of Secret Six (Volume 2) over fifteen years ago, but as I said before, continuity is still an odd thing. This whole Blockbuster turmoil is kind of tricky for me because it doesn’t acknowledge the fallout of Blockbuster learning Nightwing’s identity and ruining his life and the whole controversy with Catalina Flores/Tarantula that ended in Blockbuster’s death. Ever since Rebirth, he’s just back as though nothing had happened. I don’t love that reckless playing with continuity, although any historical hang-ups can be owed to Dark Knight Metal Multiverse and its various tie-ins and spin-offs. A recap page or some summarizing captions could help a reader out, but perhaps Dick himself can’t remember? In any case, it doesn’t strictly pertain to Nightwing #88 or the story at large, so I’ll only mention it this one time.

It's another solid entry in the Taylor and Redondo Nightwing run, with solid writing and solid artwork. My criticisms are closer to observations than anything that prevented me from digging the issue. Happy to see the consistency and looking forward to next issue.