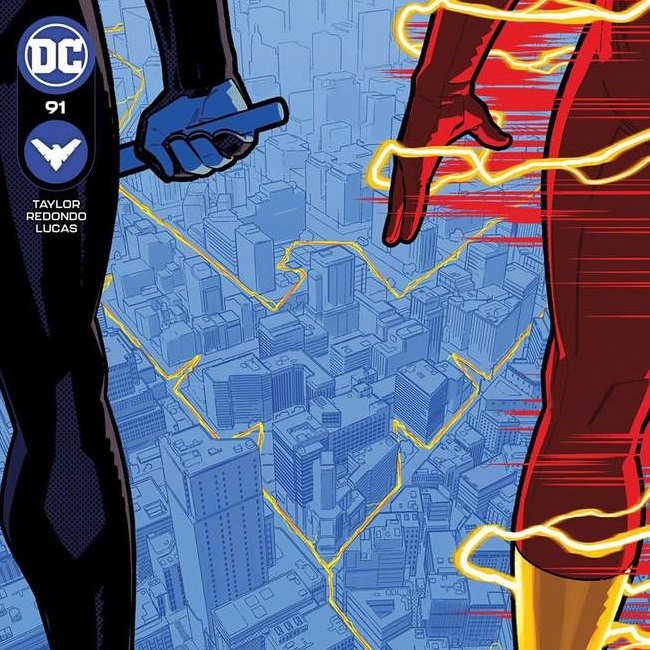 Overview: In Nightwing #91, Nightwing and Flash continue to battle KGBeast and his assassins, scarcely aware that a mythological super-agent is waiting for them in Costa Rica!

Synopsis (spoilers ahead): Continuing from the last issue, Nightwing #91 sees Nightwing and the Flash (former Titans Dick Grayson and Wally West, respectively) take on KGBeast and his men, with Flash dealing out particular punishment in revenge for the Beast shooting Dick and taking away his memories. Apprehended, KGBeast threatens the Gotham Library, but the two heroes quickly deduce and extinguish that threat. Back at the home of Wally and Linda Park, Oracle goes thru the Beast’s phone and finds correspondence with La Agente Fúnebre, a mythological secret agent assassin whom even Batman believed to be a myth. The heroes track the messages to a cell tower in Costa Rica, whereupon they’re immediately attacked by a group of trained killers. Of course, the killers are no sweat for Dick and Wally, who make short work of them. Flash is then knocked unconscious by an invisible forcefield, while Nightwing is approached by La Agente Fúnebre herself. She quickly shows herself to be a formidable and deadly fighter with poisoned-tipped knives. Luckily, Dick’s suit had been upgraded by Mr. Terrific, so he lets her get in close before knocking her out.

After the fight, Dick and Wally find the hub of Fúnebre’s operation. Together they manipulate her contact information on the network of assassins to lay traps for the assassins to get captured by various heroes including Superman, Starfire, and Tempest. Back in Blüdhaven, Lady Shiva approaches Blockbuster, informing him of the various assaults on La Agente Fúnebre’s people and stating that Dick Grayson is clearly off-limits, saying that he has to try and finish Dick off himself if he still wants to kill him.

Analysis: In the synopsis I provided above, there’s a perfectly action-packed and suitable comic book issue presented in Nightwing #91. The basic facts of the events are gum-cracking superhero action, and it’s very solid. It’s another good issue from Tom Taylor with guest art by Geraldo Borges.

What I didn’t mention are the little in-betweens that Taylor incorporates for the Dick and Wally relationship that I felt were a bit clunky and even overindulgent. I think a surer hand, or at least an older pro like Devin Grayson, might’ve made those scenes work better for me. Because, nice as they were in essence, they came off as distracting and almost out of character for two pros of Nightwing and Flash’s caliber. Specifically the Flash.

Like Conner Hawke and Kyle Rayner, Wally West is my Flash. He was the Flash for twenty years, and ever since Barry Allen returned, he’s been the Flash character I’ve been most invested in. Like the rest of America, I was not happy with the story Heroes in Crisis and have been enjoying the fallout from the multiverse stories that worked to restore his continuity as the classic character from the 2000s. Seeing him back with his family has been a treat, and I’m always a fan of the original Titans getting back together as adults. All of that being said, the way Taylor depicts Wally’s love for Dick is a bit striking in Nightwing #91. Wally’s affection for his BFF really jumps out as something almost more, and it’s the first time I’ve ever really reacted to it in a way that was separate from the story at hand. For one thing, this whole “best friends” thing is an inconsistent relationship that is not Taylor’s fault, nor his creation. I’ve seen Dick say that Donna is his best friend, and also Alfred, so the idea is that Robin and Kid Flash were the two sidekicks that made good and maintained a close friendship because of it. I like that idea, but the fact remains that they don’t really interact with each other often for that to be the case. I’m not trying to get on Taylor’s case too harshly, again it’s been set up at least as far back as Devin Grayson’s Titans run, and even going further back there’s definitely a strong friendship throughout the days of New Teen Titans with Wolfman and Perez.

But think about how Wally’s been written in this series so far. In Nightwing #88, Wally comments on Dick’s pretty face being too attractive for anyone to shoot. A reasonable thing to say, I’d say the same if I were him probably. In the last issue, he practically leaps onto Dick once he sees that Dick has survived the apartment explosion. And with Nightwing #91, we learn that Wally has been checking in on Dick once an hour for weeks at a time ever since Dick’s gone public with his money. He even asks Dick if he’s being “stalkerish.” That is…really intense, and I don’t know if Taylor is going for a crush-thing here, or if he’s really trying to put across how close these guys are. It’s extreme, is what it is, and I’m once again reminded of the fanfic accusation of Taylor’s writing style, putting character relationships and emotions at the forefront of the stories. Because Dick has led a dangerous life…his entire life, and Wally knows that. If Taylor had made a special point about Wally reacting to Dick losing his memories from getting shot by KGBeast, connecting the feeling of protectiveness, that would’ve made more sense. Especially with Wally recently suffering from his friends’ loss of memories from Rebirth and everything that came afterward. There’s an honest through-line of reasonable concern that would lead to Wally’s overtly affectionate actions in this issue.

But I just don’t see that being the backbone of how Wally’s written to be like he is in Nightwing #91. My question is why is this friendship so important to get across to the readers as being as intense as it is? Taylor’s been dead-on the money with everyone else. Alfred, Babs, Tim, Bruce, and Superman. All of those were pitched with precision and history. With Wally and how he’s depicted here, it frankly reads like a long-running crush, and I’m not comfortable with that being the case when Wally’s entire reason for being in the past five years was getting his family back. Additionally, I don’t know how much Dick and Wally being together is a thing in fandom circles, but it’s the kind of writing that got Devin Grayson in hot water years ago when it leans too much into out-of-continuity rendering and closer to fan interpretation. Now, this is a tightrope to walk, because disparate sexual orientations are being represented at sky-high numbers at DC, with more realistic depictions of fan-favorite characters becoming canon. Just this week as of this writing, we’ve learned that Conner Hawke is canonically asexual, with the writer posting her reasonings for the character tracking through his history throughout the years. With this year’s DC Pride Special on the horizon, queer representation is at an all-time high and hopefully will rise even higher as the years go on. So, any appetite for a Dick and Wally ship has an open window right now. And that would certainly be interesting. My problem is that if that’s what might be driving Wally’s depiction in this story, it’s an uneven one. It’s too excitable, too noticeable.

And maybe I’m off-base, as Wally tells Dick to settle down with Barbara, essentially telling him to put a ring on it. Speaking as a married character to an unmarried one, that tracked, but I did bristle at the timing of that conversation. Wally brings this up right after awaking from being knocked out from the forcefield. Sure, all of the bad guys are unconscious, but they’re in the middle of a deadly mission and nothing tells them that it was over. It’s things like that that I find complicate Taylor’s work, character moments that occur at sometimes inopportune moments. Dick talking with Jon after the action has passed in Lois’ apartment in Superman: Son of Kal-El #9 made sense, as it was a couple of hours later. In the middle of a mission involving assassins though? Doesn’t make as much sense, especially for two professionals like these guys.

But a lot of my consternation is hypothetical. What I really enjoyed seeing in Nightwing #91 was how competent Dick and Wally were against some pretty heavy hitters. It’s always fun seeing big deal bad guys like Bane or KGBeast go up against super-powered heroes and just get wrecked. I also liked seeing Dick understand how deadly and powerful La Agente Fúnebre was while still knowing how to take her down. An argument could be made that for someone whom even Batman disbelieved existed, Nightwing found and defeated her too easily. I think that’s a fair criticism, and maybe she should’ve escaped and been put on the run, leaving her operation vulnerable to the two Titans to manipulate. I’m never really a fan of secrets and organizations existing for years underneath the heroes’ notice (The Court of Owls is a cool idea, but by 2011 the idea of Batman not knowing something about Gotham wasn’t really that new to me), so it was weird to see her built up so much and then knocked down by Dick with essentially no trouble at all.

Reviewing this issue, I’m enjoying being in the DC world. I love these characters and am happy to see them written (generally) in character, supremely confident and competent, doing what they do best. It’s the little things that always nag at me, those recurring trends in a writer’s style that I pick up before too long that holds it back in my esteem. I’m hoping that this Blockbuster storyline goes somewhere next issue, as he’s been continually punked out for months and months now. I’d love to see some real development on his end, although in fairness he did blow up Dick’s apartment complex.

Like the last issue, this was a solid read that had some eye-raising moments which I couldn't not think of when writing this review. But it's all still good.