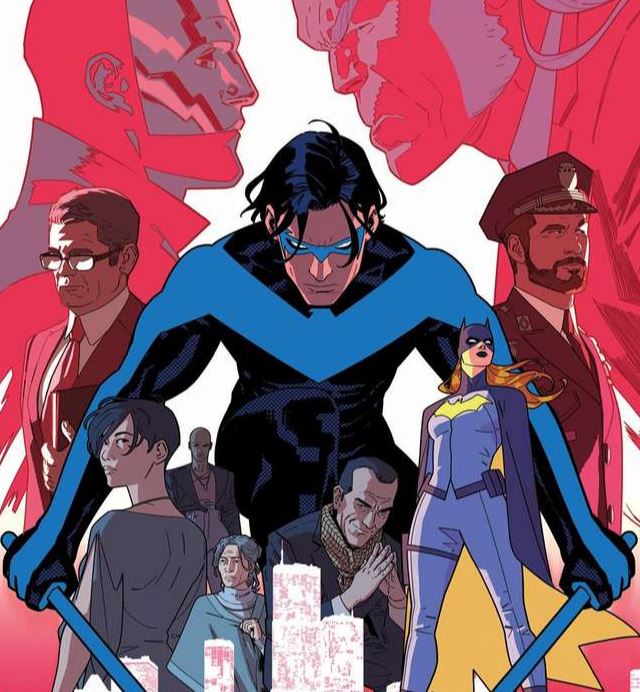 Overview: Nightwing #92 sees Bruce Wayne visiting his former ward just in time for the opening of the Haven, which is still under threat from Blockbuster!

Synopsis (spoilers ahead): Nightwing #92 begins years ago, as a city-wide blackout led to riots in Gotham City. While Batman was preoccupied with the Penguin and Batgirl was elsewhere, Robin the Boy Wonder threw himself into the fray of a thirty-person mob in order to save one shopkeeper. Outnumbered, he takes a beating before being rescued by both Batgirl and Alfred, who arrives in the Batwing to scare off the mob. Back at Wayne Manor, Batman is furious for Robin disobeying orders to stay out of sight, but Alfred convinces him that yelling won’t make his partner heal faster. Bruce unmasks and sits with Dick, understanding that he’ll jump to help anyone, at the risk of his own life, no matter the odds.

In the present, an adult Dick Grayson and Barbara Gordon are attending the official opening of the Haven when they run into Bruce. Present for Dick’s big day, the three walk towards a statue of the late Alfred, erected in memorial for their beloved father figure. They’re then greeted by Blockbuster, who continues to threaten Dick with Mayor Zucco in tow. Later that night, a feeble attempt to destroy the park is thwarted by Nightwing and Oracle, who unmask the assailants and capture them on camera. Blockbuster seethes at the news, but is then greeted by Heartless in the hallway of his office building, having made short work of his security force.

Analysis: So the opening flashback scene of Nightwing #92, I loved. We rarely get flashback stories with not just the original Dynamic Duo but the Dynamic Trio, and this was one of those scenes that worked fine in how those classic stories could be contextualized in the modern era. We’ve got yellow oval Batman (Batgirl Year One messed that up by having him with the single bat, which was not the case in the New Look era) and a Robin who appears younger – or at least shorter – than Batgirl. We’ve also got old-school coloring, and the Silver Age Robin logo would appear every so often. I also thought the tension of the scene was pretty good. Dick is probably 14-15 in this scene, not super new to the role but definitely still a young kid, yet the selfless courage which defines him is well on display. Typically I’m not a fan of flashback Batman and Robin stories where the dynamic is just showing Bruce being a jerk to his partners, but this made sense. It foreshadows how things are in the present and everyone’s classic relationship of the nostalgic era compared to now and the lessons learned. There’s also a nice bit of insight into Bruce here. He relates to and admires Dick in small but important ways, and that brief silent panel of his profile in the scene between the two of them speaks volumes. We’re not really learning anything new about Nightwing with this scene, but how the other three characters relate to him it’s very well done.

Based on that scene, I was feeling a perfect score on this one. The follow-up set in the present (with another cameo by Marv Wolfman and the recently passed George Perez) is nice, with the three just walking together and missing Alfred. These are the scenes I yearn for in modern comic books, just the characters passing the time together and hanging out. Everything is always mission-based; we don’t often see their lives outside of the costumes. It’s even rarer for Bruce, Dick and Barbara to be together and not be a crossover. I’d be pleased if the entire issue were devoted to just the three of them bouncing around.

Unfortunately, Blockbuster shows up, and my complaints about his feckless appearances persist. Taylor’s simply not making Blockbuster a palpable threat, and it feels as though he’s simply coasting along with Chuck Dixon nostalgia by having him be the ongoing villain who hardly does much damage to Dick/Nightwing. Yes, he’s made Dick’s life harder with the assassination attempts. Yes, he blew up Dick’s apartment building, but he’s not ever gotten a win against Nightwing. He’s been punked-out more often than not, and his latest attempt in this issue came off as pathetic. I’m not sure how much of this is a commentary and how much is just Taylor showing off how cool Nightwing is by completely handling Blockbuster, but the indulgence here is at the expense of the investment in the story. Everything with the heroes is great stuff, but we’ve been on this storyline for almost a year, and Heartless has only showed up three or four times. Roland Desmond himself hasn’t done much, and hiring a bunch of low-level goons to spray graffiti all over the Haven is weak. Part of me anticipates that he’s being set up to be replaced by Heartless as the true big bad, but I would’ve thought if that were the case, Dick and Babs would’ve brought up how pitiful his attempts have been of late.

And then the Nightwing #92 is over, right when it felt it was truly beginning.

Taylor's a very good writer, and Redondo and Lucas' artwork kills it every time, but the Blockbuster part is the weak link in this run. It's simply ineffective as a challenge to Nightwing insofar as its not threatening to - at the very least - this reader. I'm still loving the book, but its weaknesses are as consistent as its strengths.