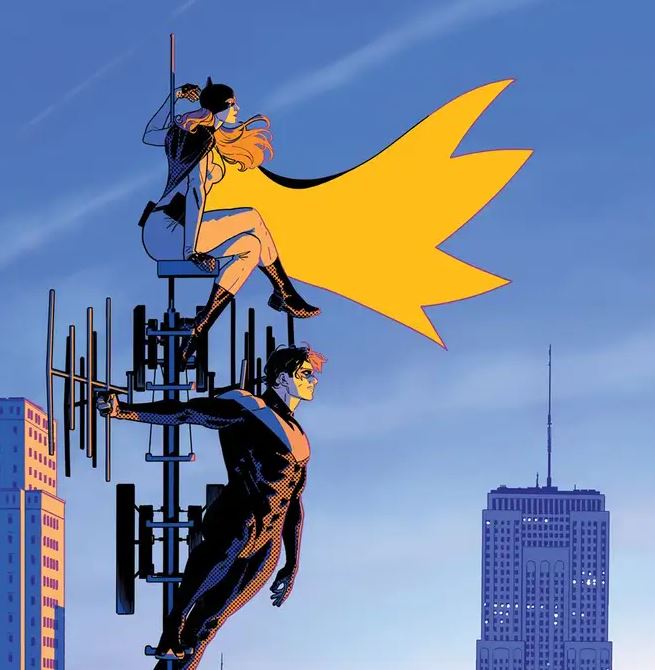 Overview: In Nightwing #93, Heartless proposes an offer to Blockbuster, vying for control of Blüdhaven. Elsewhere a proposal of a different kind might be in the works regarding the ever-warming relationship between Nightwing and Oracle!

Synopsis (spoilers ahead!): As Nightwing #93 begins, Heartless has broken into Blockbuster’s building, having easily dispatched with his security force. Heartless offers to buy the city of Blüdhaven from the crime boss, understanding that killing Blockbuster would do him no good in furthering his goals. Blockbuster is unimpressed with the threat of competition and promptly throws Heartless out of the high-rise window.

As night enters morning, Nightwing personally washes off the graffiti left by the hired vandals from the attack on the Haven from the last issue. Before long, the Blüdhaven police arrive and shoot at Nightwing on sight. A chase ensues where Nightwing escapes via his specialized motorcycle (Nightbird II maybe?), and Oracle suggests he return to Gotham to lay low. The next morning, Barbara has made a complete database of all the unmasked vandals. In exuberant gratefulness, Dick belts out his love for Babs. The two are momentarily stunned, and the awkward silence is interrupted by Mayor Zucco informing Dick that the BPD has begun arresting the at-risk minors from earlier in the series who convene at the Haven. Dick rushes back into town to confront Commissioner McClean just as the press arrives on the scene. As McClean makes the case to the media that the kids were responsible for the vandalization of the Haven, Oracle publishes the database that reveals the crooks were really off-duty police in disguise. This sends the press and the police into a frenzy.

Heartless returns to his base of operations, injured but alive. His manservant Gerald examines his heart and suggests that he insert a new one into his body, going for the replacement from an entire wall full of glowing jars of hearts.

Analysis: Another solid issue of Nightwing is in the books, with a bit more forward momentum of the storyline this week.

Last time I opined that despite the lovely flashback, nothing much happened to propel the story further and Blockbuster was again left an ineffectual brute. Nightwing #93 picks up right where we left off, and Heartless is shown to bite off a bit more than he could chew. Blockbuster is less than impressed with him and nearly kills him. Now Roland’s claim to fame in the original Nightwing comics was that he was every bit as intelligent as he was strong, and that’s not been terribly on display in this run so far. He’s mainly been reacting and grumbling about Dick/Nightwing, not unlike a Saturday Morning Cartoon villain from the 1980s. But here, it does the character good to get one up on the new villain in town, even if it’s just a show of physical strength. It also fleshes out Heartless, who’s shown to not be supremely smart, over a year after he manhandled Nightwing pretty easily. This was a scene that was needed for Blockbuster’s sake, and it does well to give us more insight into Heartless, who’s been in the background for the majority of Taylor’s era.

Familiar beats from the run permeate Nightwing #93, but the scenes are enjoyable nonetheless. More Dick and Babs shipping, where Dick lets loose that he loves her and the two are momentarily embarrassed. I love how Babs plays it off, and it does feel like Taylor is setting them up to make things OFFICIAL official. Over in the pages of Batgirls, the two are just as close, if not even closer, so the romance is returning to the line of books rather than just one title. Back in the early 2000s, Devin Grayson had them together, and that carried over into other titles like Cass Cain’s Batgirl series. It seems as though we’re committing to that again, which is not only nice for shippers but also a welcome relief after the onslaught (in my opinion) of the Bruce and Selina romance, which Tom King made such an overbearing focus of his Batman run that I grew entirely sick of the idea by the time he left the main series and will be wrapping up in Batman/Catwoman next week. Dick and Babs have been a couple that DC for over ten years has aggressively steered clear of, despite numerous teasing, so to commit to their romance feels fresh and new, even though it technically isn’t.

My next question for Taylor and Bruno Redondo is if their past relationship and near marriage are still in continuity. Dan Jurgens referenced Dick’s proposal to Babs (which took place right before Infinite Crisis) in his run of Nightwing a year and a half ago, so is Taylor recalling the same? Continuity’s been an interesting thing because Taylor has largely acknowledged a vague history that’s also been non-specific. For example, we’ve seen a couple of flashbacks where Dick was Robin and Babs was Batgirl and knew his and Bruce’s secret identities, which tracks back to Batgirl: Year One and not the Pre-Crisis comics, referring instead to the Post-Crisis history. Also, there’s the idea that Bruce fired Dick, which occurred in Post Crisis, via either the re-telling of Jason Todd’s origin in Batman #408 or in Nightwing: Year One. But the late 90s and early 2000s are still kind of a blank spot. Nightwing #25 was referenced in the issue with Dick and Tim racing across trains, but the relationship between Dick and Babs was almost exactly like it is here – flirtatious but not concrete.

This isn’t bothering me so much, but I would like some clarification. Is Taylor operating on the idea that the two have never been together before? If not, why aren’t they together now? This isn’t his fault, it’s the fault of the New 52, Rebirth, and DC at large for messing with continuity over and over again. Still, I’m excited by all the teasing, because it seems like it’s full steam ahead for them to be together and stay together unless another writer and editor comes along and changes things, which could happen at any moment. Then again, this run is currently up for some Eisner’s, so if Taylor has his way maybe this will be the final word on this famous will-they, won’t they.

Lastly to speak about is the corruption angle of the BPD, which is intensifying in its resonance to current times. Someone online pointed out that one of the police vandals bears a resemblance to Tucker Carlson, and personally speaking, I’m less than inclined to resent that. Police action in America has rightfully been under the lens of formality, efficacy, and what they historically have stood for, and for Nightwing to battle corruption (again) in Bludhaven, the cops should be perceived as more than just ineffectual. Working as outright bullies for the mob sets up a solid antagonistic force for Dick Grayson, and the fact that it’s beginning to mirror reality in America simply speaks worse about the reality of police in America more so than any political agenda Taylor is indulging in. Don’t get it wrong, it is a political agenda, but one that’s absolutely relevant in our modern times. Superheroes have essentially been super-cops, so if Dick’s MO is more socially based then this was always necessary. It might become dicey for future issues, but in the here and now, it works.

Last note for Bruno Redondo’s artwork in Nightwing #93, the lettering *BANGS* being illustrated as the bullets zipping past Nightwing was a fantastic touch. The artwork in this series remains absolutely stellar.

Nightwing #93 picks up the pace from the previous issue, setting up some antagonistic forces in Dick Grayson's life that are compelling.