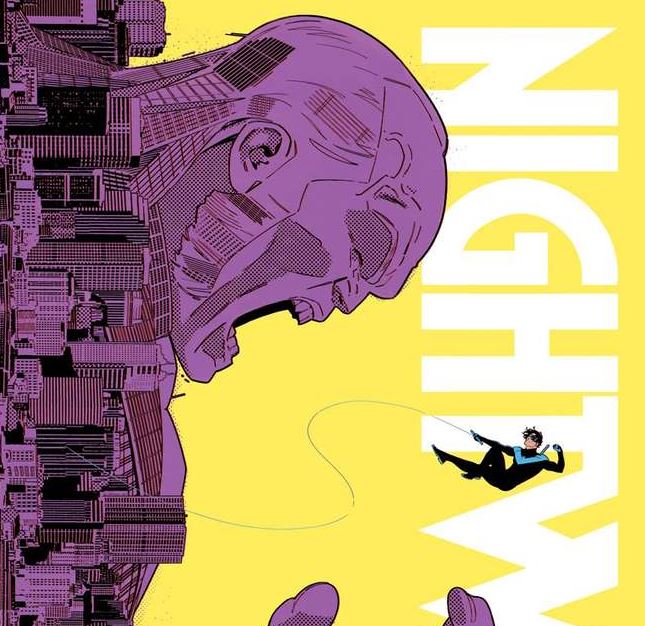 Overview: In Nightwing #94, things seem to be going smoothly in the war between Nightwing and Blockbuster…but who does the crime boss suspect to be a leak in his ranks?

Synopsis (spoilers ahead): As Nightwing #94 begins, the Attorney General interrogates one of the Blüdhaven City policemen who was unmasked destroying the Haven a few nights ago. Meanwhile, Mayor Melinda Zucco informs Commissioner Mclean that the FBI is on its way to pick him up. Mclean flees with a suitcase full of money and fake passports, only to be stopped by Nightwing, who takes out his car just as the Feds arrive.

Later that night, a press conference conducted by the AG and the mayor reveal the new Blüdhaven police commissioner to be Maggie Swayer from Metropolis. Blockbuster is less than thrilled with this news and heads to Melinda’s mother’s apartment.

Back at Oracle’s place, Dick and Babs are delighted with how their takedown of Blockbuster has progressed, allowing for a moment of kissing. Melinda gets a call from Blockbuster, who’s with her mother. She arrives, and the two drive to an undisclosed location, where she’s greeted by a tied and gagged Electrocutioner, who Blockbuster believes is the leak in his forces. He lets Melinda alone with him to gain information before killing him, upon which Melinda quickly unties the villain and calls Dick. Electrocutioner blasts her, alerting Blockbuster and revealing to him that she’s the leak.

Analysis: Nightwing #94 is the first issue of the run where it feels that Taylor’s presenting things from the villain’s perspective. I’ve opined in the past that his presentation of Blockbuster has been fairly weak, with his strong-arm tactics getting him nowhere and always being outfoxed and outsmarted by Nightwing and Oracle. And to be clear, I’ve no problem with brains beating brawn, but in the old days, Blockbuster was Dick’s Kingpin and just as much of an intellectual threat as Nightwing could be. In this series, he’s been mostly reactive and short-sighted. To be honest, it’s a critique that I’m finding myself less concerned with because we don’t often get stories where the heroes’ decades-long expertise is shown off with such aplomb. Dick and Babs are some of the best crimefighters and best sleuths in the DC Universe, they can’t constantly be on the backfoot. While it may hurt Blockbuster’s overall reputation as a heavy, I like the stream of issues of our heroes just owning the bad guy and staying three steps ahead.

The reason for that is here in Nightwing #94. Their weakness is Melinda, who would always be found out sooner or later. It’s really through her dumb luck that she hadn’t before, and it’s through her being dumb that she gets found out here. Now, I’m not one for seeing women get put in refrigerators or anything, but although I said I’m growing fine with Blockbuster routinely being beaten by Nightwing, we have a chance for a real moment of loss here. I’m not suggesting that Melinda be horribly killed to make Dick feel bad, but something has to happen to really let this war have stakes. A scar, an injury, a missing limb, something has to give. (Plus, we still have Heartless in the series, who killed off Gunhawk months ago.) A moment of emotional vulnerability would really make this story feel more intense because, as fun as it’s been, there hasn’t been much intensity since the first few issues with Nightwing and Robin first encountering Heartless and saving the kids. I would be pretty let down if, by the next issue, Dick just calls Wally, and the day gets saved before it ever needed to begin with. There’s got to be that Devin Grayson era element of desperation that really puts Dick through the ringer for this run to truly sing as one of the all time greats. Right now it’s very solid as-is, and easily the best Nightwing run since the Peter Tomasi days before the New 52. I’d even suggest it’s in the running for third best run under Dixon and Grayson. But it’s been coasting off of good vibes for over a year, and with the ending of this issue, we have a chance for a real showdown.

Dick and Babs kiss for the third time (by my count) in Taylor’s run, and with the two being very flirty over in the pages of Batgirls, I’m hoping we get some solid ground on where their relationship is. It’s interesting that the ship has been allowed to breathe and exist the moment Barbara stops being Batgirl and doesn’t have a title of her own. Since Rebirth, she was saddled with love interest after love interest, but now that TPTB have settled her back into the Oracle chair, she’s really been fixed with Dick Grayson consistently. I asked Tom Taylor (to no reply) what the history is meant to be between these two aside from former Batgirl and former Robin. I’m still wondering if they’ve been previously engaged, or if we’re supposed to treat all this romance as new.

This was a chapter of plot development with forwarding progression that works well for a good pay-off if given the chance. Very solid with no real problems, but the next issue will have more riding on it with how things have ended up for Melinda here.