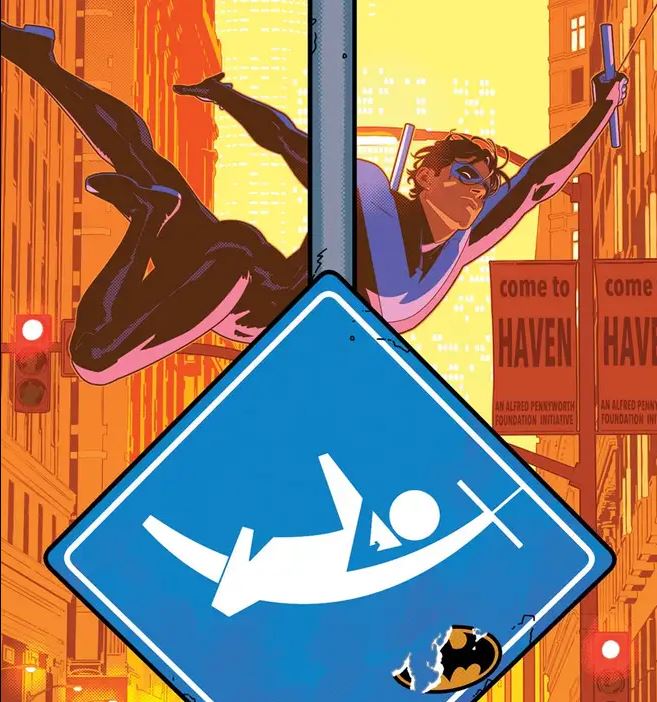 Overview: As the battle for Blüdhaven rages on, Nightwing brings in reinforcements while Blockbuster threatens to destroy the city in Nightwing #95.

Synopsis (spoilers ahead): In Nightwing #95, Mayor Melinda Zucco stirs from being shocked unconscious by the Electrocutioner, as she’s just in time to witness her rescue by Nightwing, who quickly takes down the aforementioned electric villain and Brutale. The half-siblings race outside and are greeted by Blockbuster, who’s then run over by Audre.

At the Blüdhaven Police Station, Commissioner Maclean is being questioned and reveals the existence of a tell-all file kept in his possession that has the goods on Blockbuster and Maroni’s entire operation. The interrogating detectives then murder Mclean and disappear. New Commissioner Maggie Sawyer demands to learn who was watching Maclean and finds herself stonewalled. Soon after, she’s met by Melinda and Audre, Nightwing and Batwoman, who ask for her cooperation in bringing Blockbuster down together and by the letter of the law. Maggie is wary of involving herself with Batwoman (the two were previously engaged, but Batwoman broke it off) but agrees to the heroes’ terms. Together with the Titans (Flash, Donna Troy, Cyborg, Starfire, Beast Boy, and Raven) and the Bat-Family (Batman and Robin, Spoiler/Batgirl and Batgirl/Cassandra Cain, Signal and Huntress), four of Blockbuster and Maroni’s criminal operations are shut down that night.

Blockbuster is incensed and resolves to draw Nightwing out by destroying the Haven with a rocket launcher. Nightwing and Batwoman arrive on the scene to help evacuate civilians before Nightwing runs into a burning building after hearing cries for help. He’s greeted by Blockbuster manhandling two of the Haven’s child residents. Nightwing disarms for the sake of the children, and Blockbuster then pummels him to the floor, sending his mask flying off and revealing his true identity as Dick Grayson!

Analysis: Things are definitely moving in this storyline, but there’s more of the same sense of a safety net with the characters that I hope isn’t there with every issue. Right off the bat in Nightwing #95, the very bad situation Melinda found herself in is instantly resolved. She wakes up unharmed and is instantly rescued by Nightwing. While it’s cool to see how quickly Dick arrived on the scene, Blockbuster and his goons seriously didn’t move her to another location? They knew he was on his way!

That’s just inattentive storytelling regarding the villain, and I have to conclude that Tom Taylor isn’t as interested in showing off Blockbuster as Nightwing’s ultimate bad guy because he’s garnered zero W’s this entire run. Roland Desmond is supposed to be at least impressively intelligent, but here he’s so reactive that it’s unbelievable. He could’ve gone back to Melinda’s apartment, threatened to kill her mother if Melinda didn’t spill the beans, and put Nightwing on a wild goose chase in threatening the only people closest to his family that he has. But he gets totally punked – again – and the ending scene at the burning library is just him being desperate. He seriously can’t think of anything else to do but react violently, not tactically.

It’s a big shame because it makes all of Nightwing’s moves against him feel like he’s playing a game in easy mode. I enjoy scenes where the DC Universe makes itself known by helping out everyone’s favorite superhero and bringing the hammer down on street-level thugs, but this doesn’t feel like a hard-earned win. I’m starting to wonder if the purpose of this arc isn’t a battle of wits between Nightwing and Blockbuster at all, but just a means to show off what Taylor loves the most about Dick Grayson. Recalling the flashback where Robin jumped into an unwinnable situation to save one person, I’m thinking now that it doesn’t matter if Blockbuster is as smart or as dumb as anything, as long as he’s an opponent for Dick’s heart to fight. In that case, Heartless should prove to be a far more formidable opponent if the theme of “hearts” carries over.

I did like Nightwing #95, though, especially the scenes with Maggie Sawyer. Finally, we get some stakes when Maclean is killed, which works great for the story. It felt like almost a Chuck Dixon move to demonstrate the filth residing in the BPD by revealing that there are rats not even other rats are aware of. It was also nice to have it presented as an obstacle for Maggie Sawyer, who’s simply in a bad mood throughout this story. I’ve not kept up with her history with Batwoman (although the real-world failure of them getting married is infamous and not-so-subtly commented on in this issue), but I did like how Dick was totally unaware of it. Bruno Redondo has a lot of fun showing off Maggie eyeing Batwoman while Nightwing is talking, which is fun character stuff. I also like Batman’s wordless involvement and that there’s not a whiff of him taking over Dick and Babs’ plans to assault Blockbuster’s crime spree; he’s there the same as all of the others, out of love for his son.

The ending is definitely curious, as longtime Nightwing fans will remember that Blockbuster learning of Dick’s secret identity led to the series of events in the first half of Devin Grayson’s run that infamously ended with Tarantula shooting Blockbuster dead and then having her way with Dick while he was in a state of shock (see our interview with Devin Grayson back in 2015 for more commentary on that). So this has simply happened before. Of course, with the continuity all wonky and in flux due to recent events in DC Metal Multiverse and all that, I’m not exactly wondering why this is happening again, but I am wondering if Dick remembers it. Is Tom Taylor putting Nightwing #93 out of continuity definitively with this?

This was a very solid issue with only one major gripe on my end - the limply rendered Blockbuster. Is the next issue the finale, or are we riding the saga to #100? Time will tell, and it'll tell pretty soon.