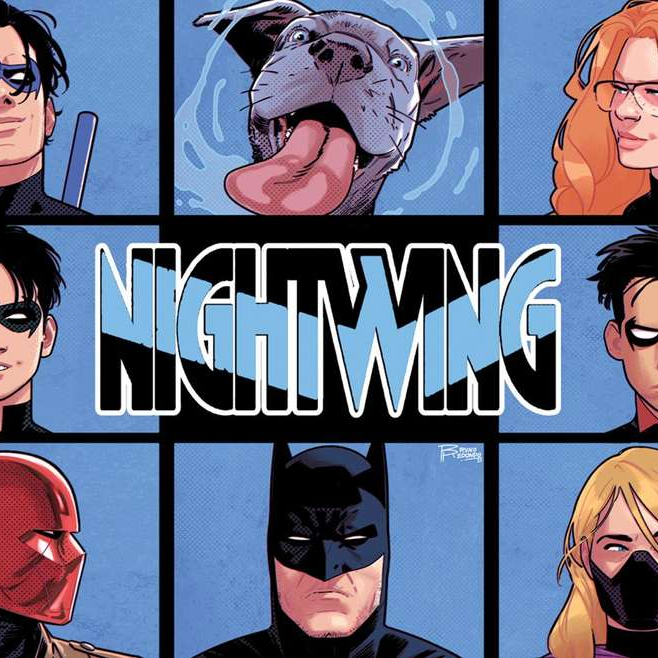 Overview: In Nightwing #96, the Battle for Bludhaven concludes with a stunning showdown between Nightwing and Blockbuster!

Synopsis (spoilers ahead): As Nightwing #96 begins at the Haven Library (currently on fire), Nightwing has just been unmasked by Blockbuster, who swears to destroy him and everyone he loves. As he calls for backup, Dick puts everything he has into pummeling Desmond amid the smoke and fire.

Outside, Electrocutioner, Brutale, and more of Blockbuster’s men arrive and are headed off by Batwoman and Batgirl (Barbara Gordon). Barbara presents the men with a laptop full of the pertinent information on their boss.

Back in the library, Nightwing outboxes Blockbuster and kicks him out the window. When he rolls to his feet, Blockbuster flees towards his getaway car, but Electrocutioner and Brutale suddenly refuse to help him. Turns out Batgirl (Barbara Gordon) informed them that the Bludhaven Private Prison where they spent some time was created by Blockbuster. They drive off, swearing never to work for Desmond again. Blockbuster continues to run, and Bludhaven appears to be safe at last.

In the ruins of the Haven Library, Dick broods that since his identity is blown to his hated nemesis, he and Barbara can’t be together since she’ll be at risk in her personal life. Barbara laughs this off, reminding him that life in the DC Universe is always dangerous and that nothing will stop her from being with Dick since they are both allowed to be happy.

As they kiss, we cut Blockbuster being confronted in an alley by Heartless. Armed with a heart-stealing cannon, Heartless concludes that since Blockbuster has clearly been defeated, he doesn’t need his heart anymore. With Roland Desmond’s gorilla-sized organ now in his possession, Heartless turns to Bludhaven to enact his plans to take it from Nightwing.

Analysis: The Battle for Bludhaven is finished, and with its conclusion in Nightwing #96, I’m left sitting on much of the same thoughts I’ve had throughout the arc, now more solidified than ever before.

Overall this has been an enjoyable story that ends here in Nightwing #96, but I’ve got to say everything I’ve felt during the lead-up has borne the same result at the story’s end. This isn’t the hardest victory or toughest battle Nightwing and the Bat-Family have ever had. Tom Taylor’s rendering of the DC Heroes’ competency is commendable, especially with the love and adoration of these characters fueling every issue. But there’s hardly been a moment where he actually wrote Dick in a corner.

His apartment got blown up? He saves everyone before the bombs go off.

Investigated by the Bludhaven police? Barbara’s a phone call away to get them to leave.

Oracle is kidnapped? The Flash is right there to get her back, no problem.

Dick Grayson has assassins after him? The Titans show up to tell Blockbuster to stop it.

The reason why Blockbuster is historically Nightwing’s most fearsome enemy is that he really kept Bludhaven as a cesspool worse than Gotham City, and Nightwing had no Batman-esque reputation to use against police corruption and super criminals. He had to start from the ground up. Key among the odds was that he was all alone. Sure, Oracle helped him from time to time, but Dick’s solitude away from Batman was a key point. He chose not to rely on his connections as he thought Bludhaven deserved a hero all on its own who could stand up to anything.

Now the difference between Taylor’s Blockbuster arc and the arc by Chuck Dixon and Devin Grayson is that Taylor’s Bludhaven is chiefly concerned with the little people. It’s a very 21st century, millennial-focused, leftist take on the city because with Bruno Redondo’s art Bludhaven has never looked like that bad a place. The Bludhaven as drawn by Scott McDaniel looked like Hell on Earth. It alone was a scary city for a lone, unpowered hero like Nightwing to reside in, and every issue looked to be a challenge for him to race across the rooftops. With Redondo’s Bludhaven, it’s diverse, you’ve got Marv Wolfman and George Perez pizza stores everywhere, and the streets are clean. It does the job of making the city worth saving, which is a good thing, but it also pulls against the idea that Nightwing has to try as hard to wrestle it away from Blockbuster’s control.

I’m very split because I have been and still am enjoying this era of Nightwing. It’s an era that clearly loves its hero and these characters and wants to show them in the best light. But it also reads as too precious and light of touch. The biggest threat felt in this run was when Blockbuster learned of Melinda Zucco’s connection to Dick in Nightwing #94. It was a solid cliffhanger, but how does that get resolved? Nightwing arrives in time to save her before a hair is harmed on her head. The cliffhanger led to a non-event that might as well never happened at all.

I think I’ve made my point clear. While the run is a positive, colorful, happy run that loves everyone involved, it doesn’t work nearly as well as a dramatic story. Does that matter? Too many of the Bat-Books have historically been dour, dark, and depressing slogs of villainy and hopelessness, why shouldn’t Nightwing buck that trend? I think there is a multitude of ways to present a lighter book, that can still provide adequate suspense and thrills without going all the way in the other direction.

I think the last thing to comment on is the affirmation of the Dick and Babs relationship, which has been firmly entrenched in this era and supported by Dick appearing in Batgirls. Will there be wedding bells coming soon? Maybe, maybe not, but I’m hoping that we don’t get a whiplashed return to the form of another writer or editor breaking them up anytime soon. Dick and Babs should be happy together, and it’s weird that for over a decade no one at DC Comics believed that. I like Babs assuring Dick that they can be happy and also crimefighters in Nightwing #96, as Dick’s depressed concern over it felt like an extension of Bruce. Babs is there to flush all of that doubt out, it’s solid character work.

I do like this run, I truly do. It's just a bit of a letdown that Blockbuster's fall was - at the end of the day - not that big of a deal when Nightwing can call in a favor from anyone and everyone he knows at a moment's notice because that robs the stakes for future adversaries. Will Heartless be a far darker, more immediate threat? We shall see...