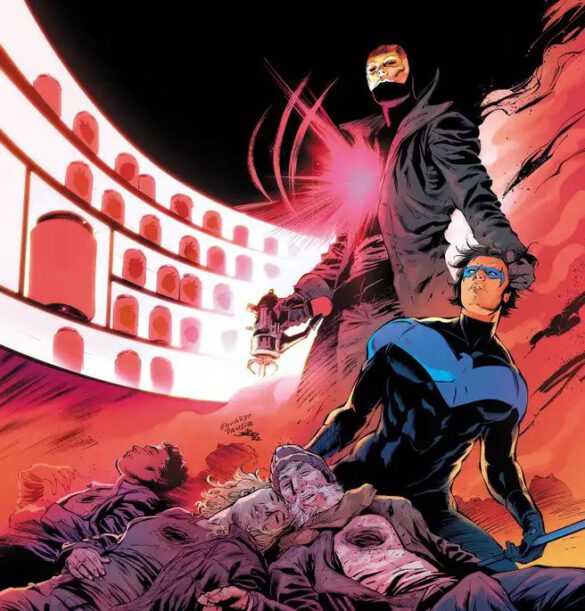 Overview: In Nightwing 2022 Annual, the secret origin of Heartless is revealed along with adventures with Bite-Wing and Superman.

Synopsis (spoilers ahead): Nightwing 2022 Annual begins with a flashback sequence, as a man calling himself “Gerald Chamberland” tells the tale of arriving at the billionaire home of the Lyle family to butler for the husband, wife, and troubled son Shelton. Shelton is a mute child with a propensity to inflict harm on animals.

Unlike Shelton’s parents, the new butler Gerald also has a knack for violence, having murdered the real Gerald Chamberland on his way to America from London, along with stealing the man’s identity. Together, Gerald and Shelton explore each other’s fascination with violence until, one day, their travels took them to the fateful final performance of the Flying Graysons. Shelton was utterly awestruck by the deaths of John and Mary, and this set him on a path of evil ever since.

When Gerald rigged their family helicopter to murder the Lyles and leave Shelton with their inheritance, Shelton was mistakenly in the chopper with them. To survive, an operation was done for him to gain his father’s heart. Over time, the two men grew obsessed with replacing body parts with cybernetic enhancements. This led to Shelton becoming Heartless, who is now dead-set on replacing both Blockbuster and Nightwing as the king of Blüdhaven.

In the second story in Nightwing 2022 Annual, some time ago (specifically before Blockbuster blew up Dick’s apartment building), Dick and Babs go on a date, leaving Haley alone. Unfortunately, they’re captured by Mr. Freeze, Poison Ivy, and Catwoman. Luckily, Haley arrives in costume, frees his owners, and is honored by Mayor Melinda Zucco. However, this all turns out to be a daydream, as Dick and Babs arrive home to see Haley having destroyed everything in Dick’s room.

In the final story sometime later (after the events of Superman: Son of Kal-El #9), Jon seeks out Nightwing to help train himself to better use his powers in ways that won’t hurt anyone vulnerable. Nightwing recalls some of his earliest days of training and works to figure out how Jon can operate both offensively and defensively without harming anybody. He preaches time, patience, and forgiveness in oneself. Despite what we believe are Dick’s memories, he tells Jon that he owes his years of experience and advice to his tutelage under Batman.

Analysis: Another solid story, and one which benefits from not taking place in Dick’s perspective for a change.

I like the angle Taylor takes with Heartless, having the whole operation be a veritable father-son duo with an echo of Batman as “Gerald” is his family butler. Having him narrate the story was a nice touch, and I like the angle that the killer grew to love the boy honestly, and they two came up evil together. It’s a neat tale, and I hope the conclusion of this saga doesn’t do away with them as villains. For the first time in a long while (as I haven’t really loved any of the new Nightwing villains since the New 52 if I’m being honest), we’ve got a real genuine take on a Nightwing enemy.

The one thing I’m unsure about is having yet another person present at the death of the Graysons. If we think back to not only Bruce, Tim, and probably Alfred, there’s also been Raya Vestri from the New 52 and any number of other characters peppered throughout DC history, having been there for the birth of Robin. More than that, it’s a hacky thing to have a new character somehow present at the origin story anyway, at least in my opinion. It forces importance on both the characters and their relationship with the hero unnaturally because why haven’t they been mentioned by now? Yet, I was wondering if there were any other ways for Taylor to tell this story, like having Shelton see it on the news. His being there really does work, and so far, we don’t know that he knows that Dick/Nightwing are one and the same. It’s the only element of the story I don’t love because otherwise, Heartless works as a new DC villain and not just for Nightwing. Sticking him in the origin during his own is just…I don’t know. Does anyone else like that?

The backup stories the amusing enough. I rankled slightly with the Superman story because it used the cliché of presenting Nightwing as the antithesis of Batman by having him be more positive and wholesome compared to Bruce’s teeth-gritted coldness. That element was more art-dependent than the writing itself, but the “trust no one” thing I had a big difficulty with. I get that if Bruce is being honest with Dick in training him, it’s a good policy, and also informs Dick’s growing network among the DC Heroes as being the most trustworthy character, but it can’t help but make him seem as that paranoid psycho lots of writers love to see him as. Batman, in his early days training Robin, shouldn’t be as intense as he would later become after Jason Todd dies; I’m very strict about that. It’s just too common to write Dark Knight Returns Batman (who wasn’t even that nuts, to begin with) throughout the entirety of his career and not simply at specific points. But I’ll admit, it’s more a personal problem I have rather than a flaw with the writing.

Solid scripts, very solid artwork, and a really good origin for the new villain. Fun stuff all around.