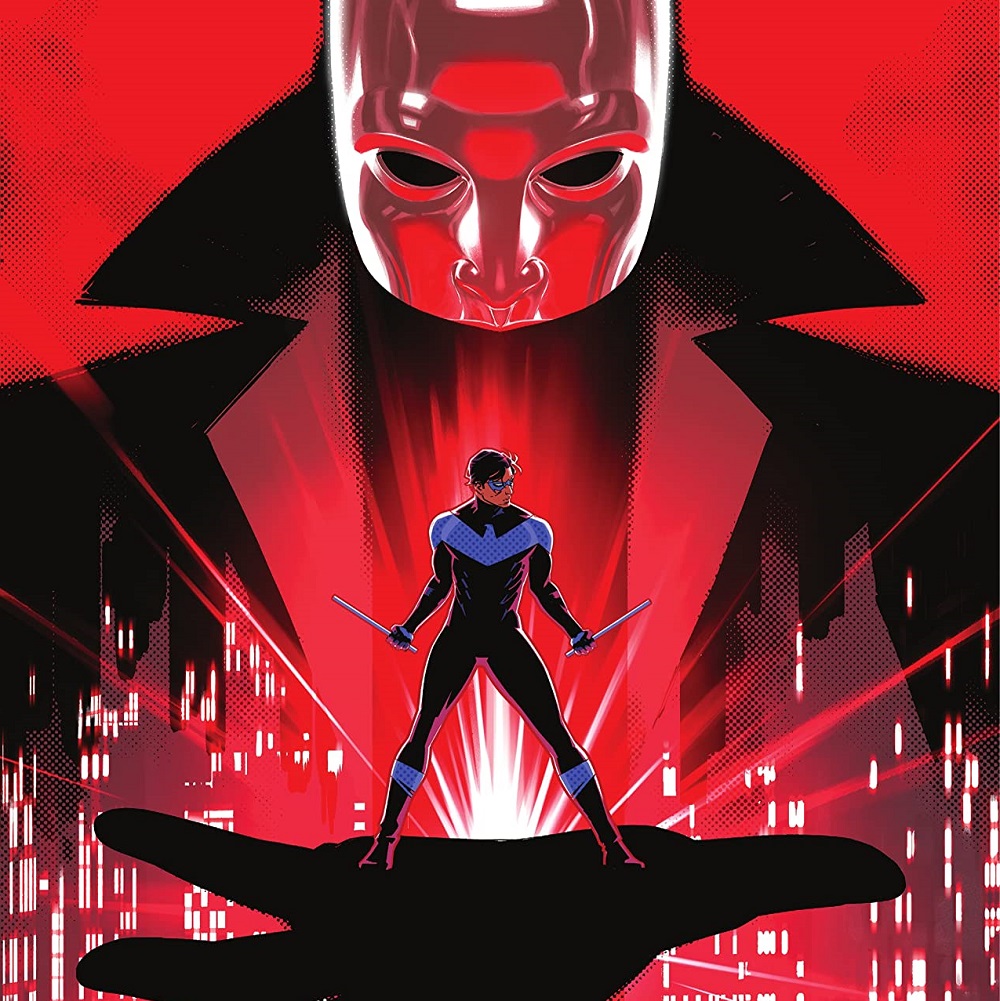 Overview: In Nightwing #81, Nightwing and Robin battle to protect Bludhaven’s children from Heartless, as Oracle discovers the secret of the city’s new criminal mayor!

Synopsis (spoilers ahead): Nightwing #81 begins with Melinda Zucco sworn in as Bludhaven’s new mayor and Blockbuster demanding to be let in on her plans for the city.

Meanwhile, back at the pier, Nightwing is confronted by the villain Heartless, who set the homeless children’s tent house on fire. The kids flee to the pier with Robin (Tim Drake), but as Nightwing starts to get the edge on Heartless in combat, Heartless blows up the edge of the pier, trapping everyone in the middle of the encroaching flames. Desperate, Nightwing has Oracle patch his radio feed into the Maritime Distress Channel, calling for the help of the city’s docks patrol. To everyone’s pleasant surprise, they arrive in the nick of time, just as Dick passes out from blows to his vulnerable head.

He awakens back in his apartment, where Oracle informs him of the city’s new mayor and her ties to the Zucco and Maroni crime families. Unable to rest, Dick suits up and investigates Zucco’s apartment, quickly getting knocked out again by Zucco and her bodyguard. A short time later, Nightwing awakens just as Zucco unmasks him, recognizing him as Dick Grayson. He charges her, saying that he knows she’s the daughter of his parents’ murderer. She protests, saying that Zucco was not her biological father, ending the issue by claiming her relation was to John Grayson.

Analysis: After three issues of joyfully re-familiarizing ourselves with old friends, Taylor and Redondo take the plot and Nightwing’s world into new territory, although the outcome has yet to be fully realized. As said before, returning to Tony Zucco via a heretofore unknown daughter has been done before, but now we’re in a zone that recalls the Scott Peterson run of Gotham Knights where, for a time, Bane was thought to be the half-brother of Bruce Wayne by way of Thomas Wayne’s affair (turned out to be King Snake). By the end of Nightwing #81, I was unsure. The set-up with Melinda was different than Sonia Zucco in that she was connected to crime, but all the same, there isn’t a need to bring back Dick’s origin to the forefront of his mind. Dick has gotten over his parents’ deaths, not completely but in a way more than Bruce has. I like to think it’s because – Marv Wolfman writing aside – Dick’s typically older than Bruce was when he lost his parents. He’s also enjoyed a support system far more consistently and healthily as he grew up than Bruce did. So where would a long-lost sister fit in Nightwing’s world?

Additionally, Melinda is now connected to the Batman world thrice over: she’s the daughter of both John Grayson and Tony Zucco and was raised by the Maroni Crime Family. Boss Maroni is infrequently dead (I believe he showed up an issue or two ago in this run) but also is only a catalyst to create Two-Face, so there’s not really a character to enrich or utilize there.

Finally, it is all a lot to ask of the readers. Taylor is pacing this story well by not deluging us with new characters, spending a great amount of time with Dick, Babs and later, Tim. But all of a sudden, not only does Tony Zucco’s daughter – Mayor of Bludhaven – know who Nightwing is, but Dick might also be her sister? There’s hardly any time to process this information, and we don’t know much about Melinda to begin with.

I really hope Taylor knows what he’s doing. On the face of it, this reeks of a trope writers do to make sure their run is kept in stone by remembering major characters introduced into the narrative. Sometimes it doesn’t work, Higgins introduced Sonia Zucco and she’s never been brought up again. Melinda might end up being really cool, but it’s a tightrope act (pun intended) on how to balance this kind of revelation. Honestly, I wish him luck.

Otherwise, Nightwing #81 was still solid. The action was solid, with Dick being vulnerable but still experienced. He should have little trouble dealing with new villains, as his experience should trump theirs every time. Babs’ Batman-slapping-Robin meme shirt was amusing if a little rude, but it fits with this run’s use of memes. The list of names manning the rescue boats contained various creators from past runs including Devin Grayson, Dan Jurgens, Tim Seeley, Javi Fernandez and Rick Leonardi. A good selection of writers and artists, especially as Wolfman and Perez have been overdone (and were already featured in Nightwing #79) and Dixon is usually the third most referenced.

It's a solid issue. Nothing much wrong with it once again. But the reveal has me antsy. Tom Taylor knows Dick Grayson in and out, but does this new character have a place in his history? Is there more to be revealed? Can he pull it off? I hope so.