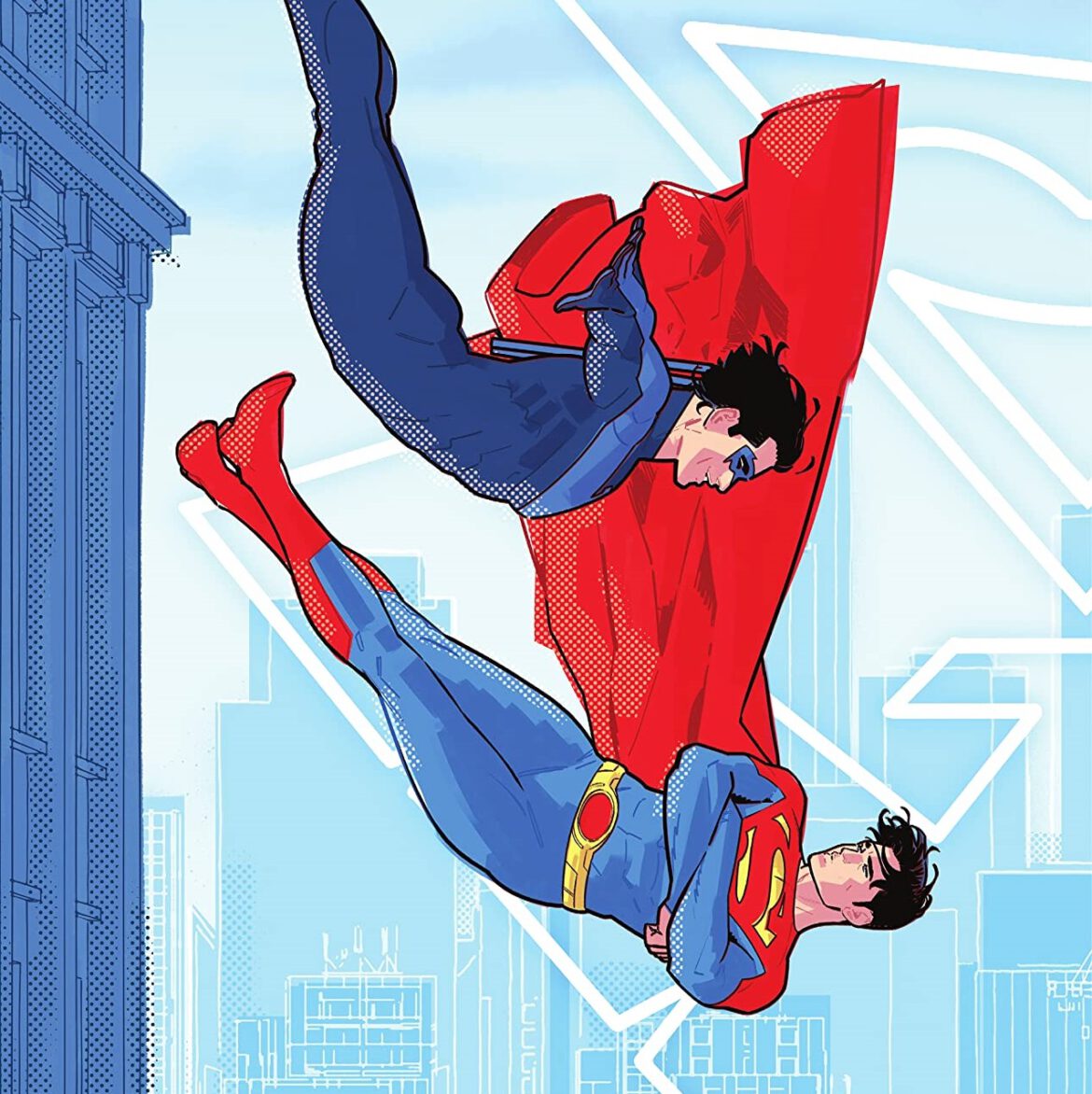 Overview: In Nightwing #89, Dick Grayson teams up with Jon Kent in this crossover adventure with Superman: Son of Kal-El!

Synopsis (spoilers ahead): Nightwing #89 begins some time ago, as Batman and Nightwing went after a missing Jon Kent, the young superpowered son of Superman. Finding him hidden in a cave, Nightwing engenders trust in Jon by unmasking both himself and Batman. When Superman arrives, Batman lends advice that although the fear over loved ones will always be there, one has to learn to trust that their family will be okay.

In the present, Jon Kent is Superman. He’s mourning the loss of two lives during an attack on Metropolis (see Superman: Son of Kal-El #7-8) and fears he won’t be able to do better in the future. Returning to his boyfriend Jay Nakamura, the two go to meet the investor for Jay’s TRUTH journalism company – one Dick Grayson. The three are alerted by superpowered teammates Aerie and Wink that the former Teen Titan Risk was found drowned in Metropolis Harbor. Dick covertly messages Jon to join him in the investigation as Nightwing, where at the murder site the two are informed by Oracle that more superheroes have been recently killed across the world. Deducing that the attack on Risk was done by a person or persons who were flying, Superman traces the energy signal to Lexcorp.

Analysis: We are now firmly in the Tom Taylor run of Nightwing, about a year after he first joined the title and made this book the most likable superhero comic on the proverbial stands right now. The collected edition of the first arc is in bookstores and we’re in a genuine crossover with Taylor’s other ongoing series, Superman: Son of Kal-El. I write all this to illustrate that at this point, you know what to expect in terms of reliable quality from this title. Along with Bruno Redondo, Adriano Lucas, and Wes Abbott, this has become such a solid series that every issue is a pleasure, and every review becomes an exercise in finding excuses not to give it a perfect score. Speaking personally with no relation to the other reviewers on this site, a perfect 5/5 would mean going above and beyond, entering a running for best issue of the year. I’ve only given this book a 5/5 once, but the consistency and constant enjoyment make it a 5/5 series, even if the average score is 4-4.5.

We come to Nightwing for great characterization, and the opening flashback sequence in Nightwing #89 with a young Jon and New 52 (or is it Rebirth? Batman is in his 2016 suit) Dynamic Duo is wonderful. Typically flashbacks with Bruce and Dick are shown to either illustrate the good old days of the Golden and Silver Age Batman and Robin team or to present the history of turmoil in their relationship. Even from an era I don’t typically love, I liked seeing the two of them just be the classic team, meeting the challenge of rescuing a Kryptonian kid as only they would. The page where Dick quickly assesses that Jon would be scared of Batman and Nightwing, and goes into the cave unmasked is a great move and it continues with gags of Bruce carrying candy in his belt next to smoke bombs and Clark making a joke about it. Taylor gets these characters so correctly, that while it’s arguably fan service, I’m having too much fun to care. And honestly, the books need this kind of fleshing out. I’ve written about this before, but one of the angriest scenes I’ve read in Nightwing was the start of his Rebirth book, which had Batman drop a guy off a roof to show Robin that criminals must fear them. It was indicative of a misunderstanding in how to write these two characters. Batman can’t calm down children as well as Dick Grayson or Superman can, but he does have different methods for doing so. Tons of character work done in a few pages goes a long way for me here.

The rest of Nightwing #89 is a fine set-up for a crossover murder mystery. I did have to seek out Superman: Son of Kal-El #7-8 to gain context for what was bothering Jon going into this story, but that was no hassle. The scene with him in the Fortress talking to a hologram of his father was well illustrated by Redondo, with Clark in his normal clothes but still looming large over the young Superman. He sounded like Clark, but the fact that he wasn’t, came through just as soon for us readers as it did for Jon.

Seeing Dick and Babs sleeping in bed together in Nightwing #89 was at once both a nice bit of obvious “Of course they would” storytelling, but also a nice surprise because DC has conspired to keep them apart for so long.  But we get more gags of memetic promotion with Barbara wearing Teen Titans GO! pajamas and Dick keeping an Escrima stick close to his bed. Part of me worries that Barbara’s becoming too much like a supporting housewife, but A) she’s in so many other books that it’s the only outlier of that, and B) I much prefer her giving Dick words of encouragement rather than yelling at him, which she had done for years and years. Nightmares of Batman #3 (2011) come to mind.

The major event to discuss was the death of Risk, who for those unfamiliar was a leading character in the Dan Jurgens era of the Teen Titans from the 1990s. Risk famously got his arm ripped off by Superboy Prime in Infinite Crisis, so nice bit of detail with him having a robotic limb. Part of me is unsure about killing him off so dispassionately, but at the same time, you can’t put your hand on your heart and say he was ever a major character. At the time of this writing, I haven’t even read the Jurgens run myself (yet), but I still mourn a former leading hero of a book for the sake of it. I liked Nightwing’s regarding of Cody, saying that he didn’t know him well but he was still a Titan, so he tells Oracle to alert the others.  It should also be said that this is the second Jurgens Titans member killed in so many years, as Joto/Hotspot was among the list of dead in the first issue of Heroes in Crisis, which at the time of this writing is still roughly in continuity, even though it’s been retconned a couple of times by now.

This is a near-perfect issue, only lacking the little bit of extra to put it over but still worth every penny all the same. And that's how this book has been for a long time. Cut the check.