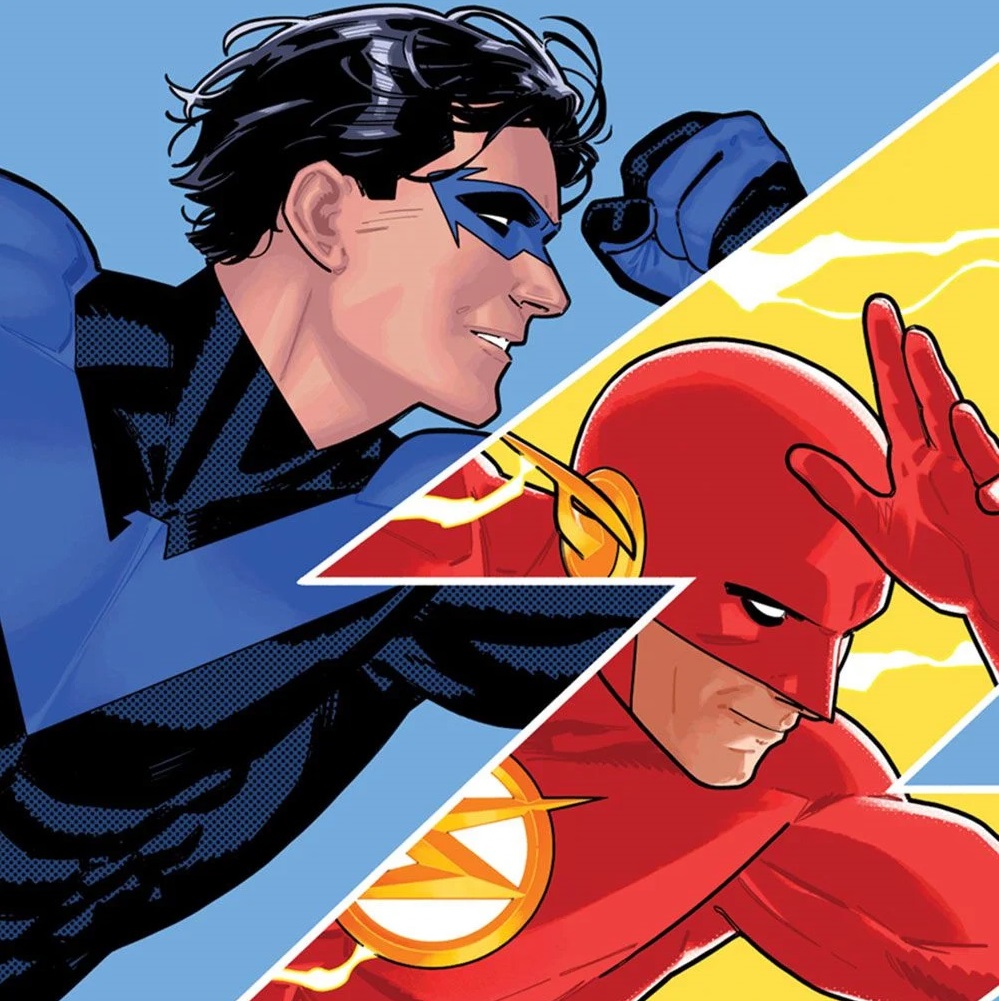 Overview: In Nightwing #90, when yet another attempt is made on Dick Grayson’s life, a Titan ally will come to his aid in a flash!

Synopsis (spoilers ahead): As Nightwing #90 begins, the criminal Blockbuster has gathered several assassins, the chief of Blüdhaven police, and Mayor Zucco to his office and announced his latest hire to take out Dick Grayson: La Agente Funebre. Zucco refers to her as a myth, while Blockbuster replies not a myth, just an expensive hire, and one who cares not about collateral damage.

At 12:42 a.m., Dick gets a priority message from Melinda that someone is planning to destroy his apartment complex. He hurriedly awakens his tenants and rushes everyone out of the building, returning as Nightwing to rescue a neighbor in need of a hearing aid. Elsewhere in Keystone City, Linda Park is awakened by the news of a big explosion in Blüdhaven. Her husband Wally West races to the scene as the Flash only to find Nightwing alive and well. Understanding that this was the latest in a long line of assassination attempts, Flash takes matters into his own hands and brings Dick to his home in Keystone, far away from where anyone would know to find him.

Back in Blüdhaven, Bridget Clancy is told by the chief of police that Blockbuster has offered shelter in a paid-for hotel for the tenants of Grayson’s apartment complex. He tips off that Grayson must’ve been warned and that there’s a leak in their organization.

The next day, Dick, awakened by Wally and Linda’s twin children, finds Wally arranging a list of villains who would and have tried to kill him. In Gotham, Barbara Gordon is kidnapped and put in the back of a van. She alerts Dick and Wally, who agree to prevent more risk in Dick’s loved ones by replacing Babs in the van with Flash and Nightwing. When the van reaches its destination, the two Titans find none other than the KGBeast awaiting their arrival.

Analysis:  As I wondered in the review for Superman: Son of Kal-El #9, Nightwing #90 following the two-part crossover does not continue the superhero killer storyline, as we are right back in the “Get Grayson” saga for this book. I was curious if Bruno Redondo was going to pull triple duty, but we’ve got Geraldo Borges filling in. It’s similar enough to Redondo’s art (doubtlessly helped by Adriano Lucas’ colors), but the inks are chunkier, giving the linework a grittier feel. It’s fine, serviceable, and definitely understandable after Redondo’s guest art on Superman, but I am looking forward to his return.

Nightwing #90 is another one of those Taylor issues where I definitely get the love and affection for these characters, but I’m also wanting a meatier story to push things along. Blockbuster’s really not been very good at this assassination thing, attacking Dick publicly, loudly, and with broad swings. He’s got to be the big bad for a reason, and so I kind of wish these huge misses go somewhere with his character. Either he learns of Dick’s secret identity (again), or someone more threatening could take his place. Could that be Heartless? La Agente Funebre? I don’t know, but so far his involvement in the story has not been a great showing for him.

It makes the overall arc of Dick in danger and trying to help the city feel very simplified. Obviously, much of this run is patterning itself off of Chuck Dixon, but I wish Taylor would pay better homage to Dixon’s storytelling strengths. The Blockbuster mafioso storyline in that run was intricate, unpredictable, and intense. Nightwing would foil Desmond, but survive by the skin of his teeth, drawing the two antagonists closer and closer together with each near-miss. With this title, Blockbuster’s been repeatedly humiliated, and this doesn’t seem to have much of an effect on his ego or sense of self-worth. A hero must be as good as their villain, and if we’re bringing Desmond back from the dead for this sense of familiarity, he’s also got to be a lot scarier than he’s been depicted. By this point, he’s pretty much been a joke.

It’s fun to see Dick and Wally together again. The two had a nice spotlight issue during Rebirth, and their relationship as sidekicks who’ve made good it is always fun to see represented. There’s been a ton of upset with Wally’s personal life in the last couple of years, and I would’ve liked to see Dick reflect upon that more. Maybe a single page of how he had forgotten Wally existed and all the stuff with him getting his family back. We’ve had flashbacks as recently as the last issue and earlier with Bruce, Tim, and Babs. Maybe that’ll come in the next issue, just to flesh their friendship out more for the uninitiated.

I think my hang-up is that things have been too easy for the sake of having fun with these fan-favorite characters. It’s all got to be in constant motion. I like Barbara easily being able to free herself from a kidnapping and Nightwing and Flash easily able to replace her with themselves in a van, but there lacks a sense of urgency with this assassination plot. Dick’s got to be more proactive in rooting out these assassination attempts, especially now that they’re endangering other people. He’s been acting like just having a target on his back is an inconvenience he can live with, but why not stamp it out? It just allows the continuing plot to happen for reasons that are getting stretched thin.

Every few issues there's something that Taylor writes that showcases a slight weakness in his scripting. This isn't a bad issue, but it's indicative of the run's failures as a whole, and I'm hoping it actually leads to a place that's more thoughtful conceptually. It can't all be ice cream and sprinkles for Nightwing; he's got to struggle a lot more than he has been.