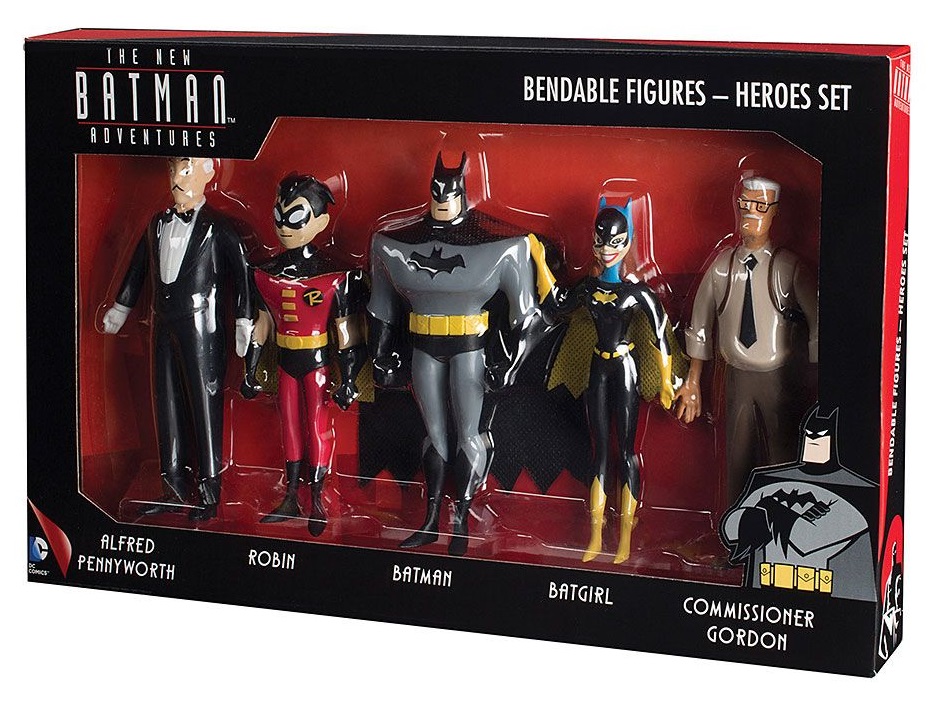 Who here loves Batman figures? Now, what if those figures were based on the designs from Batman: The Animated Series? And if I said they are also BENDABLE?! If you’re like me, you are dying to see those wonderful toys. Entertainment Earth has posted pre-orders for a wide variety of items from NJ Croce Company that will satisfy your poseable figure needs. Let’s start things off with the World’s Greatest Detective himself, Batman. The Batman: The Animated Series Batman 5.5″ Bendable Figure looks just like his cartoon counterpart and features a cloth cape. Slated for a June 2019 release, the figure is priced at $7.99 and can be pre-ordered now. Oh, you want a Dynamic Duo instead? Well, look no further than the Batman: The Animated Series Batman & Robin 5.5″ Bendable Figures set.  Featuring both Batman and the Dick Grayson version of Robin as seen on the animated series, this set is perfect for Bat-Fans of all ages. Slated for a June 2019 release, this set is priced at $14.99 and can be pre-ordered now. Do you prefer a more Batman family structure? Did you like the designs better during The New Batman Adventures? Then you might prefer The New Batman Adventures Heroes 5.5″ Bendable Figure Box Set.  This boxed set includes Batman, the Tim Drake Robin, Batgirl in her black costume, Alfred, and Commissioner Gordon. All are styled after their New Adventures look, plus where else will you find Alfred and James Gordon? Slated for a July 2019 release, this set is priced at $31.99 and can be pre-ordered now. The ladies of Gotham City haven’t been left out either. There is also a The New Batman Adventures Gotham Girls Bendable Action Figure Boxed Set.  This set features Batgirl, Catwoman, Poison Ivy and Harley Quinn. All four are styled after their sleek New Adventures redesigns. Slated for a July 2019 release, this set is priced at $32.99 and can be pre-ordered now. Finally, we end on a lighthearted (and somewhat cute) note. The Joker 4″ Action Bendable Figure is the perfect playtime pal. Featuring a unique design by Jason Meents, this Joker figure can bend into whatever position you choose, as well as grip small objects and accessories. Slated for a June 2019 release, this figure is priced at $7.99 and can be pre-ordered now.