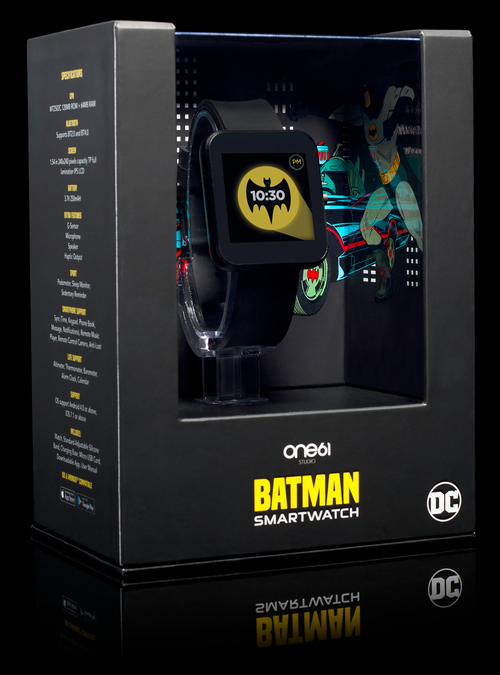 One61 Studio, a division of Bioworld, has announced that they are revealing a collection of smart watches based on DC characters at this year’s Consumer Electronics Show. Below is the official announcement. No word on a release date or price, but details should be coming soon. This week, One61 Studio, the technology division of Bioworld Merchandising, Inc. pioneering the future of pop culture apparel and accessories, announced its new Smartwatch collection set to launch at the 2018 Consumer Electronics Show (CES) in Las Vegas, January 2018.

The Flash Smartwatch hourly move reminder consist of “metahuman alerts,” while the Joker can be defeated by meeting daily step goals with the Batman watch. With each version of the watch fans can also unlock characters from The DC Comics universe by reaching or surpassing milestones.

One61 Smartwatches fully integrate with both Android and iOS operating systems, allowing wearers to answer and ignore calls, as well as access contacts and view call and message logs. Other key features include, sleep monitoring, hands-free music control, phone finder, and camera control with an interactive experience woven into each one.

“There are plenty of smartwatches out there, but none that are gamified or offer fans a fully-immersive experience featuring their favorite superheroes,” said Michael Donato, One61’s Director of Wearables Development.

The One61 Studio Smartwatch collection, set to debut at CES in January 2018, is just the first of the many to come. Rick and Morty fans can look forward to a smartwatch featuring their favorite cartoon characters in the future.

Become a Joker Goon with New Luggage from...