Review: The Other History of the DC Universe #4 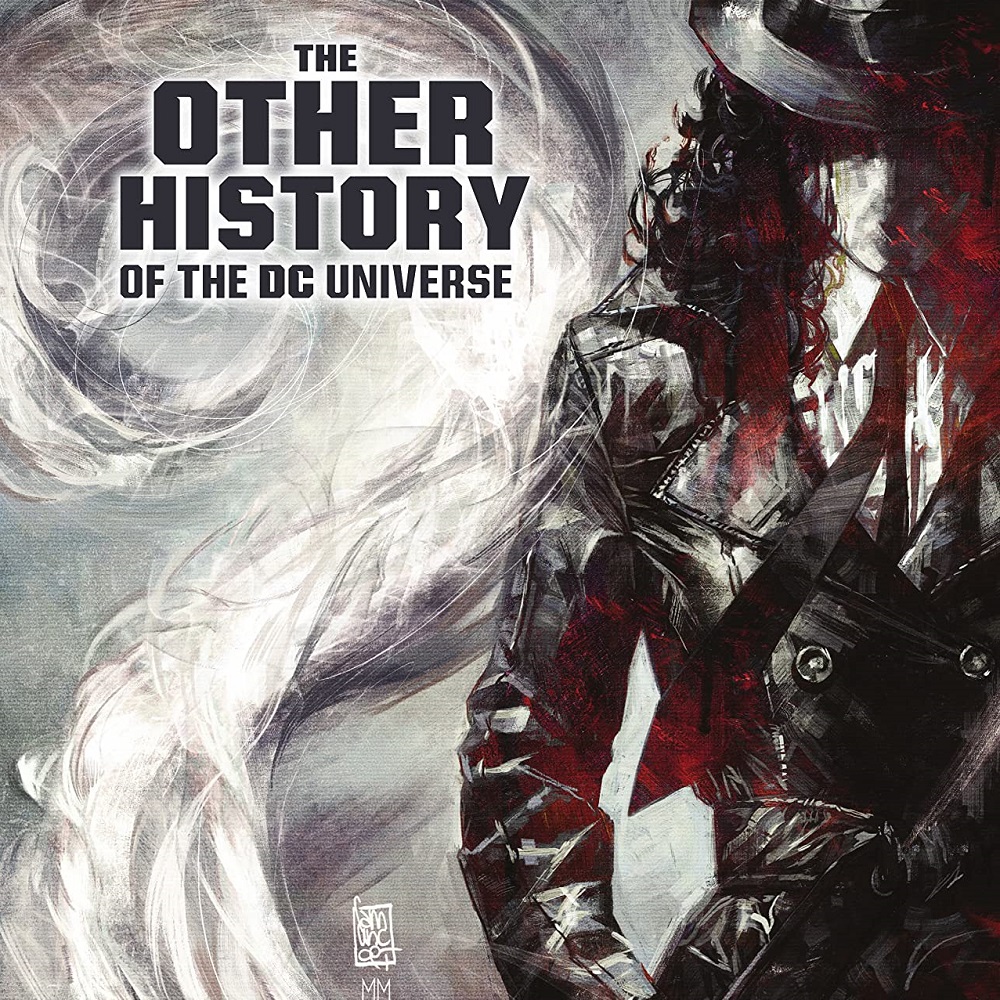 Synopsis (spoilers ahead): Overall, The Other History of the DC Universe #4 is less of a story and more of a memoir of Renee Montoya, a lesbian Catholic, a cop, a lover, and a vigilante.

This story is bookended with faces.  The opening shows the face of Renee Montoya.  She describes her family as a conservative Catholic family that she fears will not understand that she likes girls more than boys.  She describes her feelings of isolation and having to create a persona that would be acceptable to her family, her church, and her peers.

She describes the class system of Gotham.  It consists of the upper class who are the rich overlords of the city who strive to keep their wealth, the lowest class which labors to hopefully obtain that wealth for themselves, and the middle class in the city which strives to maintain order.  Renee decides to occupy the middle class, run by the white colors and manned by the Blue Colors consisting of the Gotham City Police Department run by one Commissioner Jim Gordon who strikes a partnership with the vigilante Batman.  In order to fit in with the cops she decides to behave as if she was a straight white man.  She has to create a mask to help her survive where minorities are not wanted or respected.  She grows to resent the Batman and his allies as individuals who do not operate under civil rights or due process.  She does understand that she might just be jealous that these people can thrive in her masks while she slowly dies inside.

She recounts her rise to the Major Crimes Unit and her partnership with Harvey Bullock.  She sees him as a cop who straddles the line but in his heart he is a cop even though he does act more like Batman than the police.

She tells us about her first love, Daria and how she became a couple with her in secret.  No one knows that she is gay except for her brother Benny.  She tells us about the chaos of No Man’s Land and how the police became a gang themselves to stay alive in the forsaken city of Gotham.  She focuses mainly on Two-Face and his strange one sided romance with her when she places herself between Harvey Dent and Batman.  She does not love Harv but she understands him.  Harvey has other ideas.

She describes when the quarantine of Gotham lifts that things do return to normal for the abnormal city of Gotham.  She traces the fall of her first partner in the MCU, Bullock when he self destructs after the shooting of the Gordon.  The cops found who shot the commissioner but they were unable to prove it.  Harvey took the law into his own hands and the culprit inexplicably disappears which brings Internal Affairs calling.  Bullock resigns and becomes an alcoholic.  Renee gets a new partner in the straight as an arrow, Crispus Allen.  Seeing Harvey starts Renee on her own destructive past as she continues to die inside and forgets who she is.

As The Other History of the DC Universe #4 continues, she describes the newest member of the MCU, Maggie Sawyer.  She is a no nonsense detective who does not hide her own gay orientation.  Renee admires her but realizes that she is not close to the detective.  She tells us about her first meeting with a drunk Kate Kane, as she was working as security for a Wayne event.  She is able to get her to take a cab rather than trying to drive herself home.  Kate gives her her number and Renee keeps it.  She uses it to start a fling with the lesbian socialite that she will meet again later in her life.

She recounts Two-Face’s attempt to create a relationship with her by destroying her life.  First he outs her as a lesbian to her squad mates.  Some of the cops do turn on her.  He then frames her for murder and experiences a save from Batman.  Renee sinks further and further in her fight with her demons.  Her family disowns her and she starts to throw her relationship with Daria away.

She remembers her encounter with the crooked crime scene investigator Jim Corrigan.  This pushes Renee further to drinking and becoming suicidal.  Daria is able to talk Renee off the cliff this time, but it will get harder and harder as Renee sinks further.

She recounts the death of her second partner, Allen as he tries to track down Corrigan.  Renee realizes that she may not have killed Allen, though she still facilitated his death by her own demons and issues.  She hunts down Corrigan and beats him to a pulp finally resulting in her resignation from the department.  Soon Daria is forced to walk out on her or see her die a slow death.

She remembers the Crisis that started with the death of Max Lord at the hands of Wonder Woman that led to the events chronicled in the series “52”.  Renee tells us about her meeting with Vic Sage, the original Question and her team up with Batwoman, Kate Kane and Question.  She experiences the existential questioning of her new partner, Sage as well as his death to cancer.  This death leads her to take up the mantle of the Question and become what she was against in the persona of Batman.  By taking up a mask, she finds herself and learns that she cannot and should not fit in a box.  The closing page is the face of the Question, the new Renee Montoya.

Analysis: The Other History of the DC Universe #4 is not your typical comic story.  There is art which I will get into, but there is no dialogue, just captions in Renee’s own voice.  This is more of an illustrated prose work, probably best described as a short story.

I really liked this approach to a character I have liked, but after reading this, I absolutely adore.  I first met Renee Montoya in Batman: The Animated Series where she was the usual patrol officer used in the crime scenes that Batman investigates.  In this work, Renee describes that life, but as a character, she never stays there.  I am familiar with most of Renee’s life, but to see it put together so succinctly is a marvel of the art that is this story.

The art here does not tell a story, but illustrates Renee’s points and the vignettes she describes.  My favorite page in The Other History of the DC Universe #4 is the one that shows the silhouette of Batman made up of white bats.  On this page, Renee recounts the time she asked the department psychologist to profile Batman.  She profiles him as wearing a mask to right the wrongs of his insignificant life and latches onto an extremist philosophy to give him meaning.  Renee in the end admits that this profile is her in the end and by wearing a mask, she is able to identify who she really is.

The Other History of the DC Universe #4

Both the art and the text create a wonderful history of the DC Universe told through the eyes of one of, in my opinion, one of the most interesting and well-developed civilian characters in Batman lore.  This makes me want a new Question series starring the one and only Renee Montoya. It is one of the best pieces of art I have read in a long time.