Review: Batman and the Outsiders #8 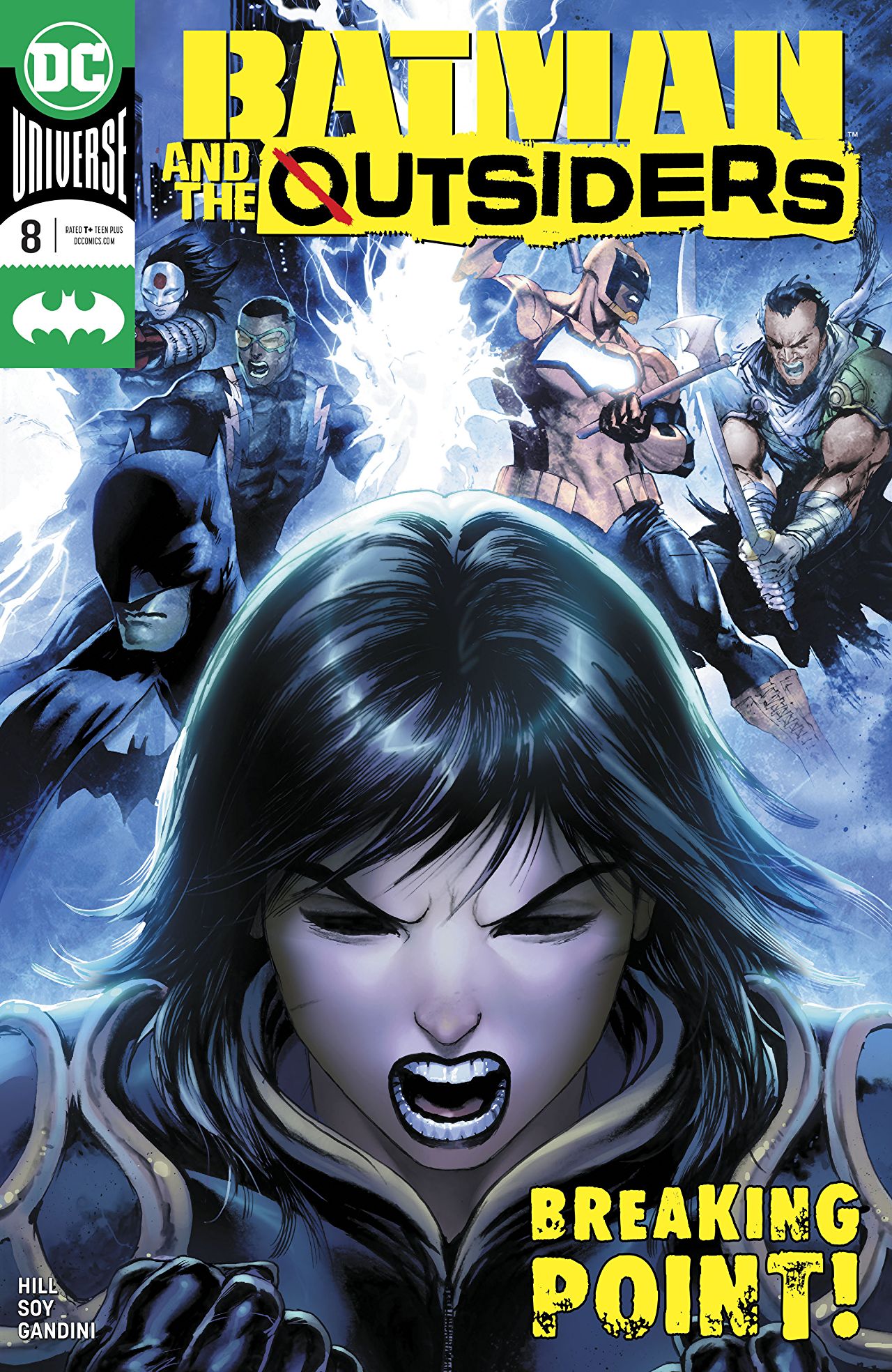 Synopsis (spoilers ahead): As the plane careens towards Gotham City, a police chief lights up the Bat-signal.  On the plane, Sofia tackles Kaliber straight out the door and they plunge towards the lake below.  Black Lightning grabs ahold of Katana and generates a shell of pure electricity and power around them.  The shell destroys the plane, causing the debris to fall harmlessly into the water below and it also floats Black Lightning and Katana onto the dock.  Batman fishes Sofia out of the water and welcomes her to Gotham.

At Wayne Manor, Bruce tells Jefferson about Alfred’s death.  Jefferson offers to help and Bruce confesses to experiencing self-doubt and warns Jefferson that they will come for those he loves.

In the Batcave below, Katana brings Sofia to the Batcave to rest.  Katana explains that they didn’t give up on Sofia because they are the “good guys”.  Sofia decides to sleep instead of having a serious talk with Katana.

Elsewhere, Duke shows Cassandra his new power of controlling and manipulating shadows and darkness.  He tells her that he doesn’t want to tell Batman about it and that he thinks Ishmael was lying about Batman keeping Karma.  Cassandra tells Duke that she can’t feel free until she stops her mother.  Duke gives her a hug and says that they will.

Jefferson makes a phone call to a teacher named Tina at his school.  Tina updates Jefferson with what is happening at the school and Jefferson tells her that he will have to split time between Gotham and Metropolis.  After Tina hangs up the phone, someone appears to kill her.

In Khadym, Ra’s al Ghul and Lady Shiva talk about his vendetta against Batman.  As a car bomb goes off outside an apartment, Ra’s al Ghul lists all the things he has already done to the Outsiders and says he will be the one to offer the cure to their rage and fear.

Analysis: This was a difficult issue to review because it is very well done as an individual issue but I have some big questions about the overall story.  Let’s start with the opening scene with the plane.  I loved the dialogue with the police chief talking about Batman being reliable and the visual of Batman surveying the scene from a building and talking to his dead parents, but Batman doesn’t really do anything to stop the plane.  I’m also confused about why and how the green symbol appears in the sky over Gotham.  But in any case, the way Black Lightning destroys the plane and saves himself and Katana was a really cool use of his powers.  Soy and Gandini deliver yet another outstanding set of pages for this scene.  I don’t know enough about Black Lightning as a character to say if there is any precedent for using such a power (he does mention he hasn’t done it before), but I think it’s a good addition to his power set.  And there’s even more sexual tension between Jefferson and Katana for you people hoping to see the characters explore their unspoken feelings for each other (I am one of those people).  The last big question I have about this opening scene is: where is Kaliber?  Batman gets Sofia out of the lake (the panel of Batman standing on the dock with his cape billowing in the wind is outstanding), but Kaliber just disappears.  Batman isn’t the type to take betrayal lightly and given that he observed the fall, I feel like he would be tracking him.  But perhaps there is more going on off panel that will be revealed later.

The conversation Jefferson has with Bruce and the one Duke has with Cassandra are very similar, and both are well done, in the sense that they are concise and simple but also have an emotional depth to them.  Bruce’s parting words to Jefferson obviously foreshadow what happens at the end of this issue and will likely be a test for Jefferson in the following issue.  Now here is where I have questions about how this fits into the events going on in other titles.  Bruce talks about Alfred’s death with Jefferson which means this is happening around the same time as the City of Bane arc.  I’m all for connectivity between the different DC titles, but I really don’t see how this series and the main Batman title could be happening at the same time.  As a reader, I just assumed they were taking place at different points in time.  Bringing up Alfred’s death, even though it made for a good conversation between Bruce and Jefferson, took me out of the story a bit as I tried to puzzle out how the stories fit together in the timeline.

I’m looking forward to the next issue as there are so many interesting threads still to be explored in this story.  Duke’s new powers and decision not to tell Batman, Sofia’s internal struggle, the whereabouts of Kaliber, Cassandra fighting Shiva and fighting not to become Shiva, Jefferson finding out Tina was likely murdered, Bruce being plagued by self-doubt, Tatsu’s struggle to free her husband from the sword, and Tatsu and Jefferson’s burgeoning romantic chemistry are all subplots that are in play.  Hill has done a great job engaging all members of the team in some form of unique struggle that is compelling to the reader all while balancing it against the external threat of Ra’s al Ghul.  This is not something typically found in team books and I appreciate it being executed well here.  As you may have guessed from my earlier comments about the art, I really liked it.  Seriously, I need poster versions of some of these panels.

Final Thoughts: A visually impressive story that also balances emotional moments with intense action sequences.  This is an issue I’d recommend picking up.